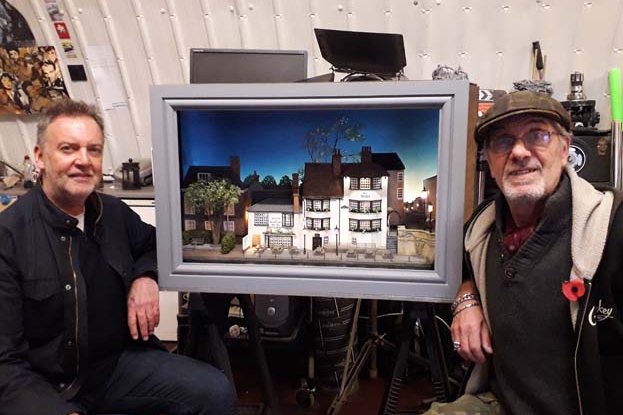 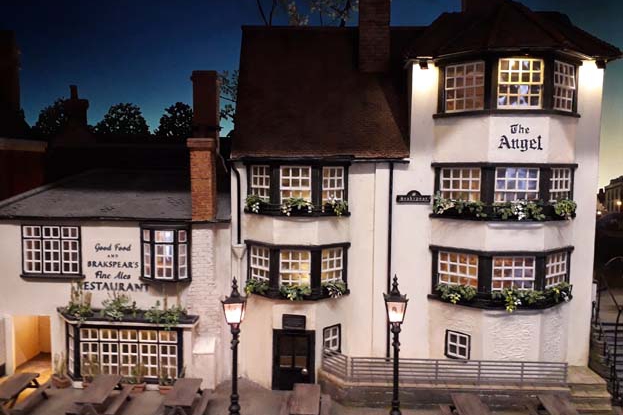 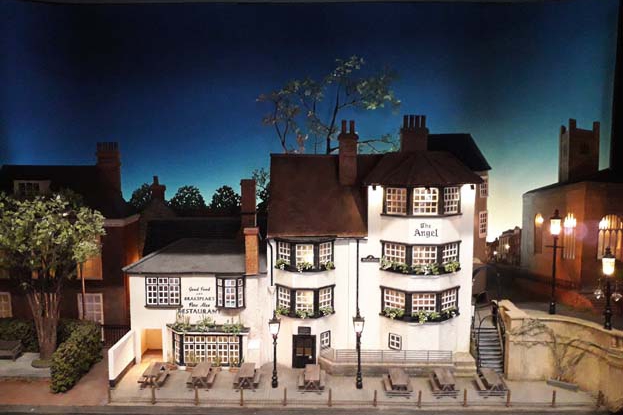 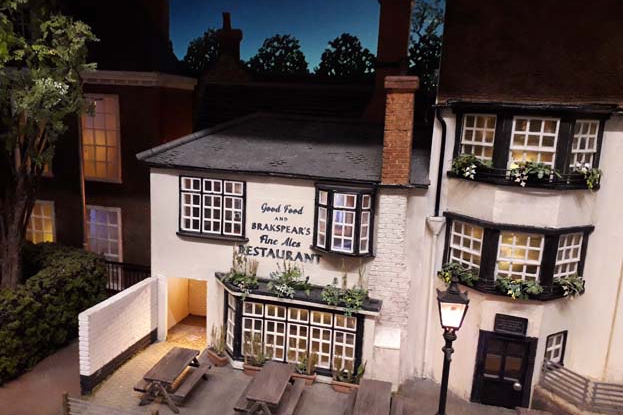 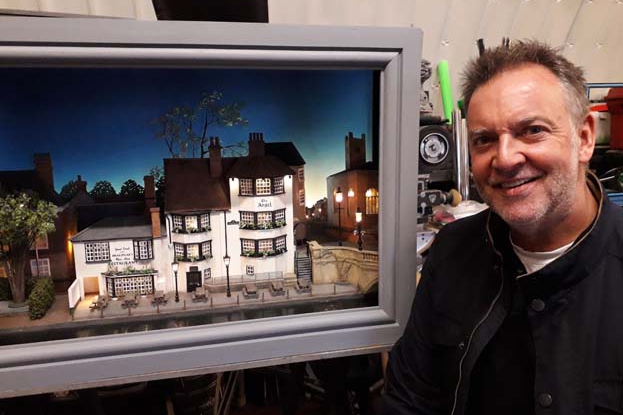 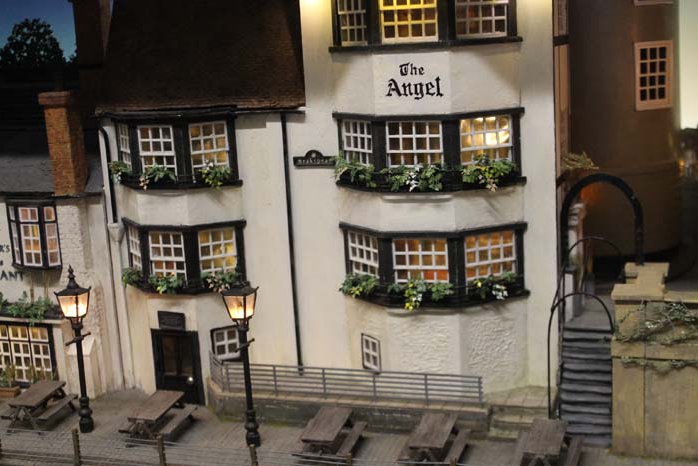 The iconic Angel on the Bridge pub was chosen by a private client of Mattes & Miniatures for them to create a miniature model for their client’s personal collection.

The detail on the model which is made from wood, plaster and 3D printed elements is jaw-dropping (the pictures above don’t really do it justice). From the ornate lampposts, the uneven steps leading down to the terrace to the minute flowers in the flower boxes everything has been recreated with such precision.  Looking through the windows you can even see the exact décor – this has been taken from images downloaded from Google Streetview! The framed model measuring one metre wide by half a metre high is also fitted with lights and when switched on gives a truly atmospheric feel to both the pub and Hart Street behind.

Leigh Took and his daughter Lauren built the model after they were approached by the client through their website. Leigh said, “The client is a collector of architectural models including the likes of the Royal Opera House but he said to us to choose something from around here.  We sent him photos of all sorts of buildings including Windsor Town Hall but he chose the Angel on Bridge.”

We were delighted to take landlord Mark Dunlop who has been at the pub for 12 years to see the model at Mattes & Miniatures workshop in Holyport last week before it was being delivered to the client in London.

Leigh’s model making business has seen him build models for films such as The Da Vinci Code, Band of Brothers, The Wolfman, for music videos for Dire Straits and Bijork and commercials for Diet Coke and Cadbury’s.

The process of building the pub model started with taking lots of photos, Photoshopping them and then creating the sizes and printing them out on to cardboard before then building each of the actual wooden parts in sections.

Leigh was a student at King James College in Henley before it became The Henley College where he studied Art A Level.  Leigh added, “I was delighted when the client chose the Angel as it was very personal to me as I had spent many happy hours in the pub when I was younger.”

The model has taken over a year to complete as the client wasn’t in a rush and this meant that Leigh and Lauren could fit it in around other jobs.  Leigh commented, “It probably took over 100 hours or more but we don’t really know how many but it has evolved over time and has been a collaborative process with the client being very much involved in the decisions about the lighting.  He’s never actually been to the pub though.”

Asked what Leigh’s favourite part is, he replied, “creating the forced perspective so the model is compressed to the right size” and the hardest part? “balancing of the lighting to give it the right atmosphere.”

Mark’s reaction was brilliant to see and his response was, “Wow, it’s amazing, stunning and you have amazing talent!”  Afterwards he offered Leigh, Lauren and the model owner an invitation to the pub to have a drink with him.

This isn’t all The Angel on the Bridge pub news this week.  Last week The Guardian newspaper included it in their Ten of the Best Pubs with a View stating “For those who prefer their views more landscaped than wild, this pub is next to Henley’s elegant Georgian bridge, at the point where Oxfordshire meets Berkshire. The river is placid, the ducks entertaining, the air clean, and sunsets and mist keep the view varied all year round. The Angel ought to be a snooty tourist trap but remains a proper pub, with proper ale – Brakspear is a true Oxfordshire classic. The pub even has its own moorings for people with boats – or you can just wear deck shoes and pretend!”