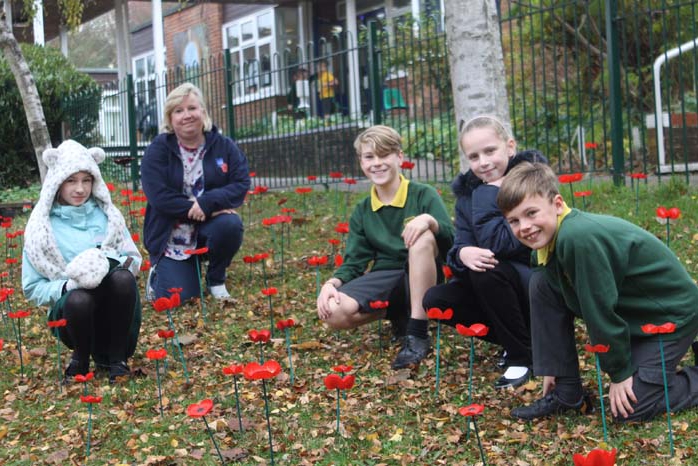 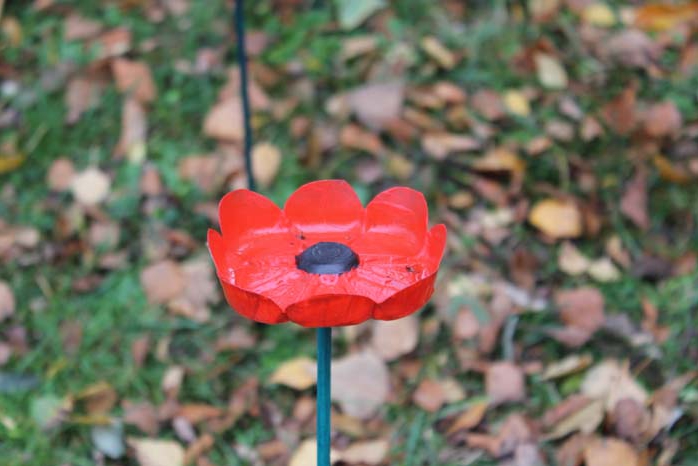 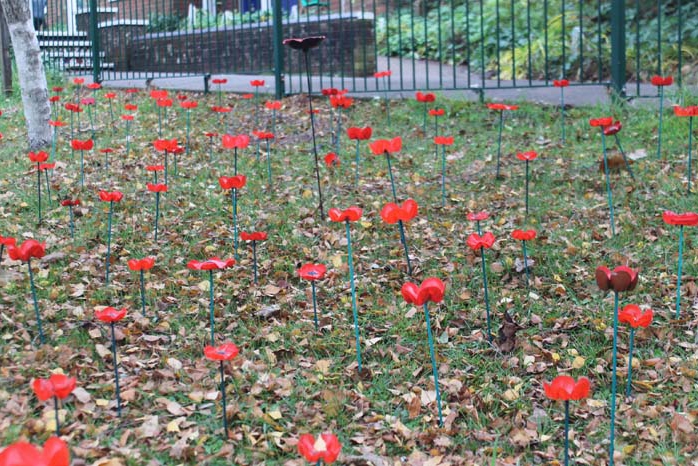 There’s a stunning entrance of poppies at Valley Road School.  Take a closer look and you’ll see that 280 poppies are been made out of plastic bottles.

The idea for the school to create this art installation was Teaching Assistant, Karen Allen.  Karen said, “I saw the idea online and made a few myself and then the idea magpied into a full school project when Tim (headteacher) said let’s just do it. We thought we should do something special to mark the WW1 armistice centenary. Each child was asked to bring a plastic bottle of any size or shape and then I cut them into the poppy shape and then each child decorated it with acrylic paints.  I then hot glued the stems on.”

Headteacher, Tim Coulson said, “It is a wonderful, simple and effective idea and it is a beautiful thing to have.  It is so highly creative and it is very different and that’s why I love it.  It is also a great celebration to mark the 100 years of the end of the First World War.”

Along the fence behind the poppies, there are collection boxes for donations to the Royal British Legion poppy appeal. 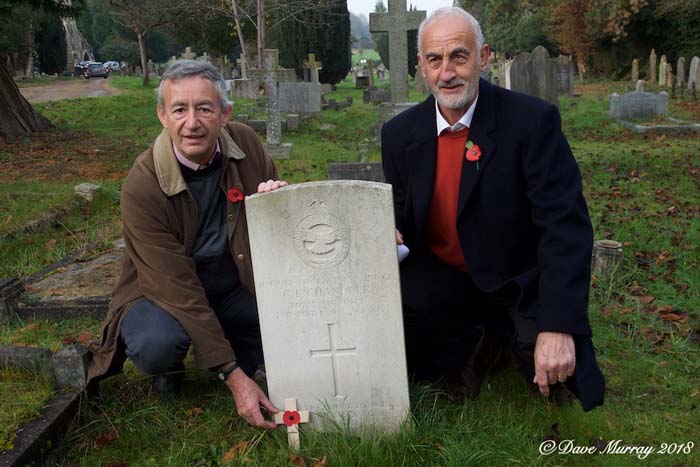 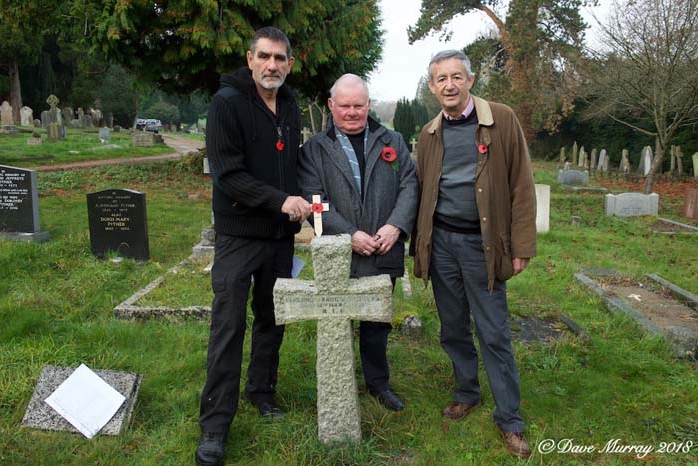 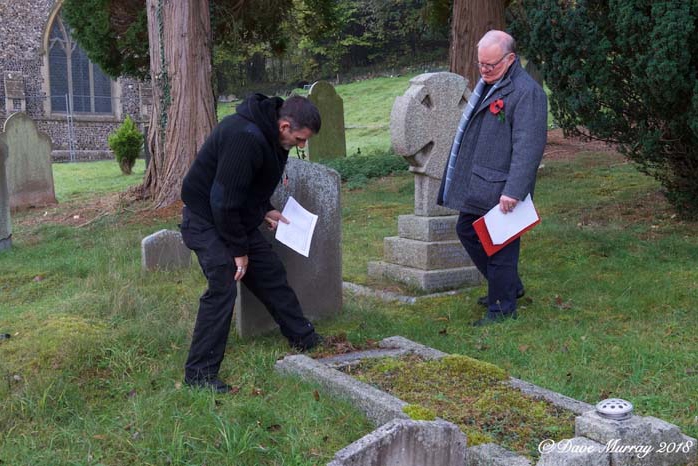 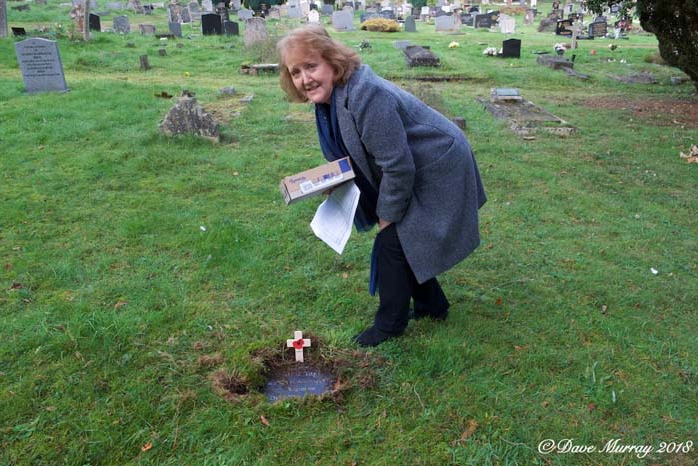 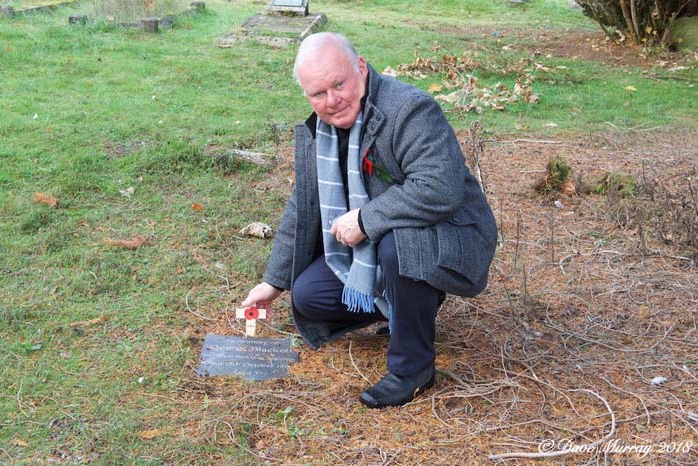 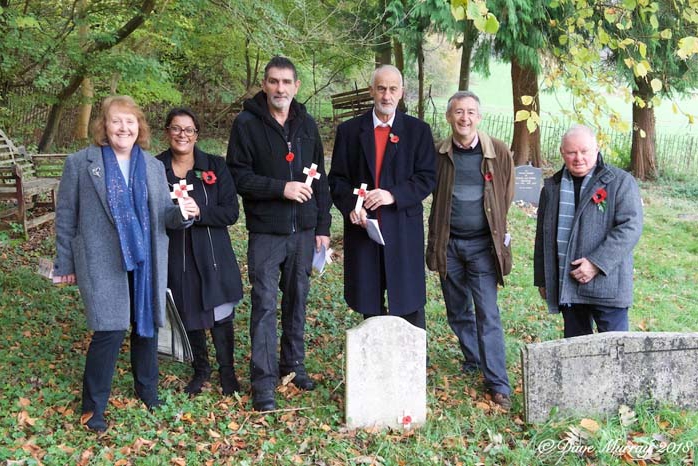 For the first time, the war graves at Henley Fairmile Cemetery have had a wooden remembrance cross placed on them this year.

The idea was Henley Town Clerk, Janet Wheeler’s who said, “We used to do this at my last Council (Amersham) every year and I thought that we should do it in Henley to show the families that we care and especially this year to mark the 100th anniversary of the end of the First World War.”

Councillors Eggleton, Arlett and Nimmo Smith were joined by the Mayor’s PA, Leena Wisely who also looks after the cemetery and Mike Willoughby from the Lest We Forget Project to help Janet.  They added crosses to 24 graves, three of which were unmarked and they also found a couple of other graves that were overgrown.   The graves were those of serviceman who died in both world wars or who had served but died of injuries or sickness resulting from the conflicts.  Mike helped Leena identify the WW1 graves.  He said, “I was very happy to help out by supplying a list of the WW1 soldiers in Fairmile Cemetery and was extremely pleased to be invited to accompany the Town Clerk and Councillors in the laying of the poppy crosses.”

Janet afterwards added, “I’m going to ask the Park Services to come and tidy up the graves that we uncovered today so that the headstones will be visible again.” 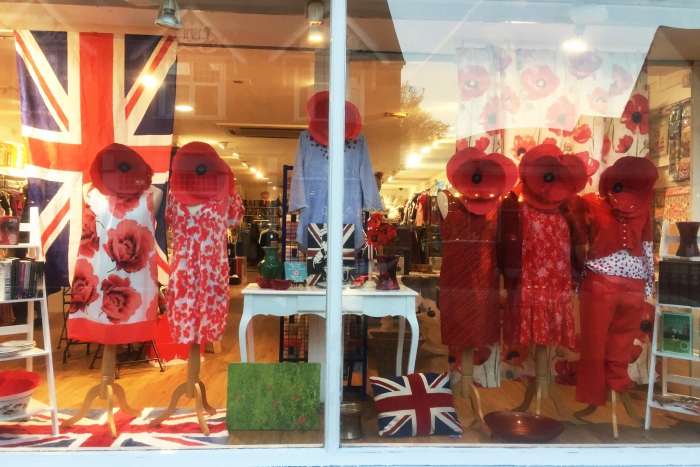 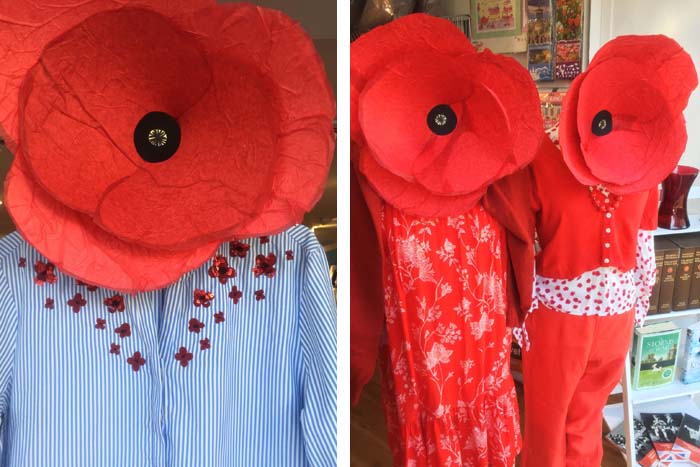 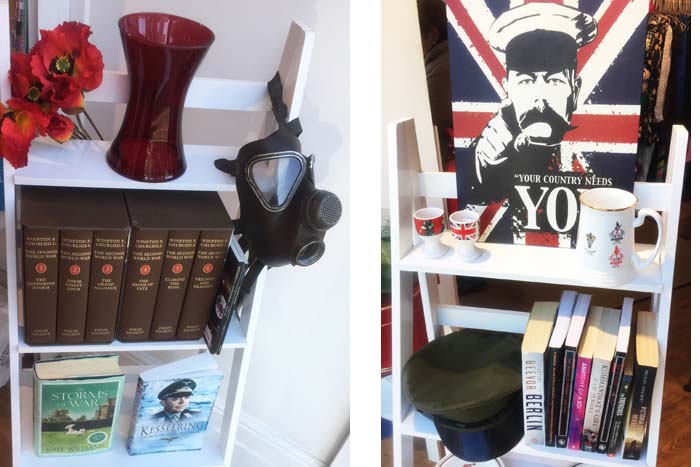 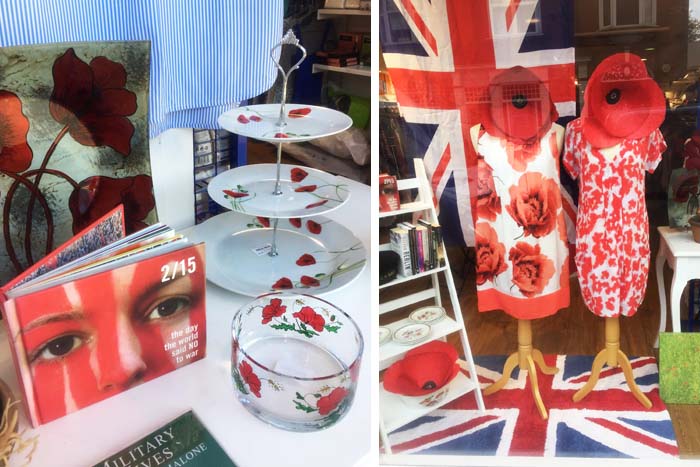 Many shops in town have changed their display to mark Remembrance this year.  Amelia Staines, Assistant Manager at the Sue Ryder Shop in Duke Street has designed a very impactful Remembrance window.  She said, “I decided to design a poppy window to support Remembrance. The poppy being a symbol of hope.  I used paper and red tissue paper to make the giant poppies. During the last few weeks everyone at the shop has been collecting poppy related clothes and bric a brac and putting them to one side in our sorting room – in readiness for this week.

We are very fortunate in Henley as we get fantastic donations.  Over the last few weeks our donations have included some fabulous Winston Churchill Books all about The Second World War, a gas mask, Naval cap, Military cap, some poppy plates, cake stand, china bowls, bunch of silk poppies, poppy curtains, a union Jack rug and cushioned also many books, both novels, real accounts of war and some fabulous war time cook books.”

Amelia loves to decorate the window and she’s won the Christmas Shop Window competition in 2016 with her See Amid the Winter’s Snow snowflake window and she came third in last year’s Save the Bees summer competition.

Spotlight on a Poppy Seller 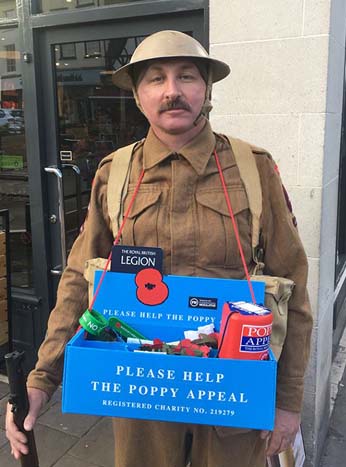 Richard Pinches is a WW2 8th army re-enactor displaying at history shows with a recreation of an 8th army outpost and minefield scene. Richard said, “I do this because my late father was in the 8th Army and I have always had a big interest in this part of history. My display is there to educate and  to display my military collection. I am also collecting stories from relatives of other 8th Army veterans from that stop to talk to me. I have a YouTube channel where I have my father talking about his experiences and I am collecting other stories from remaining veterans.” Richard’s display features an interactive minefield for children to use his mine detector to find his fake mines. Or they may step on one of his whoopee cushions! Richard gives a little talk on the types of mines which which would’ve been used in the desert. Richard said, “I joke about the helmet bring the only protection they would have had as the servicemen were only worried about their hair! Then I show the photograph in the helmet of my mother that my father took to war.”

Richard has been collecting for the Poppy Appeal at the last three shows he has taken his is display to – the Military Odyssey, the Victory Show and 1940s weekend at Hughenden Manor. 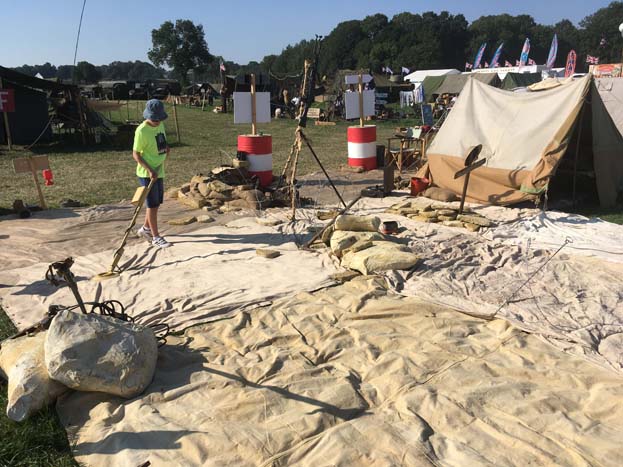