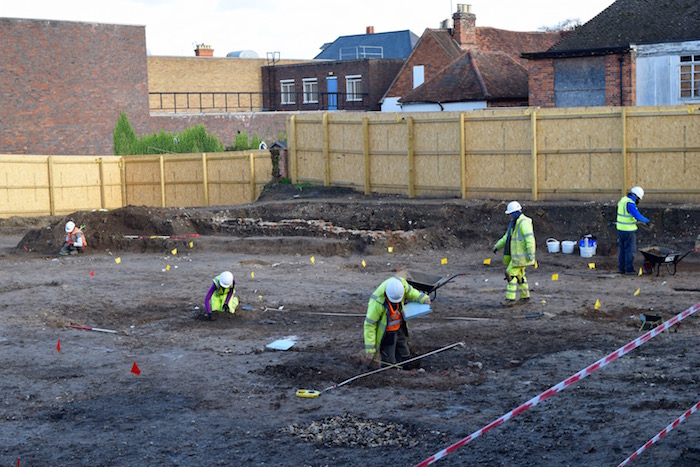 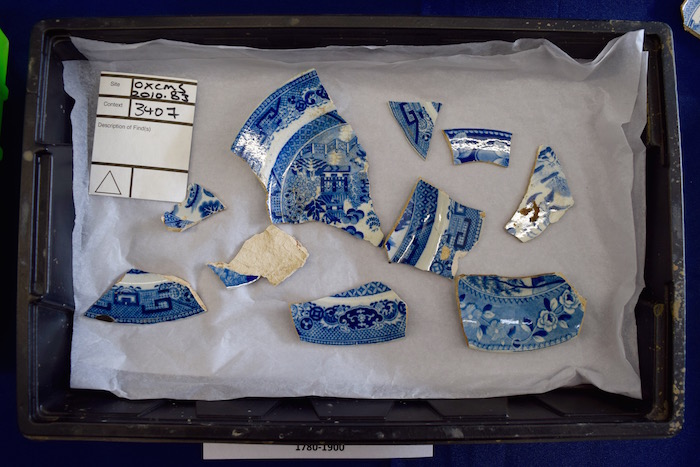 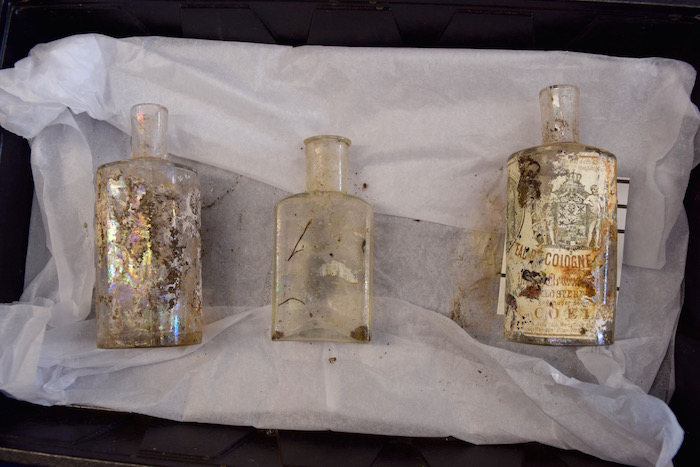 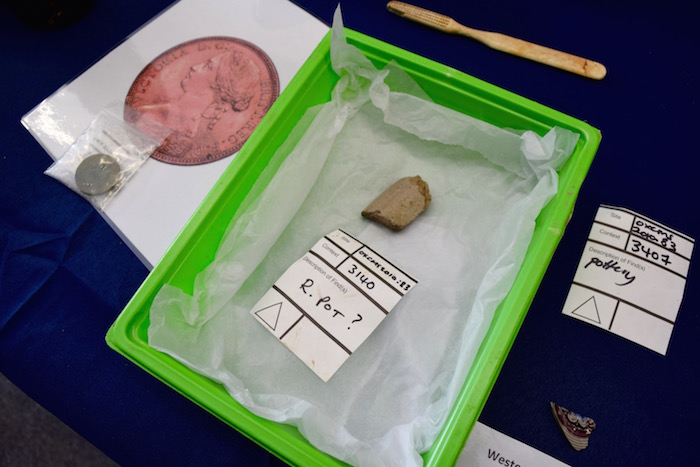 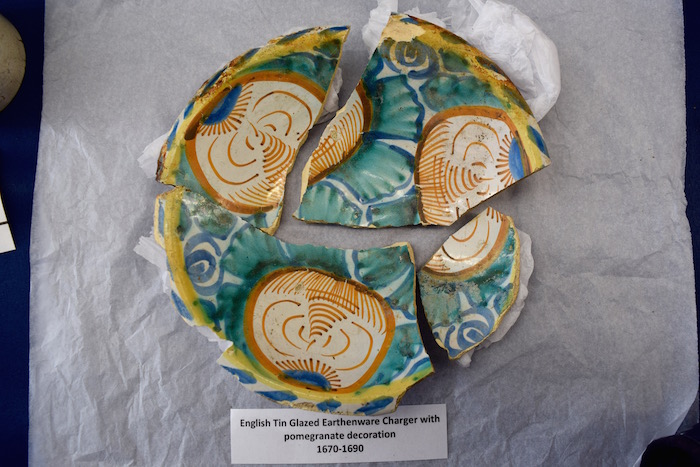 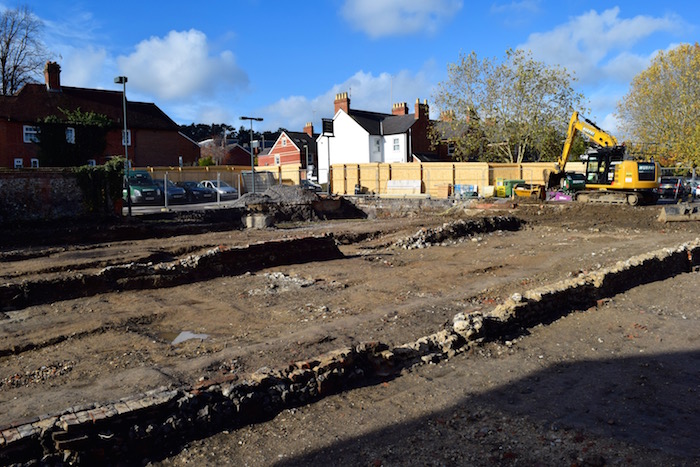 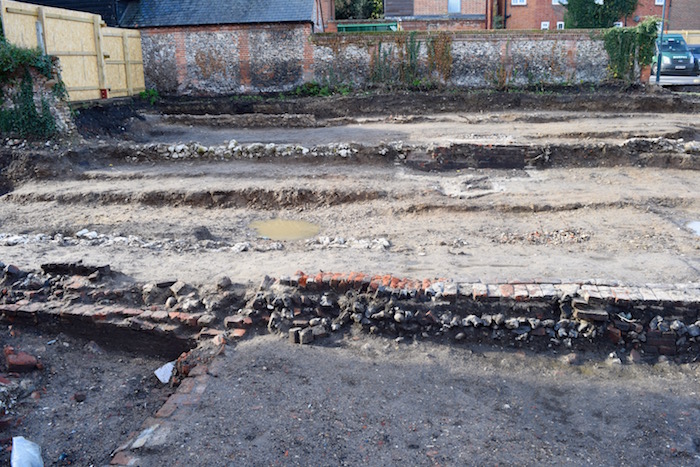 The archaeological site at the former Market Place Mews, currently under excavation, has unearthed a number of fascinating artefacts and details about Henley’s history. After the discovery of the old medieval plots was made in October, the team from AOC Archaeology Group have been working tirelessly to piece together the remnants of Henley’s forgotten past, supported by the Gardiner Place development and its contractors, J Murphy and Sons. Having already uncovered the old walls, along will many post-medieval items, and a tiny piece of Roman pottery, the question still remains as to how much further back in time the exploration will go.

So far, the excavation has found an array of pottery and glassware, mostly from the late or post-medieval period. Cologne bottles, soda glasses and ceramic plates are just a fraction of the artefacts that have been brought to light; the collection also features old clay tobacco pipes, a toothbrush handle and butchered animal bones. A few items have specific ties to Henley, such as a soda glass inscribed with ‘Market Place’. The oldest piece identified is a small fragment of Roman pottery. Discovered in the post-medieval layers, its origin still remains unclear. Natalie, from the AOC Archaeology Group, explained, “It’s either from somewhere nearby, it may have been disturbed when they were building on this site in the post medieval period, or there might be something deeper down. We could have Roman archaeology; we just don’t know yet.” Each item will be sent to its respective specialist for more in-depth analysis.

Archaeological work began on the Gardiner Place development site in late September as required by its planning conditions. “Very quickly, it became clear that we had archaeology,” said Gwilym, from the AOC Archaeology Group. “For another 2 weeks, I stripped the area to reveal 9 burgage plots (30, 28, 26, 24, 22, 20 and 18 Market Place, and 9-17, 25 Bell St). It’s already apparent that these burgage plot walls represent the original burgage plots, as far as we can see, established sometime in the late 12th/13th century when Henry II ordered land to be bought at Henley. Unlike many towns, these have neither been agglomerated, nor sub-divided, so it’s quite interesting that as far as we can tell they haven’t appear to have changed significantly.” The findings, including the walls, are being mapped and recorded before being removed for analysis.

The site remains closed whilst the archaeological digging is underway, although the Henley Archaeological & Historical Group were lucky enough to have had a tour which we were invited to join yesterday (Tuesday). Work on the Gardiner Place development has also been affected by the excavation, and has temporarily ceased on the eastern section of the land. Contractors J Murphy and Sons have been extremely cooperative in the ever-changing archaeological process; originally set to take 4-5 weeks, the digging has now been expanded to 12 weeks, and may go on yet further depending on what’s revealed.

Having begun in the 1700s to the Victorian period, the archaeologists are now on phase two of the project, revealing the late to post medieval horizon. “Perhaps problematically is that we don’t have anything earlier yet,” stated Gwilym, “which might indicate that when we’ve excavated this and we take this horizon away, we might have a further archaeological horizon buried beneath this which is going to add a little bit of time to our programme and will have a knock on effect on Murphy’s. And indeed, should there be a horizon beneath this, we then have to assume that it extends all the way to the west.”

Despite the delay that it’s caused for the Gardiner Place development, the archaeological finds have huge value in understanding the origins of the town. The garden features currently being revealed seem to match details on an old map which, Gwilym explains, gives it greater trustworthiness. He also adds, “We will be able to construct, if you like, a life path of each plot from the Victorian period back almost to the founding of Henley, which will give us an idea of each plot’s relative wealth, and perhaps poverty, throughout time. We will also be able to compare each of those plots across within this quarter, so we can plot the general life path of this part of Henley. We’ll be able to compare a house here from 1600 with its neighbours and see how it failed or succeeded in keeping up with the Joneses. The beauty and the exciting opportunity gives us the complete picture of this area.” 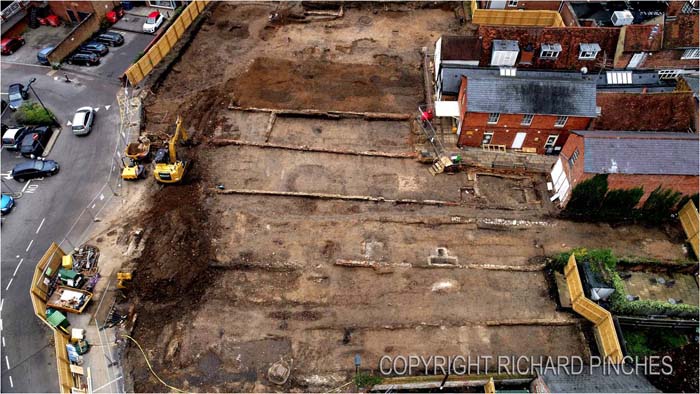