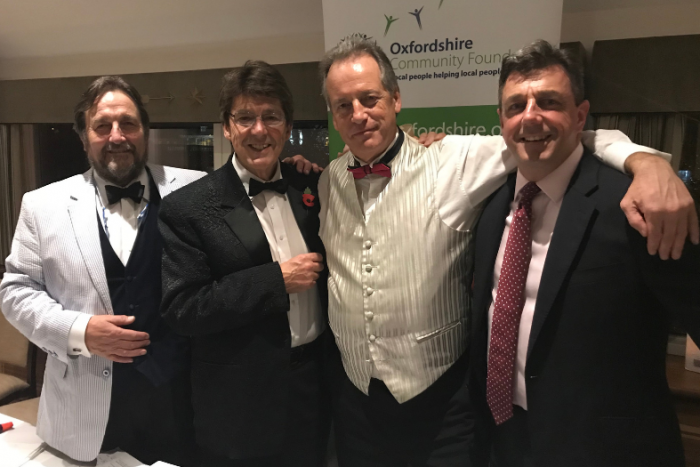 Over 80 guests took part in a fun and unique wine tasting at Henley’s Leander Club, and learnt about charities tackling deprivation in the town last Friday night.

Oxfordshire Community Foundation (OCF) welcomed guests to ‘Call My Wine Bluff’ – a hugely entertaining game that pits the wits, wine knowledge and intuition of the audience against the deviousness of a panel of bluffers. During six rounds of tasting, three panellists each gave an amusing, informative and highly convincing description of the wine. Two of them were bluffing, whilst the other was telling the truth – and the eight teams had to decide which was which.

The wine, panel and compering were provided by regional wine merchant Oxford Wine Company, owned and managed by Ted Sandbach. He was joined by fellow panellists Robin Shuckburgh, a food and drink presenter, and DJ and broadcaster Mike Read. The panel’s descriptions included exotic anecdotes, jokes, poems and even a couple of musical interludes on the guitar.

During the tasting guests enjoyed a four-course meal, culminating in the winning table opening their prize – a bottle of champagne – with a sword! The event was attended by the Mayor of Henley, Councillor Glen Lambert, and the Lord Lieutenant of Oxfordshire, Tim Stevenson OBE, who is also OCF’s President.

The event was hosted by OCF in order to raise awareness of some of the invisible but severe deprivation that exists in Henley, where despite the town’s wealth and privilege, there are 1,400 people with no educational qualifications at all, and 14% of children in the west of the town are living in poverty. During the evening guests heard from OCF’s Chief Executive Jayne Woodley, who described the charity’s work to research the social problems and needs across Oxfordshire, and use funding and other support from individuals, businesses and trusts to direct grants where the need is greatest. In 2017–18, OCF made over £1.2 million in grants to nearly 200 different charities and community groups.

There was also the opportunity to hear from NOMAD Community Project, a charity in Henley that has received over £43,000 from OCF over the years. Family Support Worker Sue Prior described how NOMAD has helped many families in Henley affected by alcoholism, drug use and family breakdown. Her colleague Michelle Payne, a former beneficiary of NOMAD’s services, spoke of her own experiences, saying: “I was neglecting all my parenting duties because of my alcohol addiction. NOMAD helped my children get on the straight and narrow, and then cared for and supported me when I was diagnosed with liver cancer. In truth, I wouldn’t be here now if it wasn’t for NOMAD.”

As the evening closed, OCF Chair John Taylor reminded guests that Oxfordshire has some real pockets of deprivation, as demonstrated by their research report Oxfordshire Uncovered. To tackle this inequality, OCF gives away money, but is also convening projects around homelessness, loneliness, and educational inequality, bringing together charities, businesses and local government to work towards common aims.