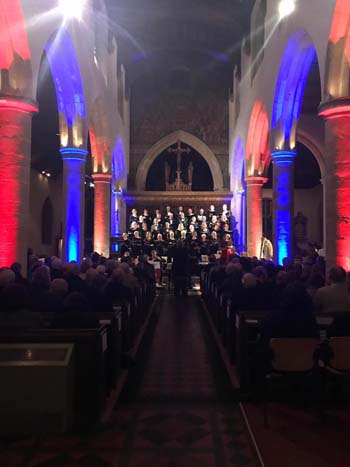 The Aliquando Choir’s concert for the Royal British Legion Poppy Appeal on Saturday (10 November) to mark the WW1 Armistice centenary was a huge success.

The first half was pure music, from Bruckner’s ‘Libera me Domine’ sandwiched between his  Aequale No 1 & 2 for three solo trombones, Ola Gejlio’s ‘The Ground’ and finally the superb rendition of Patrick Hawe’s ‘Song of Songs’ by soprano Lisa Rijmer backed by the choir.

The second half of the programme was reflective and thought-provoking, with wonderful readings and music specially chosen to give deference to the occasion. The Royal British Legion Henley & Peppard Standards processed up the centre aisle followed by Henley cadets from the three services who were proudly and superbly turned out.

Music and readings preceded the ceremonial part, the Exhortation, Lux Aeterna set to Elgar’s Enigma Variations, The Last Post and Kohima Epitaph followed by the National Anthem, brought an end to the evening.

Anne Evans from Aliquando said, “We were privileged to have the Mayor of Ors in attendance, visiting from the town where Wilfred Owen, the great war poet was buried.”

A comment from a member of the audience says it all ‘”This memorial concert was really beautiful and truly inspiring.  For me, because it was in St. Mary’s Church in Henley, where I have lived for many, many years, and participated in by local people, it meant more and made me feel more deeply than if I had been at the big memorial in London.” 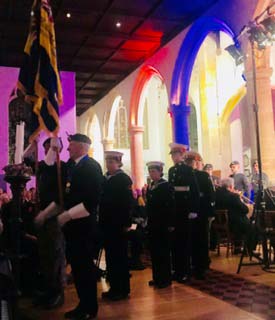