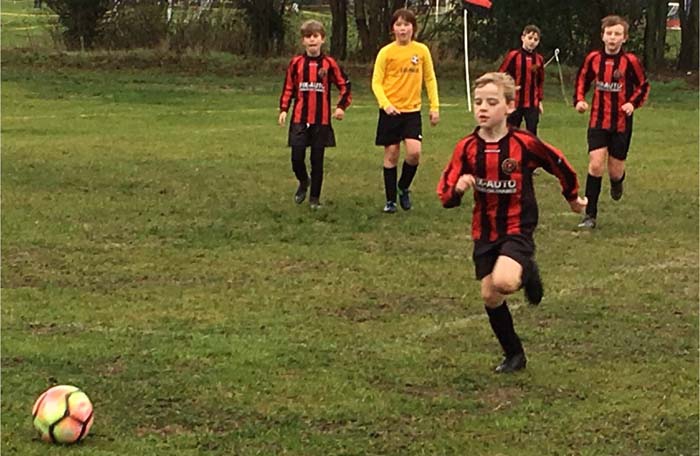 On this first day of December, the players and their supporters gathered around 10.30 am, all glad to see the back of heavy rain that swept over Henley earlier in the morning. The pitch at Jubilee Park however was absolutely perfect and the 8 AFC players all gathered in time for this very import Cup game.

AFC Henley Hotspur immediately got off to a good start and players seemed totally tuned into each other. Ball passing was seamless, the game flowed, and the whole thing was brilliant to watch. Henley Hotspur created numerous chances in the first 10 minutes, but for some reason the ball did not hit the back of the net. Despite Henley’s dominance, one could sense the doubt creeping in towards the end of the first quarter, and the Colts becoming more confident.

This sentiment continued into the second quarter, and culminated in a goal from the Charvil Colts early on, making it 0-1. Despite the setback, Hotspurs continued to believe in themselves, and kept on pressing. A superb cross from Freddie Attwood resulted in a goal (albeit via one of the opponents), making it 1-all by half time.

In the third quarter, several Henley players created a number of chances again, but Charvil’s goal keeping was extremely solid. After sustained and continued attack, finally, to the relief of all present, Harry Alderton managed to score a superb goal and all spirits were lifted at this stage. The score remained 2-1 in favour of Henley for the rest of the match, despite a nerve wrecking fourth quarter.

Player of the match: Roxanna Schoenmakers for defensive actions.