5 December – Ma Bessie Gets Down by the Riverside 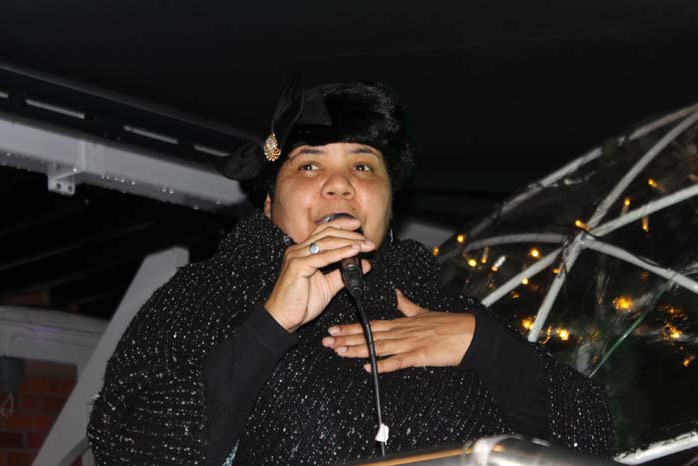 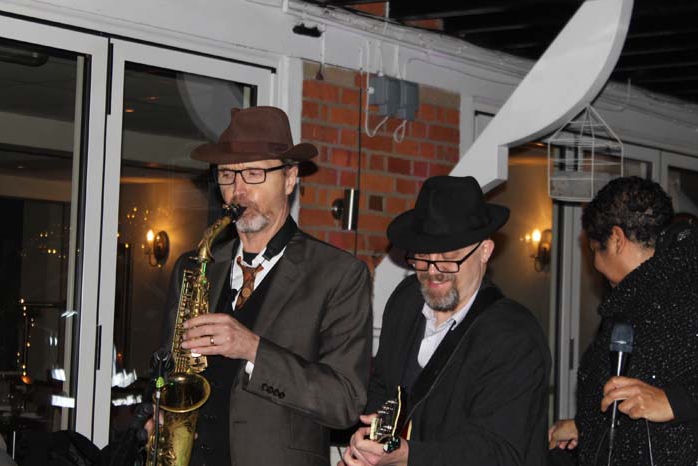 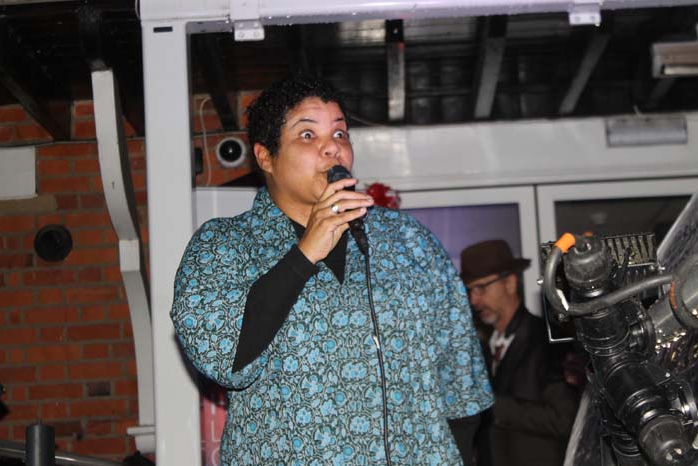 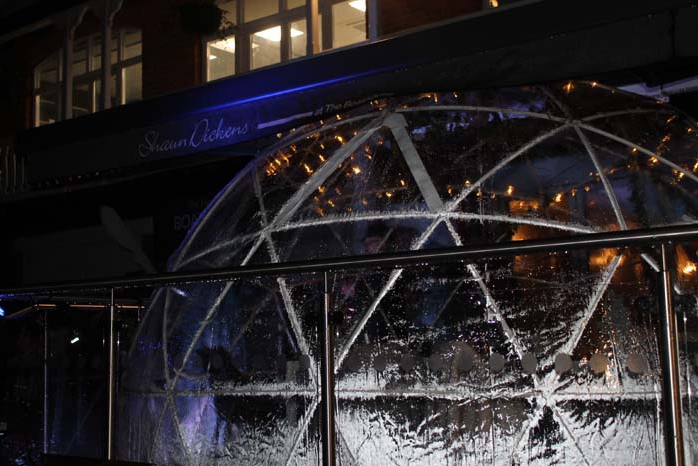 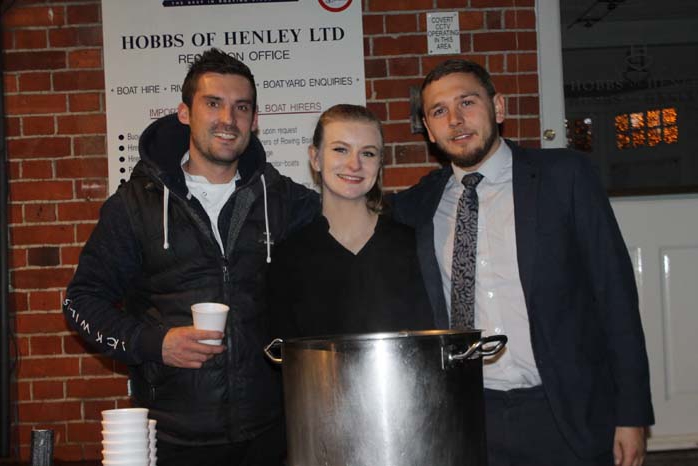 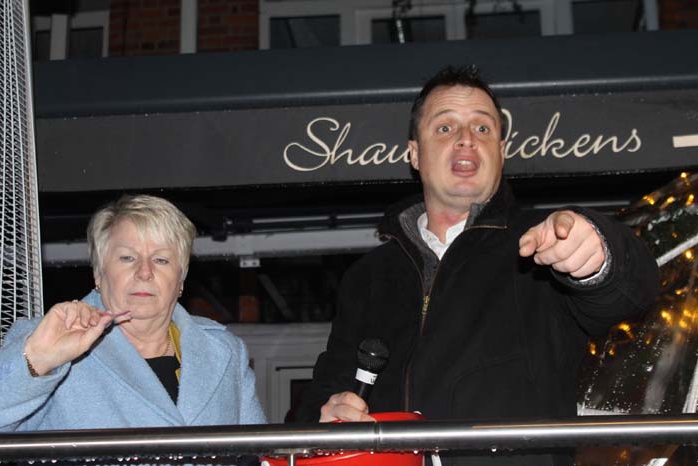 Classic blues and jazz by Ma Bessie and Her Pigfoot band were the surprise act on night 5 of the Living Advent Calendar on the terrace at the Shaun Dickens at The Boathouse in Station Road.

Lead singer Julia Titus (Ma Bessie) was joined by Matt Foster on the guitar and Chuck Lloyd on the saxophone.  The played a set of Careless Love, Whip it to a Jelly, Down by the Riverside and Amazing Grace helped by Sophia in the audience on the shaker.

The raffle was raising money for two charities – Margaret Clitherow Trust (supports Traveller communities) and Home for the Good (fostering charity) and the evening was sponsored by Manning UK, insurance specialists.

6 December – World Record Number of Singers in a Kitchen?! 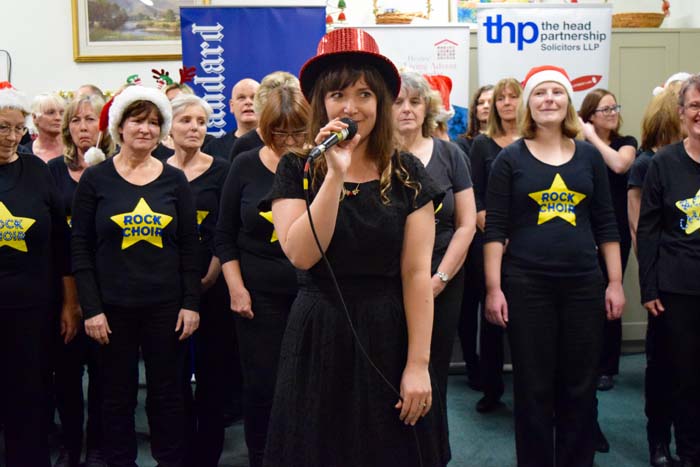 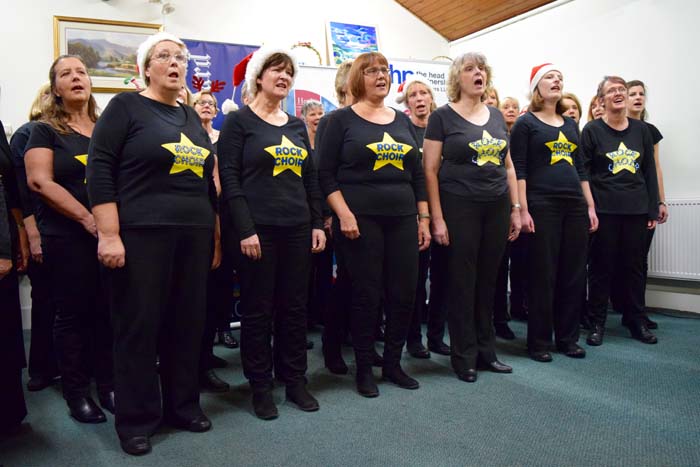 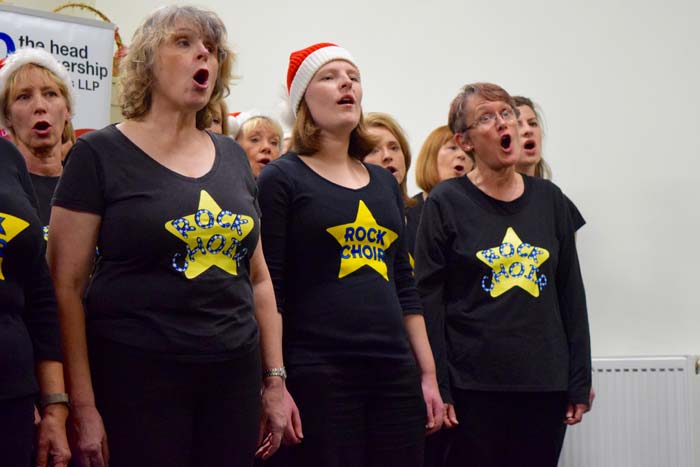 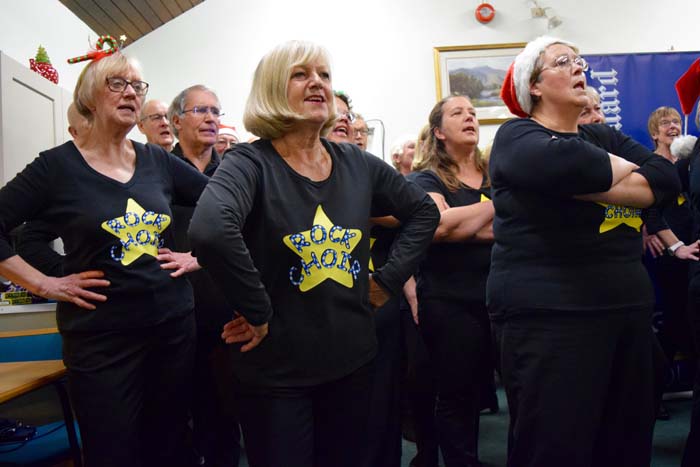 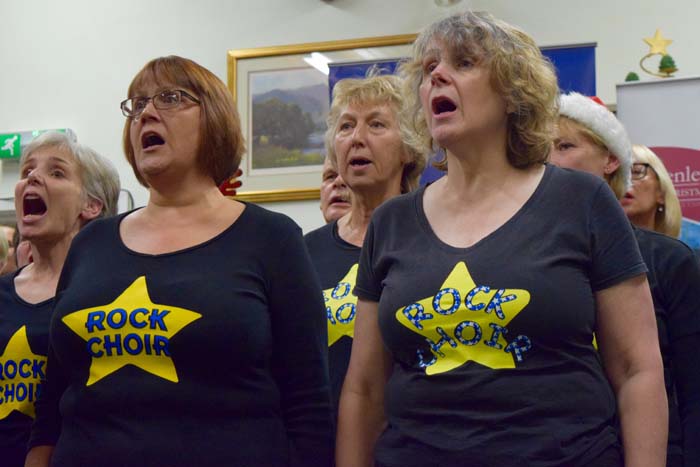 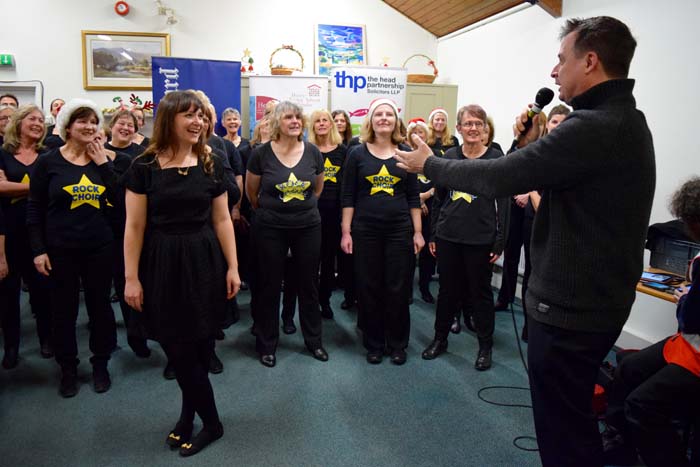 The 6th day of the Living Advent Calendar opened the Over 60s Club kitchen door to reveal the ever popular Henley Rock Choir. A favourite in the annual Advent Calendar line-up, the singing ensemble did not disappoint with their pop hits and Christmas classics. The choir, decked out in Santa hats and other festive headgear, clicked, clapped and side-stepped their way through a collection of familiar songs.

In true Rock Choir fashion, the opening number of ‘The First Noel’ soon took an unexpected turn when they performed a mash-up with ‘Silent Night’. ‘Hallelujah’ and ‘Merry Christmas Everyone’ gave the crowds some more Christmas cheer, whilst their energetic versions of ‘Footloose’ and Justin Timberlake’s ‘Can’t Stop The Feeling’ had everybody toe-tapping.

The group certainly proved deserving of the title of “the happiest act in the whole of the advent calendar,” according to organiser Richard Rodway. Of course, with their Christmas party at Magoos on the cards for later that evening, who wouldn’t be feeling sprightly!

The sixth night of the Calendar was sponsored by Knox & Eames accountants, and Pielicious Ltd were on hand to serve sausage rolls and wine. All proceeds from the evening went to Wyfold Riding For The Disabled, an independent local charity based between Stoke Row and Peppard. The organisation offers horse riding and driving lessons to disabled adults and children in the area, with 75 people of all ages visiting every week. Though next year will be the charity’s 50th year, 2018 has shown to be a challenging one. Jill, a volunteer for the charity, explained, “Although for us, we had a beautiful summer, for the ponies it wasn’t because they had no grass to eat, so we had to provide hay for them all summer. Usually we just provide hay in the winter, so our hay bill has doubled this year.” The money raised from the Living Advent Calendar will be a tremendous help to the Wyfold Riding For The Disabled centre.

However, fundraising and musical marvels weren’t the only achievements for the evening. “As well as raising money for a very deserving charity this evening, we’ve also I think broken a world record,” announced Richard Rodway. “I think we have officially set the world record for the number of performers crammed into a kitchen!”” 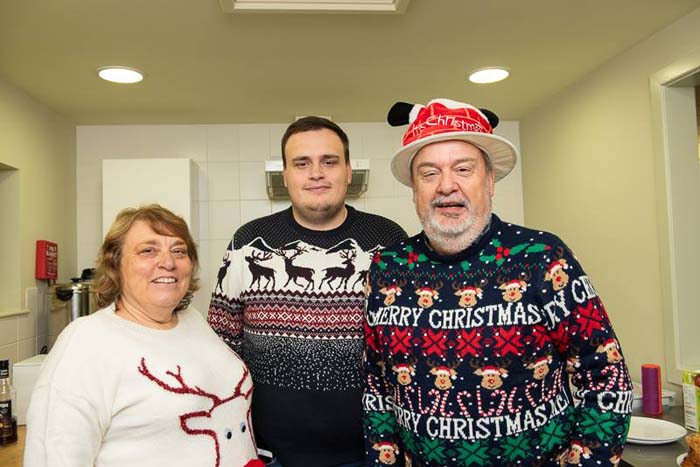 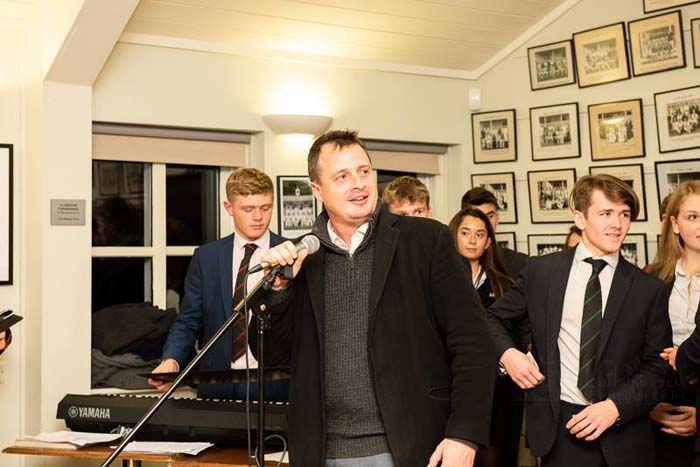 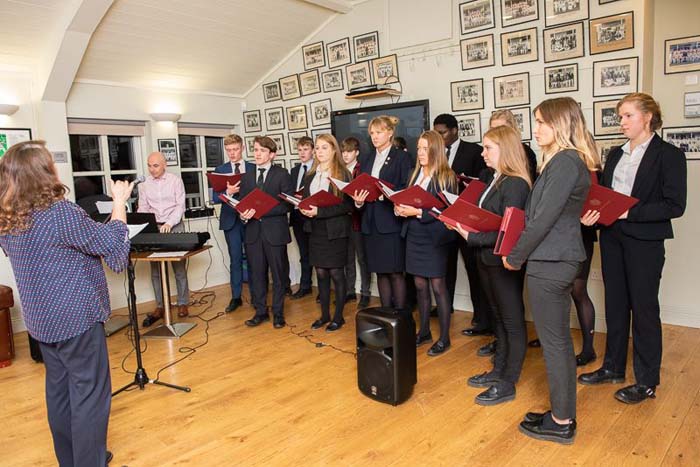 Henley Cricket Club pavilion was the venue for night 7 with the surprise act being the Shiplake College Choir with a festive set of Christmas songs.

After a great debut performance at the LAC last year at The Angel on the Bridge, Richard Rodway, the organiser was keen for them to return.

The evening was sponsored by GPC Marketing and the raffle was raising money for Badgemore School.   Lawlor’s the Bakers provided delicious lardy cake.

8 December – The Not So But Fun Youthful Orchestra! 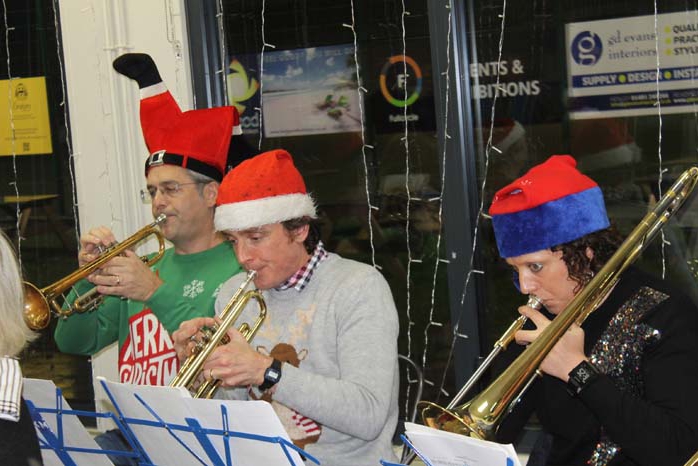 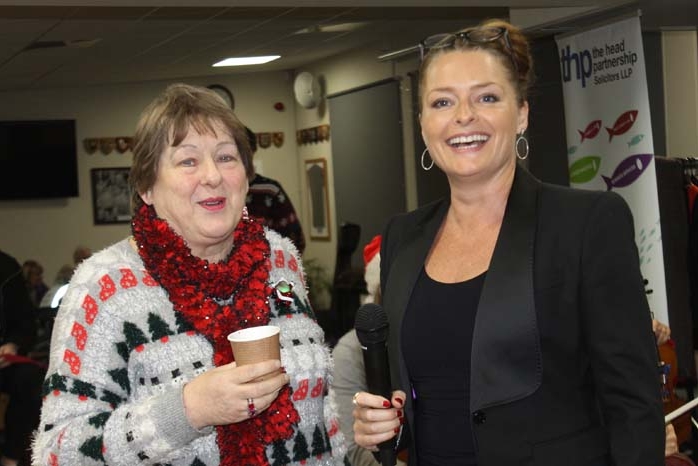 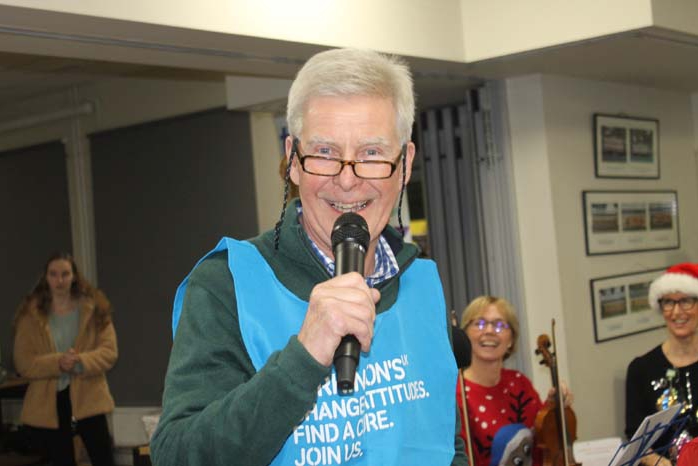 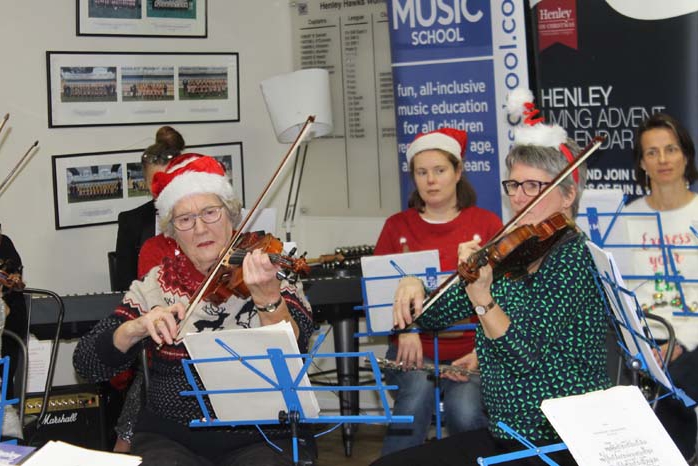 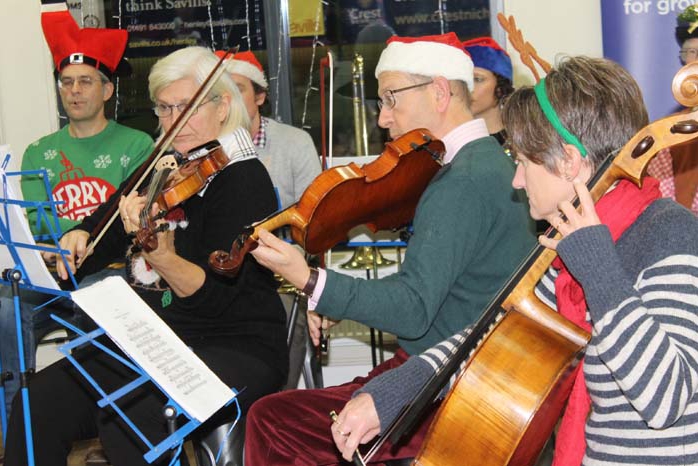 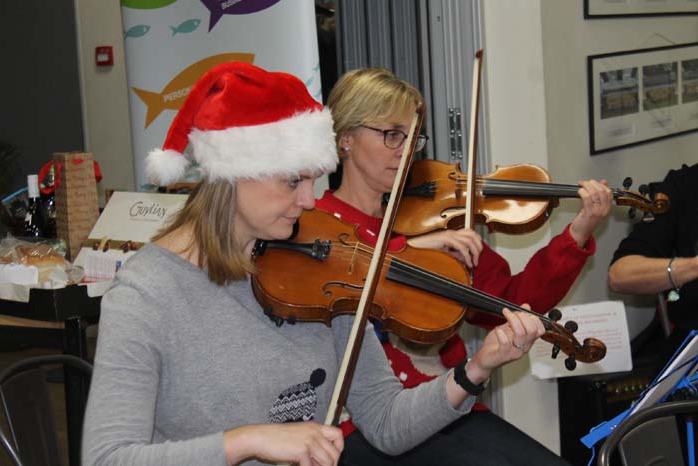 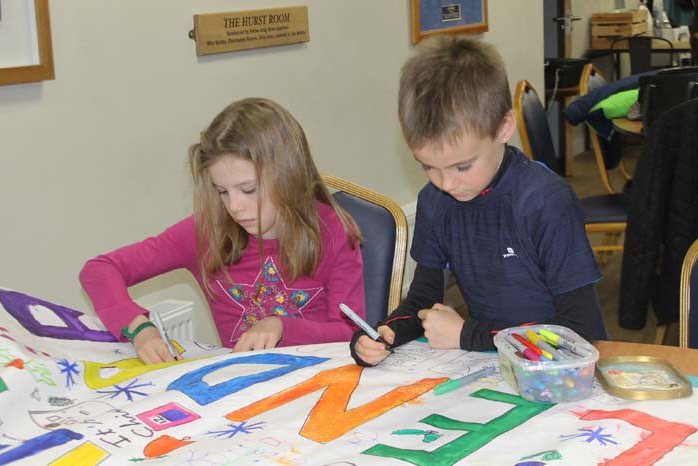 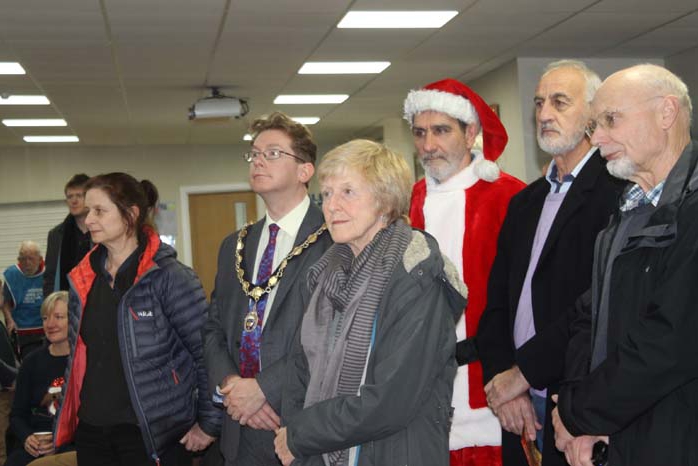 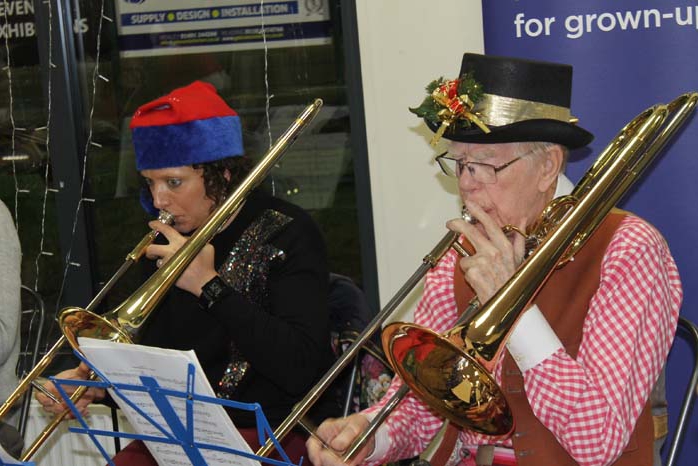 The Henley Youthful Orchestra were the surprise act for night 8 at Henley Rugby Club.  Always a highlight to see this group enjoy playing music for fun under the direction of Laura Reineke, founder of Henley Music School and probably winners of the best festive headgear of the season too.

Laura was host for the evening as Mr Christmas (Richard Rodway) was having a night off!

Their set opened with the string section playing Winter Morning and March of the Tin Soldiers by Tchaikovsky.  The whole orchestra then played Let it Snow and the theme tune from The Snowman.  Our favourite piece was Can you Feel the Love Tonight from The Lion King.  They finished the set with the beautiful Hallelujah Chorus.

The Parkinson’s UK Henley Branch was the charity for the evening.  Laura’s Dad, Terry Dudeney spoke about how the Parkinson’s affects people and the support the Henley branch provides for people suffering with the disease.

Afterwards Laura said, “The Living Advent Calendar is our most eagerly anticipated performance of the year! Youthful Orchestra is all about escapism, doing something a bit different and having fun – much the same as the living advent!  Huge thanks to the Rugby club, it was a great venue. I’m so delighted that we raised so much for a Parkinsons UK, and although we missed Mr Christmas (Richard Rodway) I had a great time compering!”