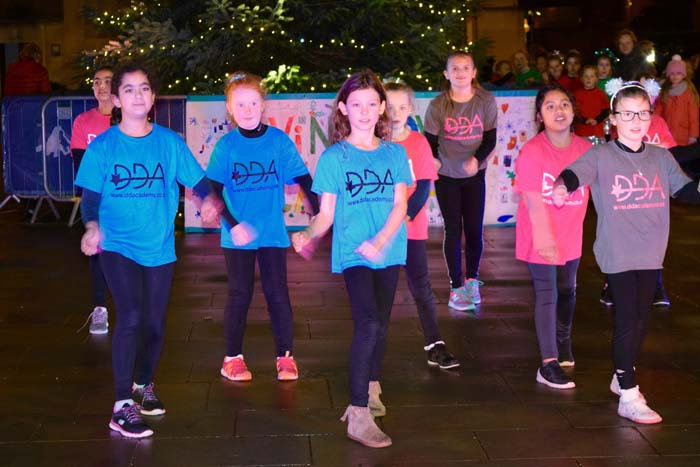 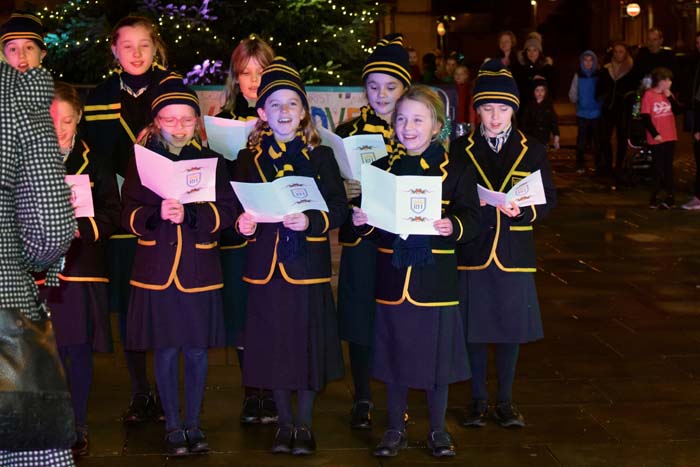 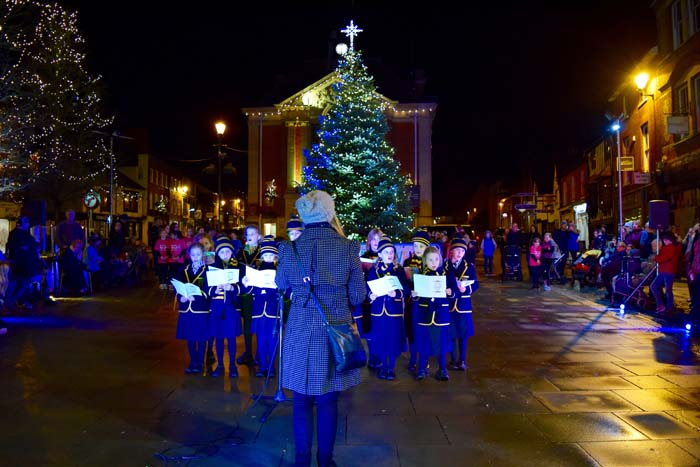 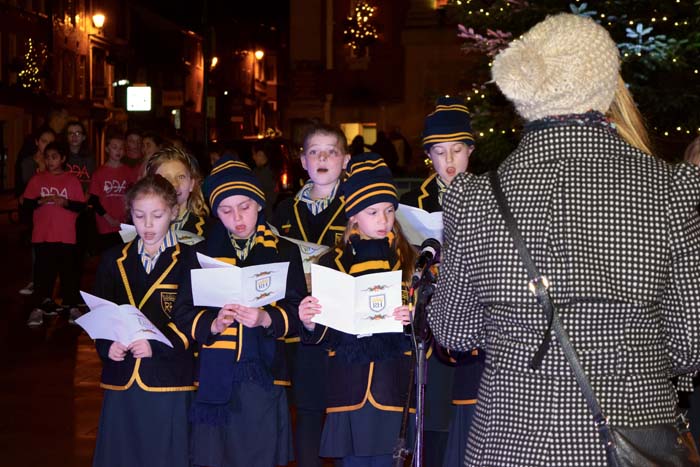 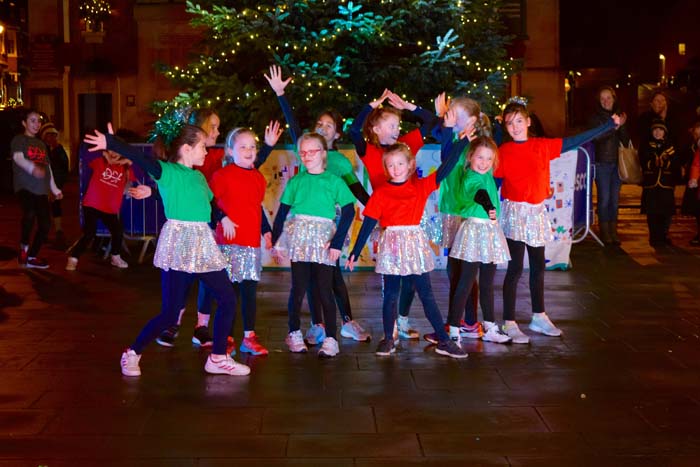 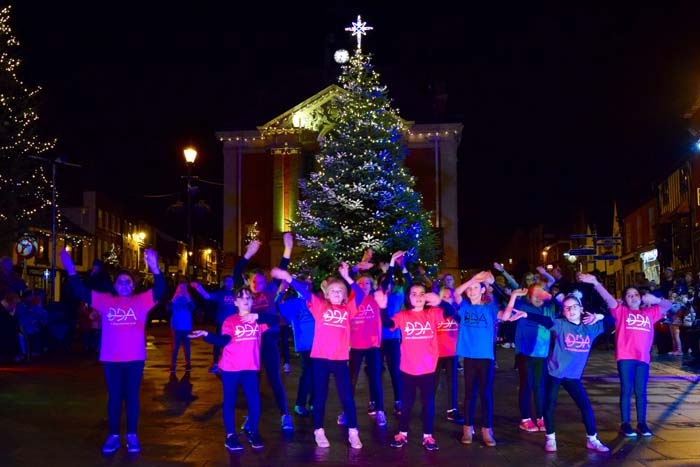 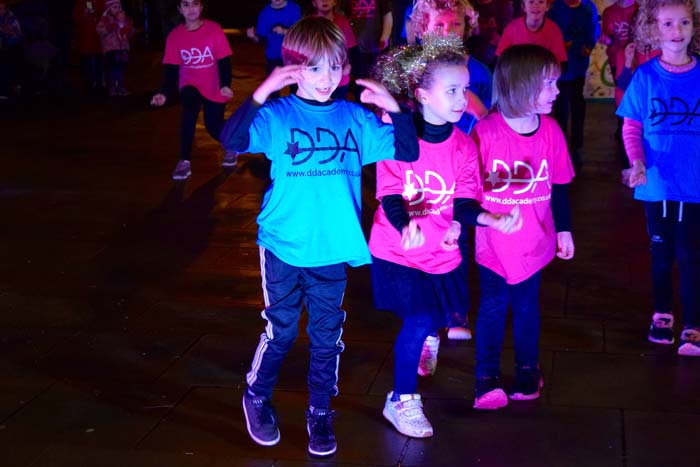 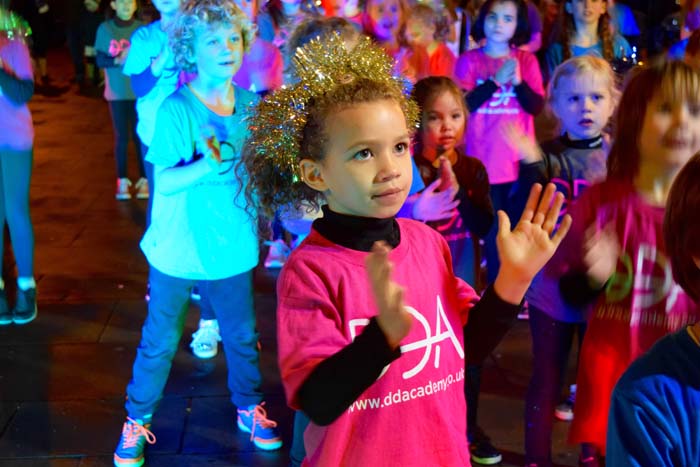 A fortunately dry 9th evening of the Living Advent Calendar featured the musical talents of Rupert House School Chamber Choir and a dancing spectacle from the Divas & Dudes Dance Academy. Falaise Square was packed with people for the children’s performance in front of the town’s Christmas tree.

14 children Rupert House School Chamber Choir opened the evening’s entertainment with their rendition of ‘Silent Night’. The singers then covered the ever-challenging ’12 Days Of Christmas’ before inviting the audience to join in with ‘We Wish You A Merry Christmas’.

Dancers of all ages from Steph Maxwell’s Divas & Dudes Academy then took to the stage for a dynamic performance of three songs. The first modern routine was to Banx & Ranx and Ella Eyre’s ‘Answerphone’, followed by some festive choreography to ‘Deck the Rooftop’ and ‘Extraordinary Merry Christmas’ by the Glee Cast. Whilst the first two numbers starred smaller groups, the grand finale saw the entire troupe of young dancers performing together, led by Academy owner, Steph.

Donations from the evening went to Headway Thames Valley. Fundraising Manager Zoe Lane explained, “We are a local brain injury charity based up on Greys Rd and we support people throughout Henley, Reading, the rest of Berkshire and South Oxfordshire to adjust to life after brain injury. We provide lots of different activities and support groups; we do things like music and art therapy at our centre up on Greys Rd.”

Day 9 of the Living Advent Calendar was supported by Henley Scan, who convert old memories – from film photographs, slides, VHS and camcorder videos – into digital form. Providing complimentary spiced cinnamon buns and non alcoholic mulled wine, the Henley Scan sponsors kept spectators warm on the dreary winter’s evening (though thankfully, it didn’t rain!) Special thanks also went to Millgate Developments for donating a number of raffle prizes, and to new Duke St jewellers, David Rodger Sharp, who gifted over £100 worth of jewellery for a special Advent Calendar auction.” 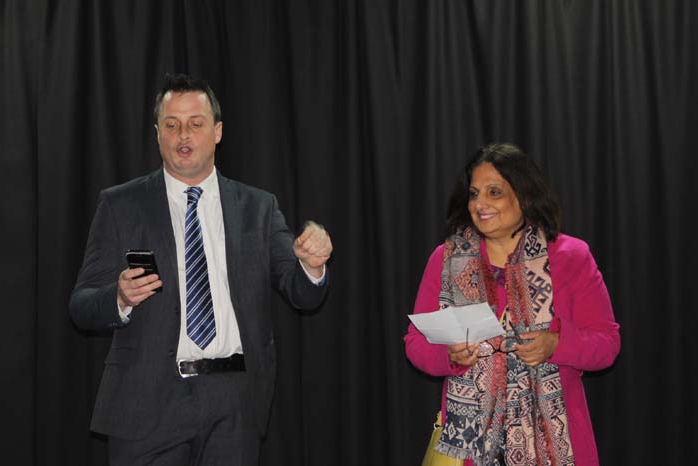 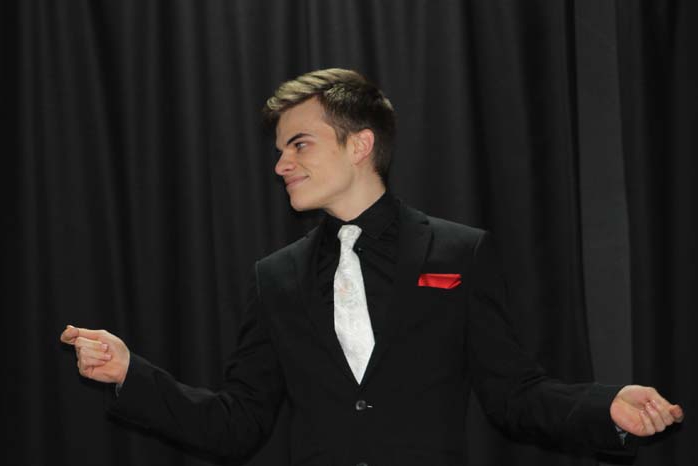 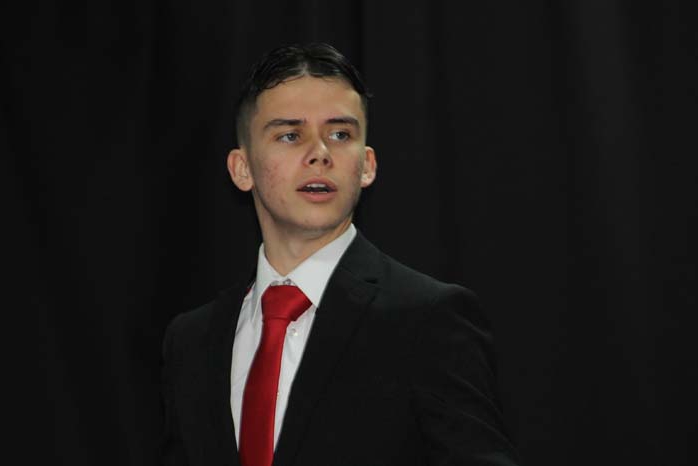 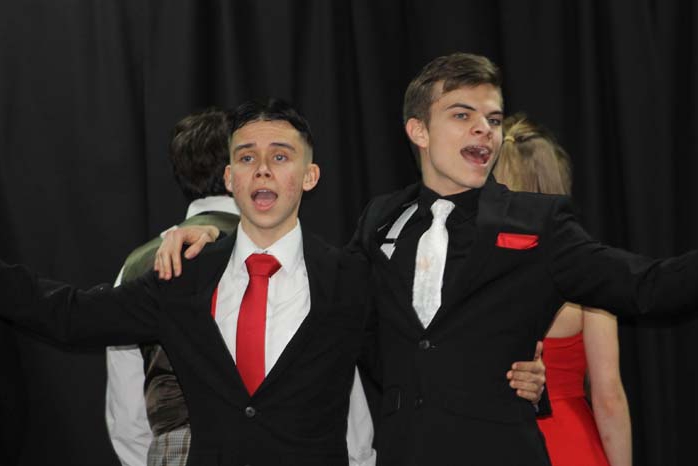 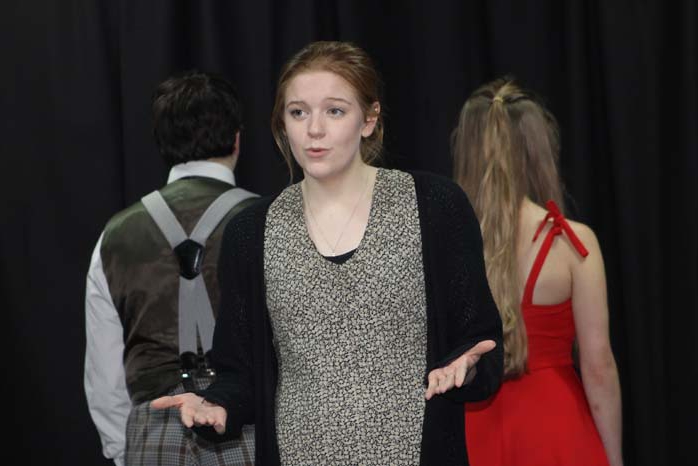 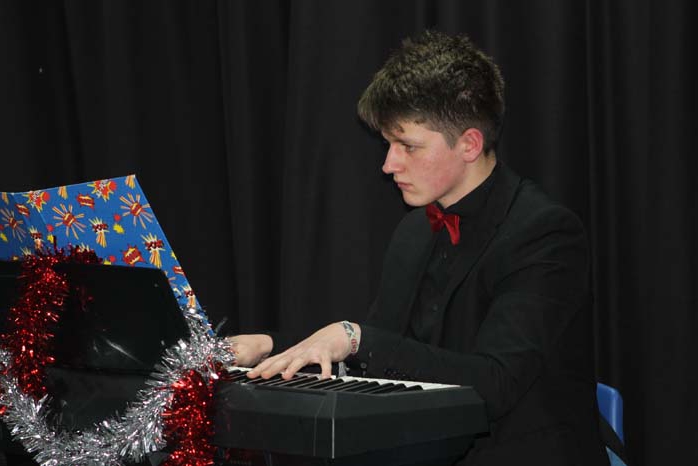 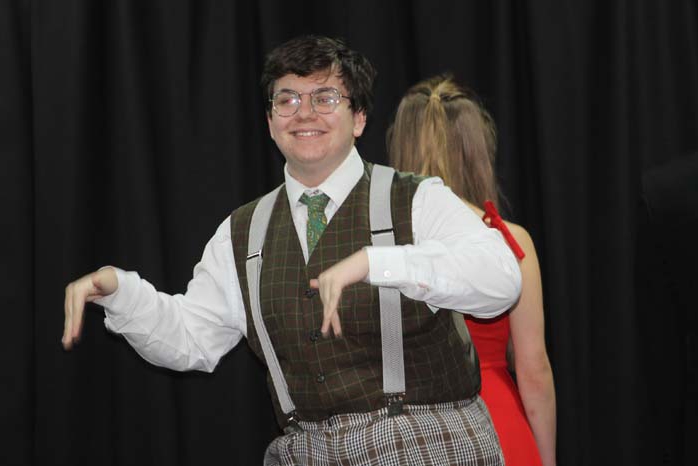 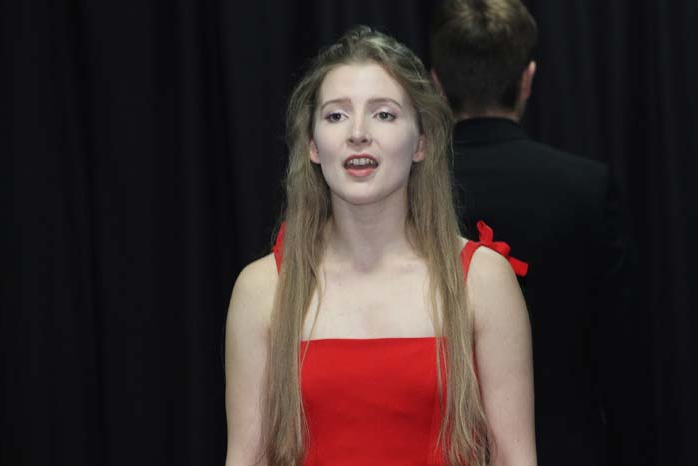 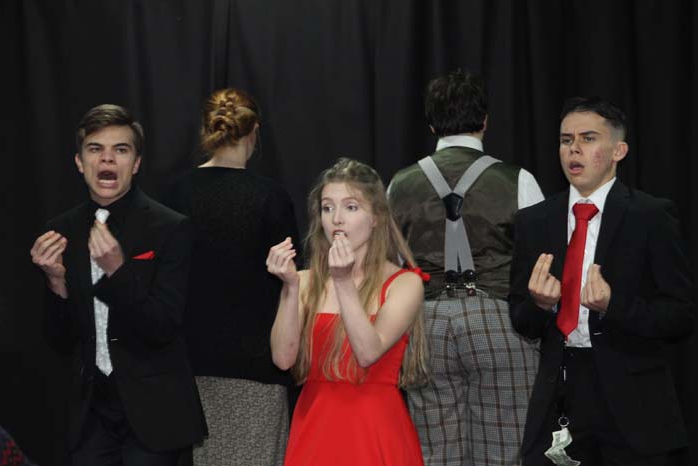 Talented stars of The Henley College’s Christmas production Cabaret, the musical were the surprise performance on day 10 the Living Advent Calendar inside the College’s drama studio.

Students Georgina Volkers, Oscar Hogg Gomez, Sam Burton-Harris, Michael Stubbs, Ellen Webb wowed the audience with their superb singing of songs from Cabaret which tells the story of an American-singer and dancer who lives in Germany in the between-wars period. She dreams of becoming rich and famous, but has a clear drinking problem and works at the seedy Kit-Kat cabaret.

Songs included Everybody Loves a Winner, It Couldn’t Please Me More, Money, Money, Money and of course Life is a Cabaret with the performers being accompanied by Henry Best on piano. The harmonies between the cast in Money, Money, Money were particularly brilliant.

Sponsors of the evening were Badgemore Park and proceeds from the raffle were going to a new Henley College charity, Brighter Futures which has been set up to support the student’s welfare and mental health. 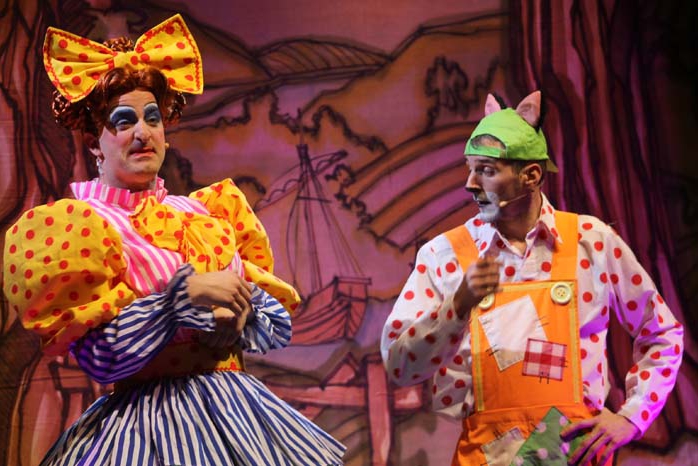 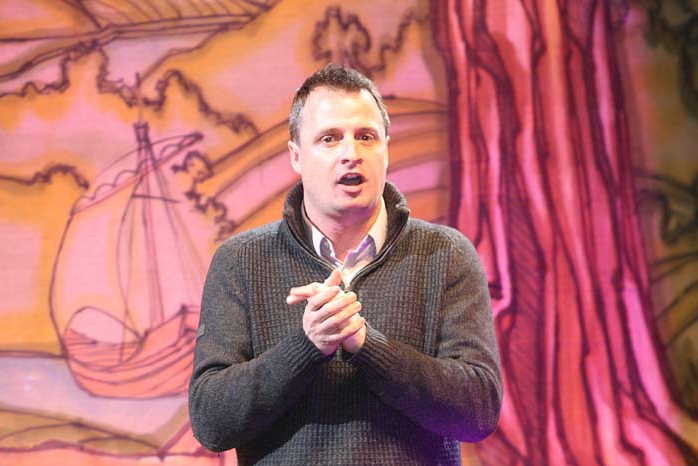 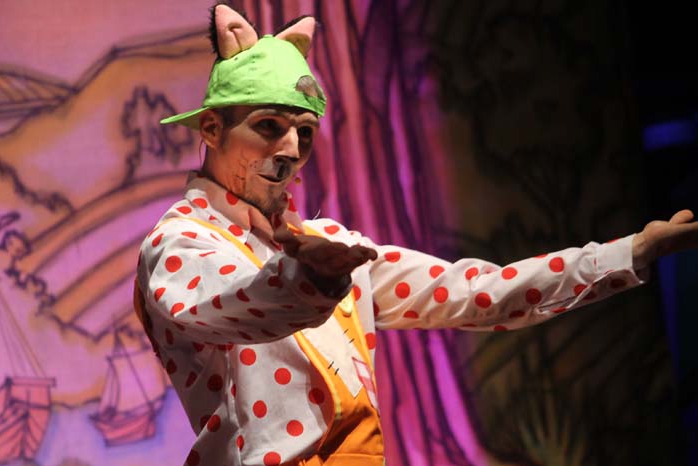 As Living Advent Calendar Mr Christmas, Richard Rodway said, “Christmas wouldn’t be Christmas without coming to the Kenton” for night 11.

The surprise act to the delight of the audience were two cast members of this year’s Kenton panto, Dick Whittington; Timmy The Top Cat and Cecily Sweet Love who gave a sneak preview of what to expect from the show which opens on 15 December.

Timmy started off with some great ‘bad’ panto jokes about the jobs he’s done, ending with “I started an origami business which soon folded!  Cecily Sweet Love told the audience he was looking for a new husband and Richard in the front row of the audience got picked.  The duo then organised a competition between the two sides of the audience to sing Jingle Bells the loudest with Timmy announcing afterwards it was a draw.  He ended by saying, “You’ve been a brilliant – we’ve been the best we could afford!”

Sponsor for the evening were Kench & Co who provided a bottle of Moet Champagne as a raffle prize.  Other prizes included a £60 Copas turkey voucher, a three-course dinner at Hurley House Hotel and tickets to Henley Festival. 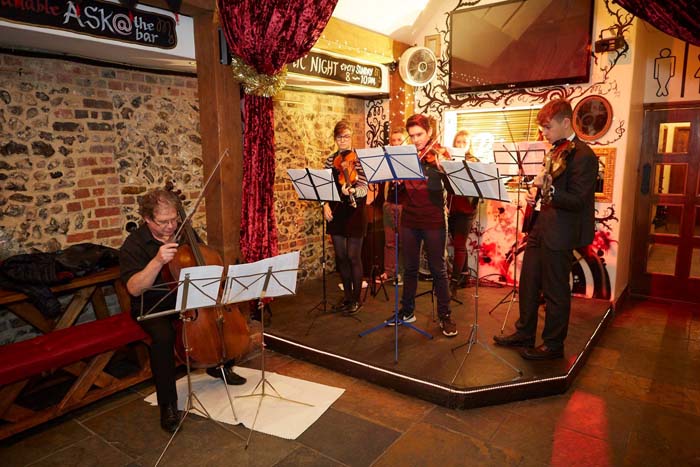 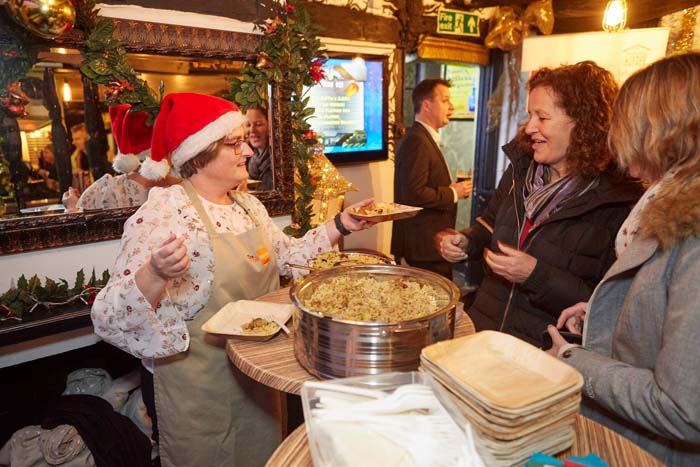 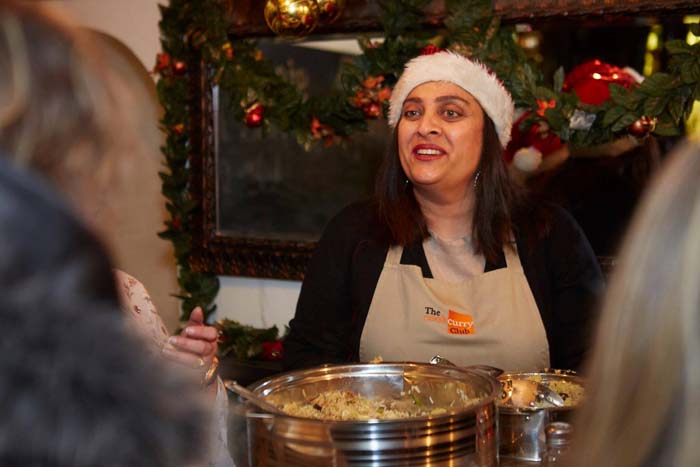 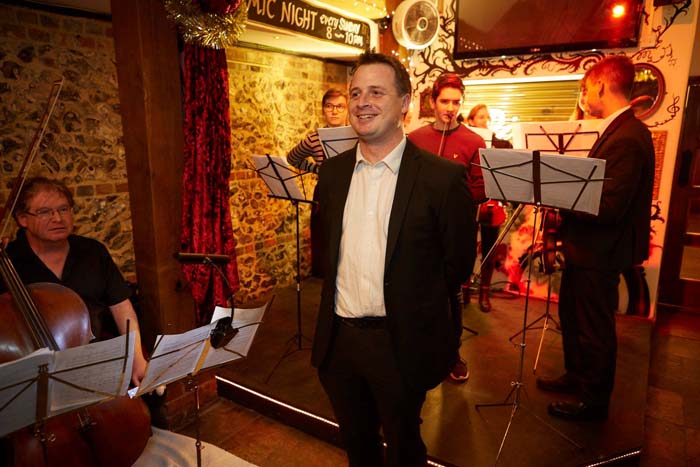 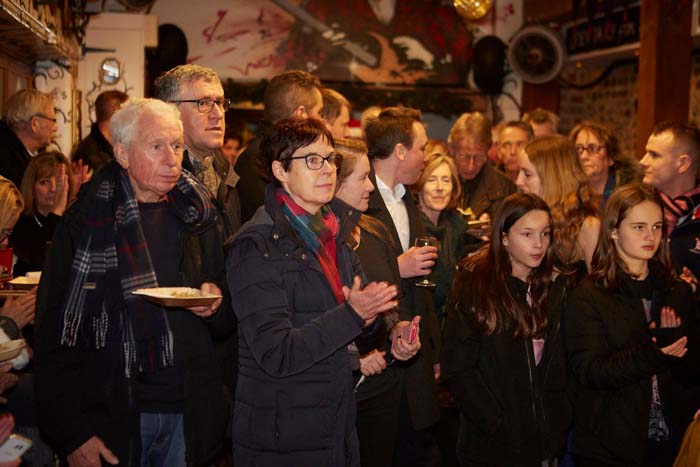 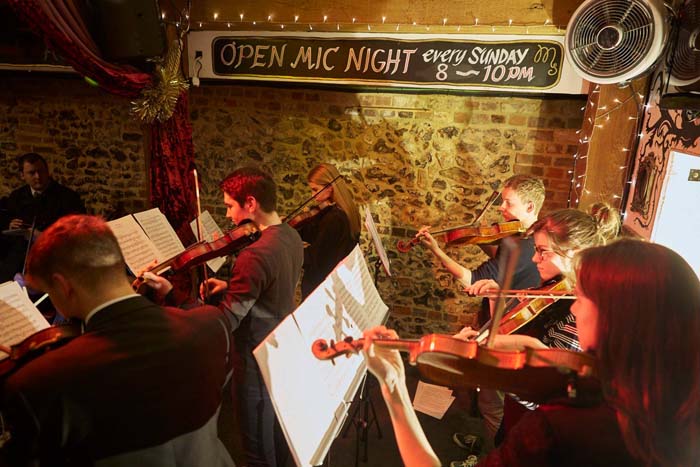 The Living Advent Calendar on night 12 was inside again.  This time at Magoos in Hart Street with the special performers being the string section from the Henley Youth Chamber Orchestra.

The audience were treated to a delicious curry by The Cook Curry Club and the charity for the evening was The Chiltern Centre for Disabled Children.

Afterwards Councillor David Eggleton wowed the audience with a magic card trick. Richard Rodway said afterwards, “Is there no end to this guy’s talents”