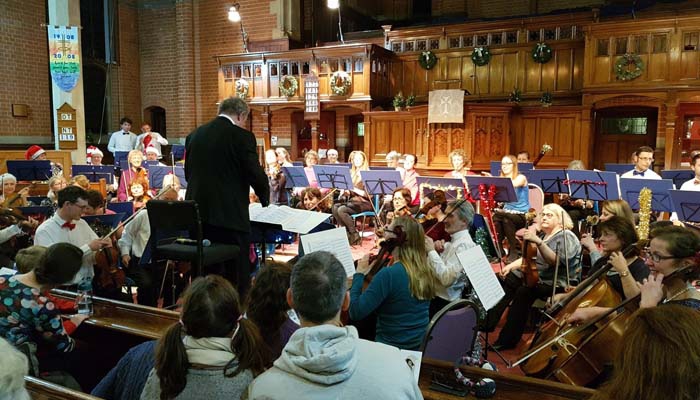 Henley Symphony Orchestra’s Christmas concert is an established part of Henley’s festive season. On Sunday, the orchestra performed an imaginative programme with some well-known pieces and audience carols, a popular mix, at Christ Church. It was a sparkling event with a smattering of tinsel and plenty of Hungarian spice. Four of Brahms’ Hungarian Dances and six of Delibes’ dances from the Coppelia Suite were spliced through the concert along with carols. The grand finale was the exciting Polovtsian Dance by Borodin. This unusual presentation devised by the talented musical director, Ian Brown was well received by the large audience.

Brahms’ 5th Hungarian Dance, played with verve and good control, opened the programme. This was followed by Hungarian Dance number 2 in D minor which provided a contrast in pace and feeling which the orchestra captured.

Four of Delibes’ dances from the Coppelia Suite sandwiched the first audience carol, Once in Royal David’s City, with the first verse beautifully sung by Jack Dag.

Two more Brahm’s Hungarian Dances 3 and 1 followed: number 3 allowed the orchestra to show-case the classical nature of Brahms’ compositions, keeping it light, peaceful and rather refined in contrast to number 1 which the conductor referred to as a real ‘barn-stormer’.  It certainly was. Lovely waves of strings rolling along with a solo piccolo and flutes chirping away, then whoosh, the orchestra was off, delighting in the fun of the dance yet clearly under the control of the conductor’s masterful baton. Another audience carol then the final dances by Delibes’, Notturno and Czardas. The very melodic Polovtsian Dance from Prince Igor by Borodin was the final advertised item. In this piece we hear the strong Hungarian influence yet the music is confidently Russian, not surprising as Borodin was a significant Russian chemist whose research was admired. In this fine piece, the strings, wind and brass played a series of cascading descents, there was lots of percussion all of which led to the lovely melody, later used in the 1953 musical Kismet and a popular song, Stranger in Paradise.

The conductor gave illuminating and entertaining introductions throughout and engendered an appropriate light festive mood. With such a cornucopia of great music, the three audience carols seemed slightly intrusive, although sung with some anarchic enthusiasm. The encore was the promised Sleigh Ride by Anderson, taken at a cracking pace, complete with bells, whip cracks, clopping hooves, the neighing of the horses and the whole orchestra rollicking along to the final enthusiastic well deserved applause.  A great finale for a very joyous concert.