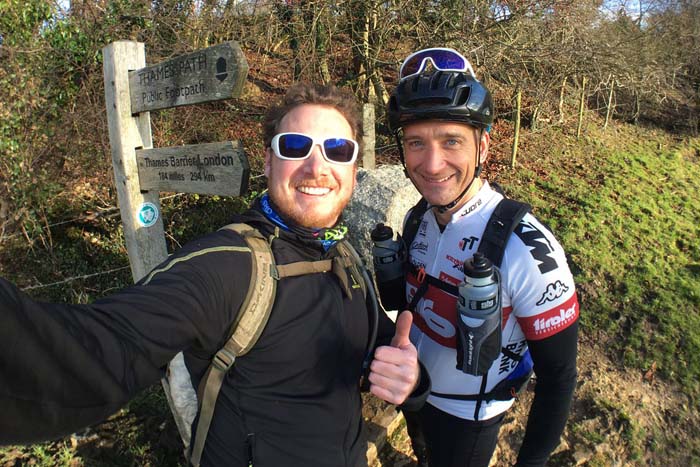 Good friends Ben Hargreaves and Graham Bell decided to give themselves an extra challenge to get ready for Christmas this year by doing a triathlon from the source of the Thames near Kemble in Cirencester home to Henley (100 miles) as part of the Walking Home for Christmas national initiative to raise money for Walking for the Wounded and Help for Heroes charities.

Four years ago Ben and Graham were joined by Gary Connery when they ran from Hammersmith along the Thames back to Henley. A total of 58 miles in just under 13 hours and raised £2000 for the charities.

It was Ben’s idea to do another challenge and it was Graham’s idea to do the triathlon and the route in a 24 hour time window and the name #NoonTilNoon. The challenge started on Thursday 20 December on bikes in high winds and rain from the source to Goring on Thames via Lechlade, Bampton and Abingdon, using a mixture of roads, bridleways and cycle paths.

After dinner in Oxford and a few hours sleep in the car, Ben and Graham swapped their cycling gear for running gear for a half marathon following the Thames Path from Goring to Reading where they had left their canoe.

When Graham did the calculations before the challenge in order to make it possible in the 24 hour period, he worked out that majority would need to be done on bikes.  Graham explained, “We needed to be flexible with the route though because some sections of the Thames path are not suitable for bikes, and as we found out some sections that were designed for bike use were flooded.  Getting our feet soaked in the first hour was not part of the plan, and neither was the heavy rain that greeted us in the second hour.  We knew that most of the challenge would be at night, so had some really powerful mountain bike lights.”

With just 2 hours to do the 10 mile canoe, they made it back to Henley arriving on Friday morning at 11.58!  Having canoed through Sonning Lock, St Patrick’s Stream, Hennerton backwater.  Graham commented, “The best bits were the section near Somerford Keynes where the Thames is just a stream of beautifully clear aqua marine coloured water, the part after Lechlade is really interesting too, the river meanders past WW2 machine gun pillboxes every few hundred yards, and paddling St Patrick’s stream with a strong current.  Ben added, “The canoe section was the easiest part (compared to the rest of it) as the river was fast flowing and helped us make up for the time we lost on other sections. The toughest bit like any activity was being cold, wet and hungry, but this is all part of the challenge. Neither of us were 100% we would complete the challenge, but glad we did, remembering it’s only a challenge if it’s difficult.”

Graham who is very used to tough challenges having completed the Marathon des Sables said, “The toughest parts for me were: the rain at the start because I knew that if we got cold it would seriously sap our energy levels, getting going on the second morning on legs that did not want to move, and the blow-up mattress going down in the middle of the night!”

If you would like to donate go to https://www.walkinghomeforchristmas.com/teams/noontilnoon-2 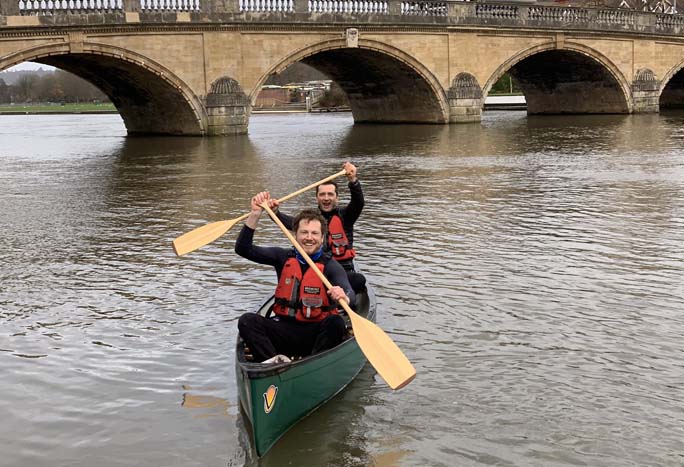