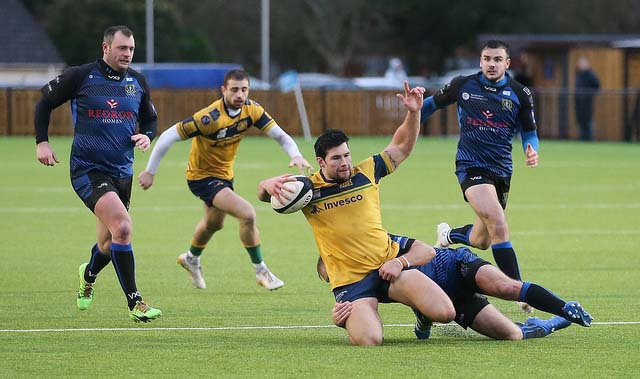 Henley continued their push for a top two position with a hard fought victory over a determined Dings side at their new stadium complex in Bristol. Henley started brightly enough with ample possession and pressurising the hosts defence with some penetrating rugby. However, possession was easily lost through a host of penalties that eventually saw Tom Hall yellow carded for a high tackle. Most of these were penalties conceded in possession and this enabled Dings to relieve their lines. In the end, a penalty on the visitors 10 meter line was converted by the hosts to take a lead after 15 minutes.

Much of the game was being played in the midfield area of the pitch, and as a consequence, scoring opportunities were at a premium. Roddy Giles did take a rare opportunity to level the scores after thirty minutes with a well struck penalty of his own. However Henley once again built a strong position with an attacking lineout only for an infringement to be spotted once they were set for a driving maul.

Much of the rest of the game was dominated by the conditions with driving rain and a strong wind all playing the part in a scrappy encounter. Unfortunately, Giles just pulled his penalty attempt wide on the stroke of half time.

The second half continued much as the first, but Giles added a second penalty just after the break to gain the upper hand. An injury to Marcus Lowe introduced Ross Parkins into the second row and Henley continued to dominate the collision area. However, when it looked like Henley would now push on and take the game to the hosts, the never say die attitude of Dings saw them take the lead. Some direct running and a good line by their flanker, Tom Anderson saw him go over close to the posts with the conversion a formality.

It now needed all of Henley’s experience and guile to ensure that they would come away victorious. This they did in a professional and ruthless way as they laid seige to the Dings line. Eventually, after several penalties and scrums later, the ball was eventually moved to Marcus Lowe, who had now returned from injury, to dot the ball down over the line, Greg Goodfellow’s conversion ensured a three point lead was maintained. The remaining ten minutes saw Henley once again in the ascendancy and another golden opportunity from a driving maul was once again penalised for obstruction. However, Dings were unable to break through a tight defence and the rest of the game fizzled out inside the hosts half.

Next up for the Hawks is a huge home game against 2nd place Taunton Titans at Dry Leas this Saturday, kick-off 2.30pm.