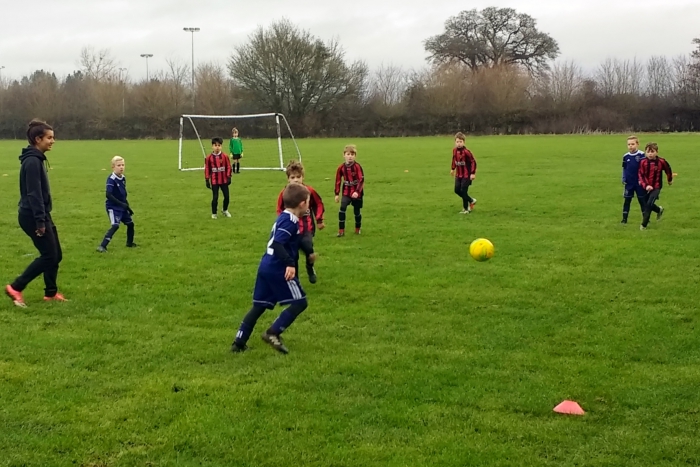 On an early overcast morning with a cold and biting wind, the Hurricanes travelled to Sonning to face the U9 Blacks, the top team from Berks Elite FC academy. This could prove to be the most challenging meeting of their campaign so far, as the step up from last year had yet to see them win a game.

The Henley side, playing in red and black took the kick off and made a confident start with Freddy Estornel pushing hard down the right side of the pitch. But the home team didn’t make it easy and despite conceding a number of early throw ins the Berks Blacks eventually won the ball.

Both teams were passing well between their respective players and moving fast up and down the pitch. Several quality shots on goal came from striker Charlie Myers, but he couldn’t quite manage to find a way through the tight Berks defence. When the home team made a break into the Henley end, Theo Decardi-Nelson was quickly on hand back to his line to defend the threat, working well with Archie Butlin, they kept the Hurricanes goal area safe. Lorenzo Nicoletti-Dowd was also in the mix, frequently pushing the ball back into the Berks half.

Despite their best efforts, the score remained goalless at the end of the quarter.

With the match well under way and the players finding their rhythm, a cold drizzle began to fall, however the boys continued to put their all into the game as shots came at both ends. Charlie Cooper quickly reacted to make a heroic clearance off the goal line after a flurry of attempts from the Berks side. Following one of many superb runs from Corben Galloway, a pass to Harry Biggs, then on to Charlie Myers saw another shot troubling the keeper. This was pushed back out where Harry took the opportunity to fire on goal, but again the Berks keeper managed to block the shot.

The unrelenting pressure soon paid off, when Harry played a lovely through ball to Corben who dribbled past several opposition players, chipping it on Charlie Myers who finished with a slice towards the keeper and over the line to give Henley the lead.

Looking to try and draw level, Berks quickly mounted an attack on the Hurricanes from the re-start, but some great work from Rupert Arsyad won the ball back for the visitors and kept them on top.

Another lightning break from Corben saw the ball taken from the Henley area all the way down the left side and crossed into the box for striker Charlie Myers to fire on goal. This was well saved by the keeper, but Charlie Cooper was perfectly positioned for a beautiful follow up shot, blasting the ball decisively into the net for the Hurricanes.

As before, Berks quickly re-started the game from the spot making a concerted effort to take advantage, however keeper George Beesley showed his quality by comfortably collecting the attempt on goal and promptly delivering the ball back to a highly capable Archie.

The rest of the quarter was seen out by a confident Henley side who were beginning to look increasingly in control.

With a half time break and a change of ends, the Berkshire side seemed to restart the game with an adjustment to their tactics. Making longer passes and finding space, they stretched the legs of the Henley players, but the Hurricanes determination seemed to break this tactic as Lorenzo and Rupert made some critical interceptions to help win possession back for the visitors.

Berks were now beginning to look a little frustrated which resulted in several heavy tackles, but this didn’t stop the positive play from the Hurricanes as Theo and Charlie Myers produced successive shots on goal. Theo continued his assertive play with some more good defence in midfield, blocking the home team from making a break.

The Henley team were now playing some super football as Freddy made a good run down right wing. The ball was pushed out for a throw in, but it was quickly guided to Theo with a header on to Corben and then fed through to the Berks area, where Freddy chipped a shot on goal. This was reached by the keeper, but found its way over the line where a defender frantically scrambled to clear it but too late, some confusion followed, but the goal was deservedly given.

With another quick restart from the home team, Archie stepped up with some more good defence, passing back up to Charlie Myers with a good run to the opposition end, keeping the advantage until the whistle blew.

With a fairly comfortable lead, the hurricanes now looked to be enjoying the game, Rupert made a lovely turn in midfield, passing though to Charlie Myers, but again he was taken down for another free kick. Both teams were still playing hard, but certainly beginning to tire.

Harry fired a solid shot on goal, but it was pushed out for a corner to the Hurricanes. This was taken quickly by Harry to Corben, then passed on to Charlie Myers in the box. The ball was knocked back out to Rupert who powered a super shot towards goal striking the cross bar and deflecting down towards the line. Somehow the keeper managed to collect it, but could have easily been another goal.

In what was a lovely last move of the match, a cross in from Corben on left side found the head of Charlie Cooper who directed it skilfully towards goal, but the ball sailed narrowly over the bar just as the whistle blew.

The match was a rough, tough challenge, but the Hurricanes displayed a fantastic level of ability to outplay their opponents both mentally and physically. Yet again it was a pleasure to watch them in action.