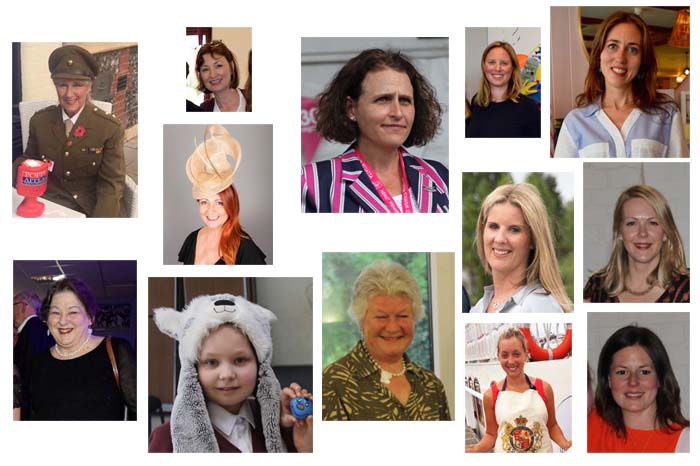 Sue Ryder is delighted to announce the nominees for their 2019 Southern Women of Achievement Awards, sponsored by Invesco. Inspired by the charity’s own incredible founder, the awards celebrate women who have achieved amazing success and stand out as a role model.

Nominations were accepted from Berkshire, Buckinghamshire and Oxfordshire. The judging panel will meet this month to decide the finalists and winners in each of the categories, who will be announced at a glittering evening awards ceremony on Friday 15 March at the Royal Berkshire Conference Centre.

Fern Haynes, Interim Head of Fundraising, said: “It has been overwhelming to see the truly remarkable stories and achievements of those who have been put forward. At this stage I would like to commend all these women as every single one most definitely deserves recognition.”

“The awards ceremony will be such an inspiring event and also helps to raise vital funds for Sue Ryder. Whether you know someone who’s been nominated or you’d simply like to celebrate incredible women, we’d love for you to join us. Tickets include bubbly on arrival at our glamorous black tie event, as well as a three-course dinner with drinks and entertainment.”

Matthew Heath, Chief Marketing Office EMEA at Invesco, said “Invesco is very proud of its long term support for Sue Ryder and the Women of Achievement Awards. These awards are a wonderful way of celebrating the contributions made by so many inspiring women, while also recognising the important work and vital care Sue Ryder provides within our local community. We wish all nominees the very best of luck!”

The nominees for Henley are…

Charlotte Cavanagh – founder of vintage-themed catering company Time for Tea in 2014.  Charlotte has won Thames Valley Venus Awards for Customer Service and Entrepreneur of the Year in 2017. Time for Tea provides vintage china hire, afternoon teas and buffets for all kinds of events including pop up ‘tea rooms’ which have catered for many events throughout the summer such as the Traditional Boat Rally, Henley Show, Fawley Steam Rally and Salvo Fair.

Suzy Hobbs – co-founder of Mr Hobbs Gin which was launched in May 2017. The gin is named after Mr Harry Hobbs founder of Hobbs and Son in 1870 and publican of The Ship Hotel who was often seen in his punt enjoying his home-distilled gin. The secret recipe was discovered on the back of an old framed photograph of himself, along with step by step instructions to make it.

Liz Felix – Liz makes and sells hats from her shop on the Reading Road, Henley which she opened in 2014.  Her customers include Prime Minister, Theresa May who has worn Liz’s hats for official state visits and special ceremonies and occasions.

Vanessa Bird  – Vanessa has been the Manager at the Christ Church Centre on Reading Road for seven years.  She launched the Memory Cafe this year after the Bluebells Community Club closed.

Connie Butt – former Over 60s Club Manager.  Connie has raised over £40,000 for the Royal British Legion over the last 20+years.  She organises a special dinner dance each year plus helps with street collections.

Carolyn Molyneux – founder volunteer of the Regatta for Disabled and Henley Living Advent Calendar.  Organises the shop window competition in July for Regatta and December for Christmas.  She combines her volunteering with working at her company Delegate Office and Conference services which she founded over 30 years ago.

Rosemary Duckett – Chair of Henley YMCA Trustees since 2009.  Was influential in the purchasing of the accommodation buildings lease from YMCA England in Lawson Road in 2017.

Woman of Achievement in Sport

Henley Rowing Club’s Junior Women’s Squad
Five Henley girls were selected to Great Britain at the World Rowing Junior Championships in Racice in August 2018. Georgina Robinson Ranger and Lottie Orr competed in the quad, Mary Wright and Daisy Butterworth in the coxless four and Issy Jonsson the pair. At The British Rowing Junior Championships Henley Rowing Club won the Victor Ludorum for most successful club at the event for the third year in succession.

Caitlin Donaldson
Caitlin, aged 11 was diagnosed with Acute Lymphoblastic Leukaemia last year. She’s a pupil at Badgemore Primary School.  Her love of art and craft gave her the idea of rock painting in between her chemotherapy treatments and then hiding the rocks.  Her Mum set up a Facebook group for people to take pictures where the rocks have travelled to which have included as far away as Australia, New Zealand, Canada and Mexico.  In May last year, Ben Fogle and Olympic gold medallist Victoria Pendleton also took one of Caitlin’s rock to the base camp of Mount Everest.

Aspen Weatherburn – Former journalist and owner of Naughty Mutt Nice dog grooming shop in Henley.  She sold the shop on the Reading Road in 2017 and started a social media business Hello Henley.

Sian Esther – Launched her new nightwear clothing brand in June 2018.  For every item sold, the company donates to three charities, helping women of all backgrounds to have a safe night’s sleep and fulfil their dreams. Sian was inspired to start the clothing line after the traumatic loss of both of her parents. With grief significantly affecting her sleep, Sian realised the relief that having a good bed, cozy clothes and a strong support network can bring.

Mentor/Coach of the Year

Sarah Gilbert – co-founder of The Creative Duck, a creative community group launched in 2016 to build and bring together the creators and the small business owners in and around Henley-on-Thames with regular evening talks and networking events.

Caroline Sweetman – founder of Springbox Gymnastics Club in Henley 30 years ago helping hundreds of youngsters get into the sport.

Miriam Luke – Miriam was appointed Chair of Henley Women’s Regatta in 2012 and has transformed it into a truly international and inclusive regatta. She increased the volunteer and leadership team and led three through an extraordinary level of change, often starting from scratch.  She is also now a Steward of Henley Royal Regatta, another volunteer role – one of only five women to be one.