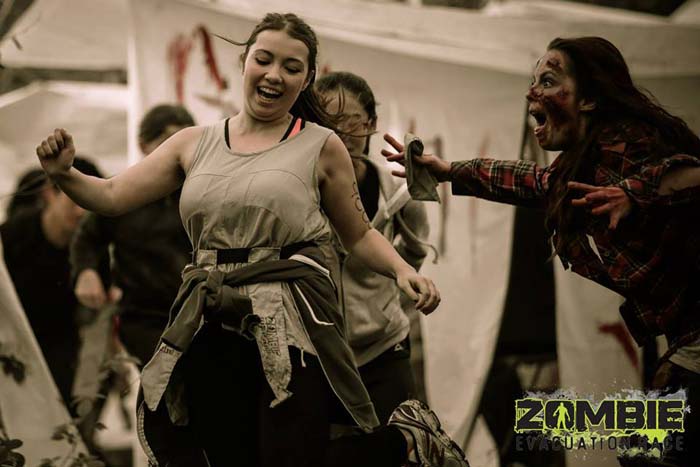 Zombie Evacuation Race was founded in the UK in 2012 and since then has has had thousands of competitors take part with races all over the UK.

Now booming in popularity, Zombie races are proving a huge hit with keep-fit fans who have already run 5k and 10k races and now seek a fresh – terrifying – challenge.
Instead of attempting a half or full marathon, racers are flocking to sign up for the thrill of being chased by crazed, flesh-eating Zombies, foaming at the mouth and oozing fake blood.

On arrival at race Culden Faw, a (spoof) Sergeant Major from the fictional crack British Army group RAZOR (that’s the Royal Armoured Zombie Outbreak Response unit) informs all racers that the country is in a state of lockdown due to a spreading deadly Zombie virus.

Racers are told they will have to be extracted from an evacuation point five kilometres away. They have to tackle obstacles along the way and reach safety without losing the three fluorescent, Velcro “tags” on their running belt. If a Zombie catches you and pulls one off, you lose a life and risk a mauling by The Undead.

Racers can enrol on www.zombieevacuation.com to either take part as “an evacuee” (ie a runner), or as a Zombie (a chaser). Obstacles along the 5km or 10km course are kept top secret in advance in order to make runners as anxious as possible, but racers may encounter dark abandoned buildings, belching smoke and ‘corpses’ in a Zombie hospital along the way. There may also be “minefields” to get through (mines laid to catch Zombies) and Zombies often camouflage themselves, hiding in bushes then leaping out unexpectedly to ambush racers.

Aaron Murrell, Race Director of the Zombie Evacuation Race series, said today: “Our race motto is ‘Only the fittest will survive!’ and Zombie Evacuation Races are not for the faint-hearted. The thrill of dressing up as a Zombie in full make-up, or else being chased, makes some people scream with excitement. Everyone should beware, the Zombie plague is spreading fast.”