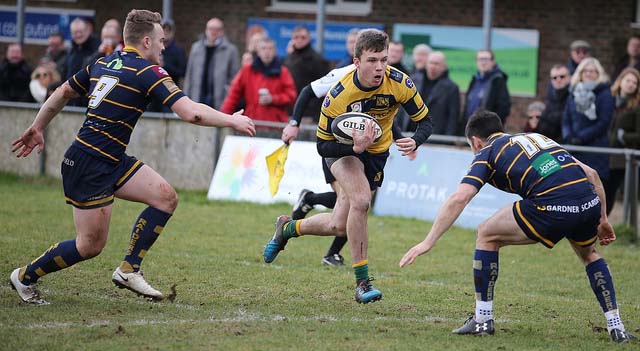 Games between Worthing and Henley are usually tight high scoring affairs, but this Saturday was different. Henley dominated much of this game apart from the final 10 minutes when Worthing were chasing a try bonus point. Henley, with a week off after last weekend’s snow, were determined to get straight into their stride, and after a series of driving plays, the ever-effective Tom Hall buried his way over after only three minutes. Ben Bolster cleverly converted as the ball fell over on his run up. Indeed, this was the first of his six conversions which capped a fine performance with the boot, some of which were from the touchline into a stiff breeze.

It was not long before George Griffiths scored the first of his hat-trick of tries as the ball was worked well through the hands for the winger to score wide out, again Ben Bolster added the extras. A solid Hawks defensive line was causing major problems for a lively Worthing backline and this forced a number of turnovers as Worthing struggled with the pressure. The game was all being played in the Worthing half and clearly it would not be long before the visitors improved their score. This came as the result of a training ground move. Once again Hall hit a good line from the back of a line which eventually saw Tom Emery pin his ears back and storm in from 10 metres. At this stage Henley should have secured the bonus point before half time but a couple of errors allowed Worthing to score wide out with an excellent conversion Henley went in at the break 21 – 7 ahead.

This lapse of concentration just before the break had coincided with a yellow card for skipper, Sam Lunnon and it was essential that Henley put this setback behind them. This they did as Griffiths once again got on the score-sheet a minute after the break. Constant pressure eventually tied in the hosts defence and the ball was moved wide where the Henley winger was waiting. Dave Manning was on hand to added another try some ten minutes later and it looked like Henley were going to rack up a cricket score but only one further score for Griffiths was forthcoming and the last score came once again from George Griffiths on 58 minutes. The last quarter was a scrappy affair with Worthing desperate for a valuable bonus point and they produced two tries in the last ten minutes as the game fizzled out.

This was a comprehensive victory but the visitors knew that some additional scores had been left out on the pitch. However, they will be pleased with their bonus point victory on the road as they face the challenge of the coming weeks.