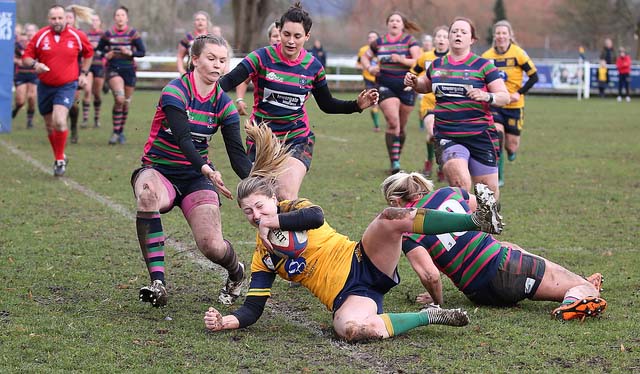 The nerves were certainly high during the warm up as the Hawks were preparing for the biggest game of the season, and the crowd of over 200 began to arrive for the local derby clash against Abbey Nuns. The winner would secure their Championship status.

The first 10 minutes were full of uncharacteristic errors from the Hawks. This allowed Abbey to advance into the Hawks 22 and have their first attack of the game. The Hawks defended their line and managed to turnover the ball only for a clearance kick infield to be scooped up by the Abbey fullback and with support the ball was passed through the hands and The Nuns took the first try of the game. 0-5.

This seemed to wake Henley up as they hit back straight away. The forwards were making hard yards and giving good platform for Davidson to play with tempo. Simple hands down the line of backs and a perfectly timed passed from Copley allowed Moody to touch down in the corner. 5-5.

The rest of the half was Henley’s, with all the possession they were making inroads and flooding the Abbey defence. The backs were swinging the ball from one side of the pitch to the other but couldn’t find a gap through. The forwards started carrying hard, lead by captain Wysocki-Jones, Henderson and Collins. But it was Matthews who barged her way over the line for the Hawks second try. Edwards successful with the conversion. 12-5.

Abbey Nuns came backing fighting after the half time and Henley found themselves valiantly defending their own line. The determination from both teams was high and after a period of play in the Hawks 22, Abbey were dominating Henley in the scrum. Barrett was pinged for collapsing the scrum and the ref had no choice but to awarded the penalty try and show a yellow. 12-12.

Down to 14 women this seemed to wake Henley up again as they were then prevailing with the possession and territory.  Moody and Baker has been accelerating around the outside of the defence all day but on this occasion Moody was caught high by the Abbey fullback which saw them down to 14 for the rest of the match.

The Hawks found themselves within meters of the Abbey try line as the forwards were hammering with close carries. Abbey defence was robust around the breakdown and the home side could not find a way through. Davidson played the ball out wide to Edwards who swung the play back against the drifting defence to fly over the try line to secure the win for the Hawks. She absolutely nailed the kick from out wide to convert her own try. 19-12 to the Hawks and safe from relegation.

With other results going their way the Hawks finished 5th and leave Abbey unfortunately waiting another long agonising week to determine their fate in the Championship.

The hawks look forward now to the Cup and hopefully continue building on the recent performances.