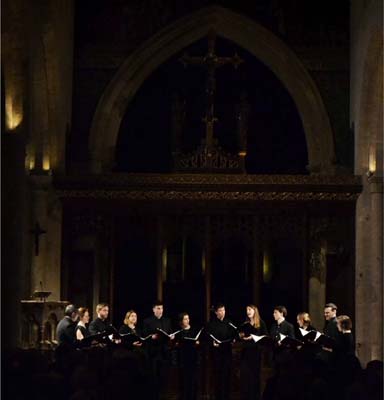 Had you been passing St Mary’s Church in Henley on Friday evening and heard voices, you may have thought were angel voices. It was Stile Antico performing as part of the Chiltern Arts Festival, presenting an evening of enchanting, early English music.  Stile Antico, an exceptionally talented and innovative ensemble of young, pure voices, delighted the audience with their stunning a cappella singing of secular and sacred Elizabethan songs. It was a faultless performance, with precise pitch, timing and harmony, and wonderful, sensitive interpretations of the music.  The ensemble of twelve, sang together and also in smaller groups of three or four to create slightly different emphasis of voices. The music was complex with four, six and eight parts but always, no matter how many parts, the voices blended perfectly into a glorious rich tapestry of sound. Most of these pieces would have been played at court to win the favour of Elizabeth I, a generous patron of the arts. The music was both sacred and secular although the distinction might have been blurred at court as some sacred music was also played at lively Elizabethan feasts.

Stile Antico is an unusually collaborative ensemble, who work together on all aspects of developing their repertoire and performances, and singing without a conductor demands maximum awareness of each other. There were three of each voice parts: Helen Ashby, Kate Ashby, Rebecca Hickey (sopranos); Emma Ashby, Eleanor Harries Clarke, Katie Schofield (altos); Andrew Griffiths, Benedict Hyams, Tom Kelly (tenors); James Arthur, Will Dawes, Nathan Harrison (basses).  Informative introductions to the music were given and this was supplemented by excellent programme notes.

The concert opened with Byrd’s joyful This Merry Month of May followed by two sacred songs, another Byrd and then Abserge Domine by Tallis. Byrd and Tallis were friends and creative colleagues as well as great favourites of Elizabeth, even though Byrd was a Catholic and therefore politically suspect.  (Byrd has a Henley connection.  It is said that Lady Periam, whose effigy is in St Mary’s Church, was at one time a neighbour of Byrd who gifted her a manuscript).

Three secular songs, which are thought to have been a gift from Erik XIV of Sweden, one of Elizabeth’s many suitors, followed. Maybe, if the aim was to charm a queen, it was a mistake for whoever compiled the book of songs to include Willaet’s Vecchie Letrose translated as Spiteful old hags and sung with great gusto.

After the interval the mix of sacred and secular continued: two beautiful lovers’ laments by Dowland. Now O Now I Needs Must Act and Can She Excuse My Wrongs were sung as by the love sick with only the merest hint of irony in the immaculate, rapid delivery. Then followed three exquisite psalm settings by Ferrabosco who may have been a Spanish spy at court but who was definitely an excellent Italian composer of madrigals. The programme concluded with three madrigals about nymphs, maidens, shepherds and Oriana, assumed to be Elizabeth, of course, by Wilbye, Farmer and Weelkes. This was a superb concert.   As one member of the audience said to me ‘How can you review this: it’s perfect!’ And it was.

The Henley Herald website provides an up-to-date and unbiased digital news service for
Henley-on-Thames
Give New Recycling Wheels a Spin!