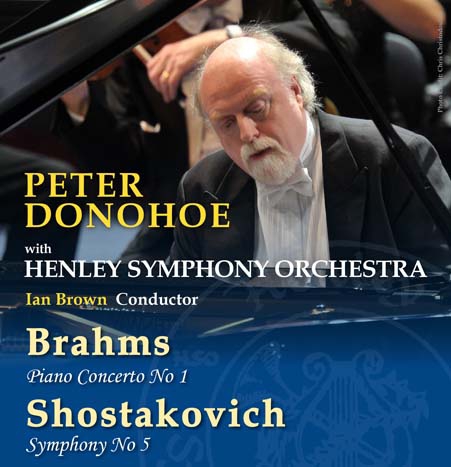 On Sunday 17 March the Henley Symphony Orchestra returns to the Hexagon in Reading for its annual spring concert, continuing a proud record of engaging eminent established soloists. This year, world-renowned pianist, Peter Donohoe, will play Brahms’s mighty Piano Concerto No 1.

Since his success as Silver Medal winner at the 1982 International Tchaikovsky Competition in Moscow, Peter Donohoe has built an extraordinary world-wide career, encompassing a huge repertoire. He is recognised as one of the foremost pianists of our time for his musicianship, stylistic versatility and commanding technique.

Brahms wrote this, his first piano concerto, at the age of 25. It has since become one of the pillars of the Romantic repertoire. From the opening ferocious drum roll, the music proclaims Brahms’s genius and youthful flair. It develops into a blend of grandeur and excitement, and there are moments when the orchestra and piano seem to be engaged in a titanic struggle.

The concert is completed by Shostakovich’s most frequently performed, albeit ambiguous, Symphony No 5, written in 1937 during Stalin’s Great Terror, when Shostakovich was working in isolation and fear after being denounced by the Union of Soviet Composers. Whether what is discernible in the music is political protest or capitulation to the Soviet regime has been the subject of much debate over the years, but no one disputes that the work is a masterpiece. It proved an immediate success, receiving a standing ovation at its first performance.

Henley Symphony Orchestra, under the guidance of its Music Director Ian Brown and leader David Burton, continues to attract players from across the Thames Valley. It promotes an annual series of four concerts featuring internationally acclaimed artists, providing high-quality classical music-making for the enjoyment of local concert-goers. Since its formation in 1970 it has given concerts in Henley’s twin towns of Falaise and Leichlingen and in 2017 performed at the Bled International Music Festival in Slovenia for the first time.  It appears regularly at Reading’s two main venues (Concert Hall and Hexagon) and last year gave its inaugural performance on the floating stage at the Henley Festival.

Ticket prices are: £20, £17, and £12 or half price for U16s and students. Discounts are available for groups, and one child goes free with a paying adult.  To book, call the HSO box office on 01235 859210 or visit www.henleysymphonyorchestra.co.uk/contact.  Tickets are also available from Reading Arts 0118 960 6060 or www.readingarts.com.