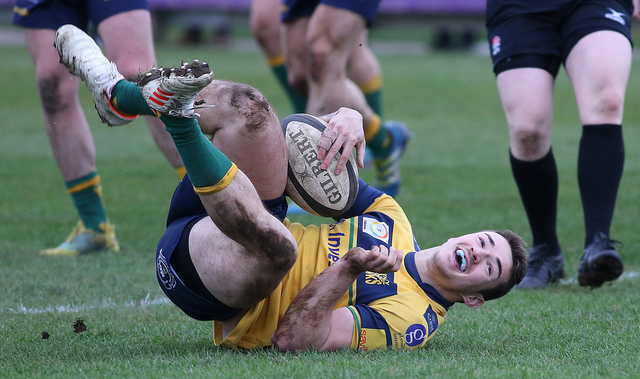 A Dan Barnes hat trick helped Henley Hawks to another win and another five points on the road at Clifton on Saturday. However, they were made to work hard by a resilient and committed Clifton side who played over half the game with fourteen men and who were surprisingly closer on the scoreboard by the end than the Hawks would have liked.

The Hawks played in patches, some outstanding and others indifferent. They quickly found themselves 21-5 down but rallied to score 28 unanswered points, trailing at the break by just two points and then taking control to lead 33-21 into the second half. Just as it look as if the Hawks had seen the game off, Clifton kept going and scored twice before the end and were camped on the Hawks line at the final whistle.

The game was played in very blustery conditions and the home side had first advantage of the wind and the slight slope. The Hawks had most of the possession early on but found it difficult to build any momentum as the Clifton defence was on them quickly and aggressive.

It was the home side that took lead after just six minutes with their first visit into Hawks territory. A penalty at the breakdown resulted in a Clifton line out and from a catch and drive, hooker Bono Edwards crashed over. Cozens kicking the first of his five conversions.

The Hawks replied immediately with some excellent rugby. A good run from the excellent Tom Hall, and then Leo Webb put the Hawks deep into the visitors half and eventually Dan Barnes cut through to score the first of his three tries.

The Hawks forwards were enjoying plenty of possession with Tom Emery and Tom Hall leading from the front.

However, Clifton looked dangerous when they got the ball and scored twice in two minutes to extend their lead. The Hawks defence and first up tackles were not as watertight as they had been against Taunton the previous week and a simple inside pass put Clifton winger Hugh Campbell clear. He was caught just short of the line, but from the resulting scrum, second row Matthew Davis fought his way over to score. Again Cozens converted.

The home side increased their lead straight from the restart as Jacob Morris caught the ball and cut through the Hawks defence to set up centre Chris Levesley to score. It could have been worse for the Hawks as a attack broke down and Morris broke clear but the Hawks defence managed to recover in time.

Gradually the Hawks gained control of the game and won a penalty in midfield and an excellent kick to the corner from Ben Bolster resulted in a line out to the Hawks. Dave Hyde claimed the line out and the driving maul was finished off by Dave Manning. Bolster converted.

The home side weren’t helped when they were reduced to fourteen men for the rest of the game. With two props lost to injury, they had no more prop replacements and so they had to play with a man down and the game went unsatisfactorily to uncontested scrums.

Just before half time, Henley reduced the arrears further when Hall and Emery again made good ground and a break from Dave Manning put skipper Sam Lunnon over to score. Bolster conversion meant the Hawks were just 21-19 down at the break.

Immediately after the restart, the Hawks showed their intent and from an attacking line out, the ball went out to the backs and Dan Barnes checked, beat a couple of defenders and scampered through to score his second try.

The ever dependable Dave Hyde was getting stronger as the game went on and he then made a break and with some good interplay with Hall and Emery allowed Alex Bradley to run 25m to score, which Bolster again converted.

Leading now by 33-21 and with the wind and slope in their favour, it looked like the Hawks had taking the game away from the home side and would see out the match without any further problems.

However, Clifton had other ideas and finished the game strongly as the Hawks struggled to use the conditions to their advantage. The home side were still ferocious at the breakdown and enjoyed more and more time in the Henley half.

The Hawks didn’t make life easy for themselves at times and as they tried to run out of their 22, the ball was spilled and resulted in an attacking Clifton scrum. With the Hawks pack unable to exert any pressure on the home forwards, an assault on the Hawks line led to second row Henry Harper crossing bringing the Bristol side within just five points.

The Hawks though, were doing enough to keep Clifton at arms length and another break from Dave Hyde set up Dan Barnes for his well deserved hat trick. Bolster converted.

Back came Clifton and reduced the Hawks lead again to five points when centre Chris Levesley crossed for his second try.

With their tails up, Clifton attacked again and the last few minutes saw Henley having to defend with everything they had. A poor clearing kick allowed the home side to run the ball back and Luke Cozens almost went over in the corner but the Hawks defence held firm. With Clifton on the Henley line, the referee finished an exciting eleven try contest.

Another good win on the road for the Hawks, scoring six tries against a highly committed and competent Clifton side. It keeps up the winning momentum that they can take into next weeks game against Birmingham and Solihull.