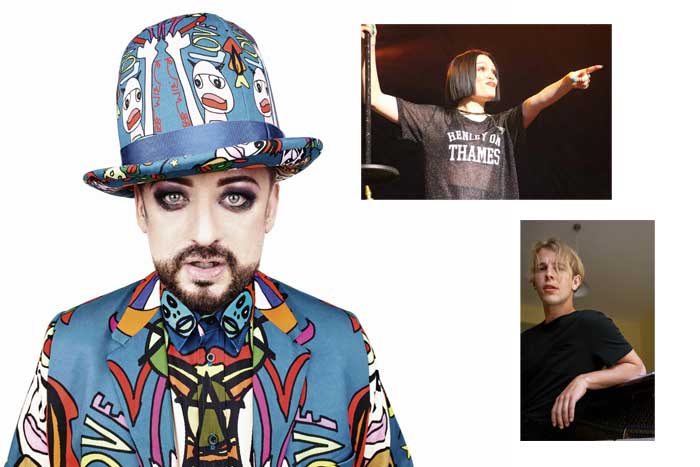 Pop icon and mega star Boy George will open the Festival on Wednesday night. Universally recognised as one of the music scenes most iconic artists Boy George was recently presented with the Ivor Novello lifetime achievement award.

The Grammy award winning singer has created a Worldwide presence that transcends age, race, colour, creed, nationality and even religion. To date George has sold over 100 million singles and in excess of 50 million albums as a performer and songwriter with 80’s super group Culture Club and as a solo artist in his own right. This new wave legend will bring his extravagant showmanship to Henley.

On the Thursday night, Henley Festival is delighted to welcome back multi-platinum selling artist Jessie J for the first concert of a 3 year retrospective bringing back some of Henley Festival’s most popular artists. Since her last performance at Henley Jessie J has cracked the US, written and released her latest album R.O.S.E and completed a hugely successful World tour, selling out shows in China, Asia, US & Europe.

On Friday night, the Festival audience are in for a treat as Brit Award and Ivor Novello-winning songwriting sensation Tom Odell takes to the floating stage. With multiple awards and 1.8 million sales under his belt, the Chichester-born prodigy has won over the British public. His 2013 breakthrough smash, ‘Another Love’ and debut album, ‘Long Way Down’, topped the charts in the UK and in 2014 he made the top ten again with a Beatles cover of ‘Real Love’, recorded for the John Lewis Christmas ad campaign. Alongside standout tracks such as ‘Grow Old With Me’, ‘Heal’ and ‘Can’t Pretend’, public affection for Tom and his quaveringly emotional way is at an all-time high.

In a Henley Festival first, Friday night’s performance by Tom Odell will be followed by a DJ set on the floating stage by the legendary Jo Whiley! Bringing you all the best tracks from the greatest decade for music, think Blur vs Oasis, Fatboy Slim, Primal Scream, The Verve, The Chemical Brothers, Faithless, The Prodigy and a whole lot more.

If you love Mamma Mia! Saturday night is for you, as Henley Festival welcomes the internationally acclaimed BJÖRN AGAIN show. Designed as a rocked-up light-hearted satirical ABBA spoof, the show rapidly achieved world-wide Cult status and acknowledged for singlehandedly initiating the ABBA revival which brought about ABBA Gold, Muriel’s Wedding and Mamma Mia! Hailed as “the closest thing you can get to seeing ABBA” by Benny Anderson himself, this brilliant band will bring the party and leave you with very sore feet!

Sunday night Henley Festival are delighted to announce that Classic FM’s popular film music programme Saturday Night at the Movies will be brought to life with the Royal Philharmonic Orchestra directed by Pete Harrison, with guest soloists Johanna Röhrig (violin), Oliver Poole (piano) presented by popular Classic FM presenter Aled Jones. This special showcase will be filled with popular classical music used in iconic films from the past 50 years together with some of the greatest Oscar-winning original soundtracks.

Music can be enjoyed before and after the floating stage perormance in the Jazz Club and the Bedouin tent.

The 2019 comedy line-up at the Festival is set to be bigger and better than ever, with the likes of Ed Byrne, Andy Hamilton, Julian Clary and Murray Lachlan-Young among the biggest names of the 20 comedians performing at this year’s Festival. The comedy line up will also include a very special performance by Richard Herring who will be recording the show for his podcast with Barry Cryer. One of Britain’s favourite comedians Julian Clary will also be bringing his jaw-achingly funny show to Henley. Brit pop era gem, stand up performer and poet Murray Lachlan-Young will present his latest stand up brilliance at Henley. After performing with the likes of Dita vo Teese and The Pretenders, Lachlan-Young’s set is not to be missed. In addition, up and coming comics including Vikki Stone, Kai Samra, Steve Bugeja and Luke Kempner will also be keeping audiences entertained.

This year’s grants from the Festival will again go to two local charities – Charlie Waller Memorial Trust who are dedicated to supporting young people with depression, and encouraging discussions around mental health, and The Teenage Wilderness Trust who support students who find it difficult to engage with mainstream education by offering reengagement courses using bush craft, wilderness learning techniques and practical life skills to encourage students to get back into learning.

Tickets go on sale to the general public on Friday 15 March via the website at http://henley-festival.co.uk