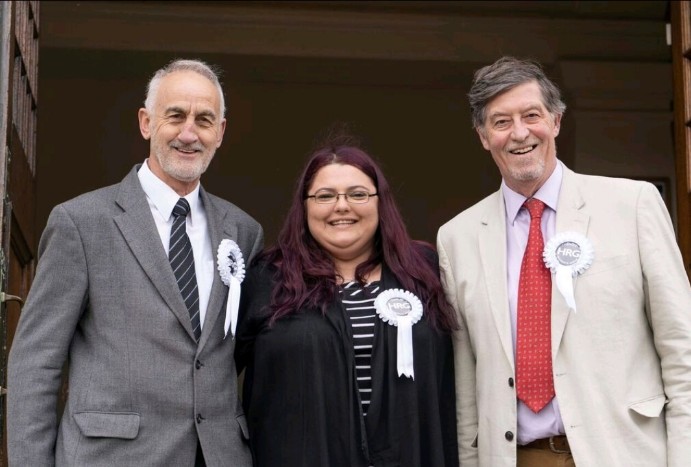 HRG has chosen their team to fight in South Oxfordshire District Council (SODC) elections on 2 May, comprising three Councillors, all former Henley Mayors – Stefan Gawrysiak (a current District and County Councillor), Ken Arlett (a former District Councillor) and Kellie Hinton (National Young Councillor of the Year in 2017). In all they represent over 50 years experience as councillors at different levels.

Stefan comments on the strength of the team “I have been successful in achieving many of my objectives in the SODC, having this team on SODC means we will have a strong voice, communicating the same message, able to ensure Henley’s needs are properly taken into account at district level. Combining our whole is greater than the sum of our parts.”

The past 12 years has shown little or no opposition to the Conservative led SODC, resulting in cuts in funding on the Henley’s Tourism Information Centre, and its Town Centre Manager, One Stop Shop, PCSO’s, Air Quality Improvements and Car Parking.

Sadly, this list will go on and on with SODC setting a 31% deficit budget of £2.3 million this year.”

Ken comments, “With my previous experience in SODC and now chairing the Town’s Planning and Neighbourhood Plan Committees, it is time to engage with SODC once more – they are the planning authority for Henley and we need to ensure our concerns are met for the future, which can only be good for Henley.”

He is also concerned over the grants process – “some years ago its budget was £1.5 million, but this year, its budget is only £500,000. Henley’s clubs and societies are dependent on these grants and we need to voice their needs”.

Stefan has lived in Henley for 35 years and was formerly Assistant Head Teacher at Gillotts School before retiring after 30 years. He is a member of the Henley Bridge Rotary club, Henley Show committee and formerly a Trustee st The Chiltern Centre. When he was Mayor he started Music on the Meadows with Maggie Atkinson to provide a free music festival to showcase the brilliant talent of the young people of Henley. “As Henley’s County Councillor I have secured funding for many road repairs in Henley, the 20 mph zone for central Henley and the studies to reduce HGV’s to 7.5 tons. I believe in pulling my socks up and working hard for our town and community. As District Councillor for Henley I have been very successful in getting the job done for Henley. HRG in conjunction with Grundon removed the business waste in the evening from the streets of Henley. HRG successfully made sure that our local community bus was secured Monday to Saturday. I secured the £100,000 for air quality measures in the district council budget; we have plans for £43,000 of this money for Henley. We have had major funding to refurbish the Gillotts leisure centre and I will continue to press for fair funding for Henley’s schools which have a funding deficit of over £100,000.
My Councillor grants have gone to the Henley Cricket Club, AFC Henley, Henley Operatic and Dramatic Society and much needed road repairs.”

Kellie comments “with Ken and Stefan, my colleagues for years, we make a good team. With their experience and knowledge and my youth and enthusiasm, we will be a force to be reckoned with.” Her council interests and experience are primarily based around recreation and amenities. Kellie says, “I want to ensure we have a strong SODC voice fighting for our open and green spaces, air quality, conservation, waste collection, litter management and our sustainability as a town and as a district”. She also feels strongly that “having a team of three independent HRG councillors, will stop what has been evidenced by SODC Conservatives as towing the party line.”

Leader of HRG, Gill Dodds states “this team brings together the younger and older generations – delivering energy, enthusiasm and those little grey cells – a perfect combination for Henley, and probably the strongest we have ever put forward! They will help stem the upheaval taking place at SODC. Stefan, Ken and Kellie have all shown their passion for Henley and the needs of its residents. HRG’s executive committee is 100% confident they will work for the interests of the town and the district rather than for political reasons.”