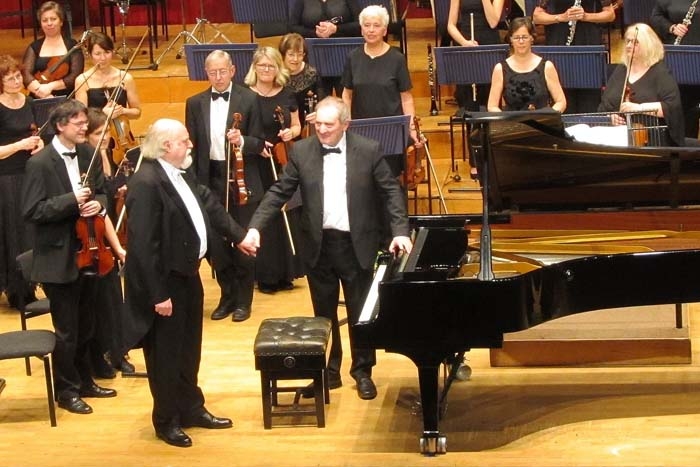 Once again, Henley Symphony Orchestra delighted a large enthusiastic audience last Sunday by performing with a world-class star, Peter Donohoe, a wold renowned pianist, who provided a memorable, virtuoso first half of the concert, playing Brahms Piano Concerto in D minor op15. This concerto was written when Brahms was a young man, underwent various revisions and was first performed when Brahms was twenty-five. Not surprisingly then, it portrays the angst of youth, reflects sorrow over the loss of his friend, Schumann, but also Brahms’ regard for Clara Schumann. It is a wonderfully rich, emotionally charged piece in three movements, with testing orchestral input, tackled with verve by the orchestra. The first movement, Maestoso, starts with a dramatic drum roll and violins developing one of the melodies, soon joined by horns and wind. This was wild, showy music in the classical genre. The following Adagio is quieter and reflective, beautifully played by Donohoe, of course, but with truly lovely stretches of string and woodwind. This impressive piece ended with a lively Rondo. The orchestra were, perhaps, grateful to get safely to the end knowing that they had executed a difficult piece well while performing with such a star as Donohoe. Bravo.

The second half was a contrast, Shostakovich’s Symphony no 5 in D minor op 47, another dazzling piece, considered by some as being his best but very much from another era. Written in Stalin’s 1930s Russia, much has been made of the underlying motivation and message within the piece. He withdrew his fourth Symphony after criticism and his fifth was to demonstrate that he was a patriotic Russian. However, having attended Peter Donohoe’s engaging pre-concert talk when he shared some of his Russian experiences with the audience, I wondered how much we interpret Shostakovich’s music through ‘Western propaganda’. This is lively, exciting music played on an impressive array of orchestral instruments including a big percussion section, harp, celeste, and plenty of brass contributing greatly in the march-like patches. There are four movements with the second movement, Largo being the most overtly lyrical and considered by Shostakovich to be the heart of the work. The hints of music from an orthodox requiem have been interpreted by some as mourning for the victims of Stalin purges. Maybe. The final fourth movement, Allegro, takes off with loud drum beats with plenty of brass and concludes this exciting work with a flourish. Well done, Henley symphony Orchestra and well done and thank you to Ian Brown for once again presenting a wonderful concert.