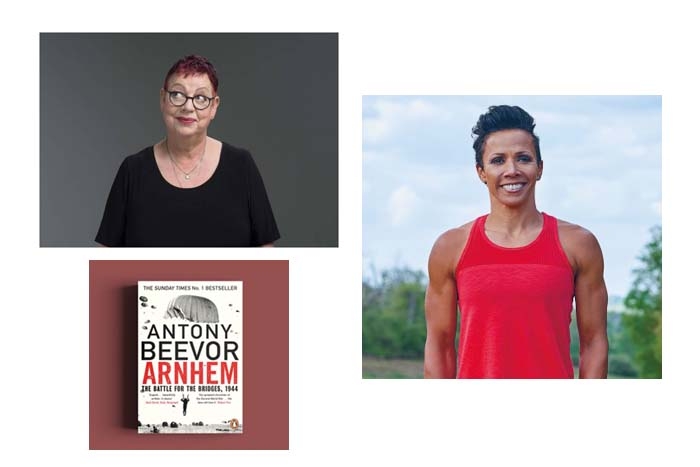 An Olympic superstar, one of our funniest and most thought-provoking comedians, a fashion whizz and a style guru and one of the country’s leading historians come to Henley in the latest events before the Literary Festival’s annual nine days feast begins in September.

First up on 15 April is historian Antony Beevor with his acclaimed book about Arnhem, one of the fiercest battles of the Second World War. It was a dramatic attempt in September 1944 to end the war but it ended in bloody tragedy and 75 years on Antony Beevor looks at the battle, which featured the greatest paratroop force ever seen.

Next up is the wonderful Dame Kelly Holmes an athlete much-loved for her charm and determination. The former army officer had won Commonwealth Golds but World and Olympics Gold eluded her until at the relatively senior age of 34 in Athens she won both the 800 metres and 1500 metres. There was no more popular winner and she comes to Henley on May 16 to talk about her book Running life which is a guide to getting the right mind-set, fitness and nutrition for positive well being. Could there be anybody better than Kelly for advice? She is the first part of a dazzling double bill at the River and Rowing Museum on 16 May.

She is followed by The Edited and The Frugality, better known as Instagram stars Erica Davies and Alex Stedman. Erica is a stylist, fashion journalist and brand consultant, with over fifteen years of experience in the industry as Fashion Director on national newspapers and magazines including LOOK, The Sun and The Daily Mirror who writes her take on style, shopping and more on her blog The Edited. Alex has over 209k Instagram followers and over 250k monthly visits to her blog that covers fashion, interiors, travel and culture but always comes back to finding value solutions to the lifestyle choices we all have to make. This is an amazing chance to spend time in the company of two influential women as they talk about The Books that Shaped My Life.

As summer arrives – we hope – get ready for the force of nature that is Jo Brand who is doing two shows 13 June, the first sold out in 33 minutes. How to describe Jo? Yes, she’s a comedian, she’s also a writer, she’s a passionate politico, a television presenter….a woman of many parts. Her book Born Lippy is a gathering of things she wishes she’d known earlier, things she has learnt and all the things she hopes for the future. Her experiences as a psychiatric nurse, stand-up and working mother of two, promise hilarious  events that will be both entertaining and even educational. Tickets for the newly added 2pm event will go on sale at 10am today (22 March).

To book tickets go to henleyliteraryfestival.co.uk/