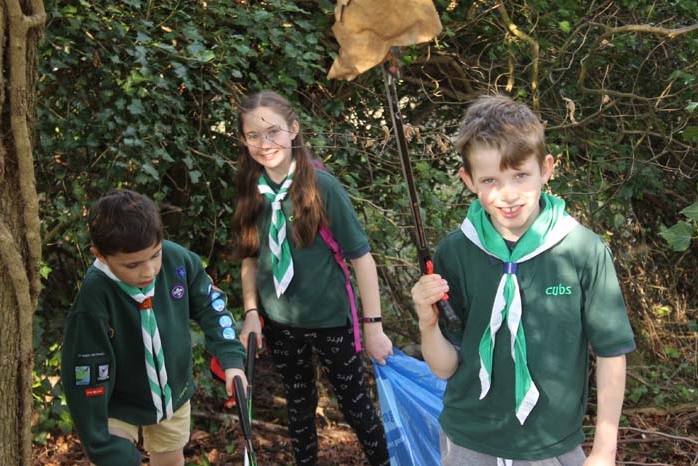 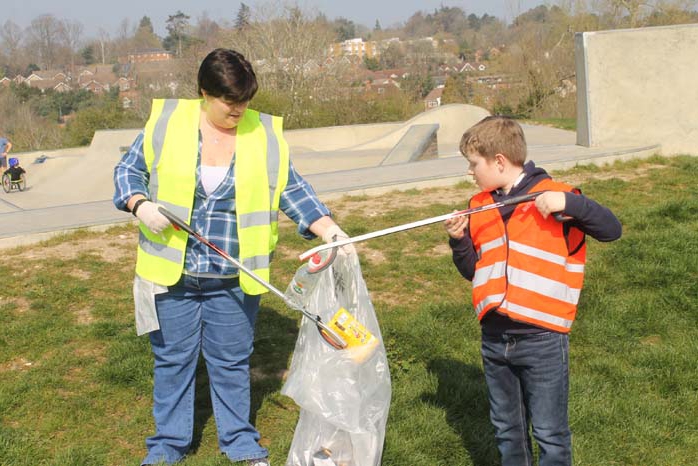 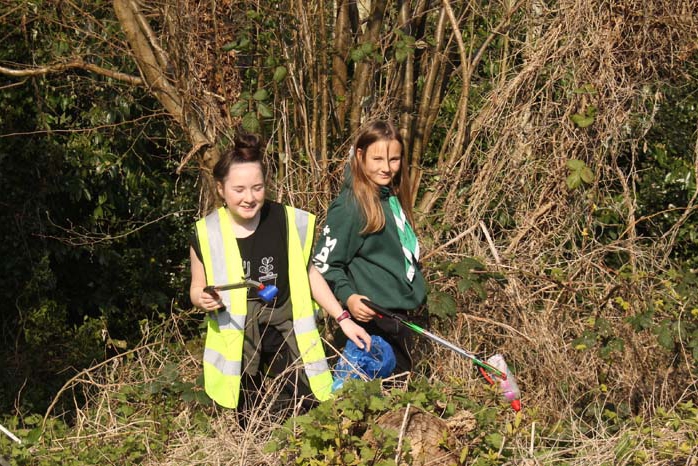 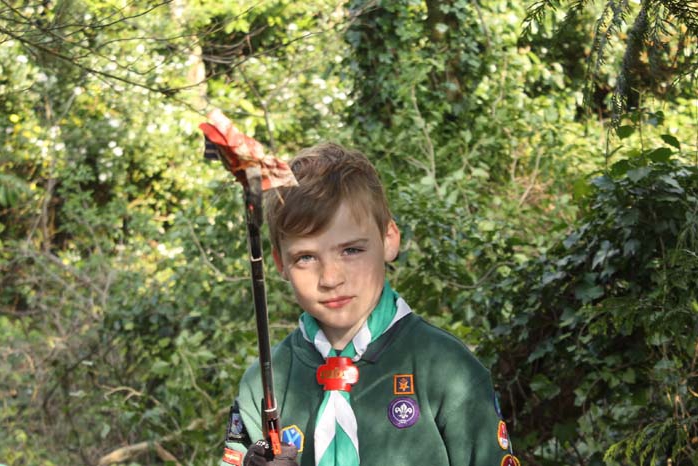 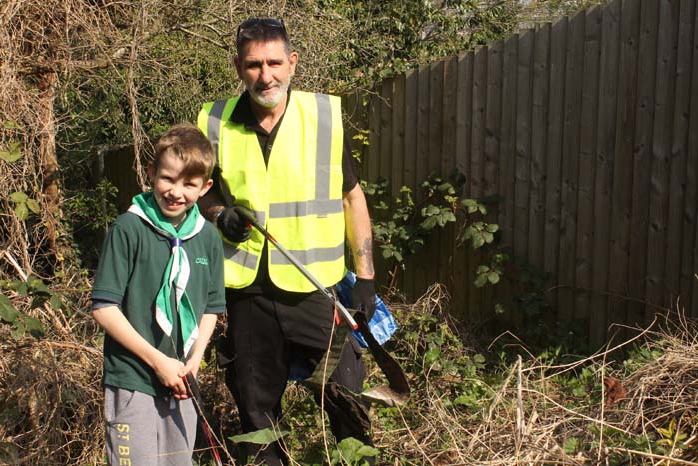 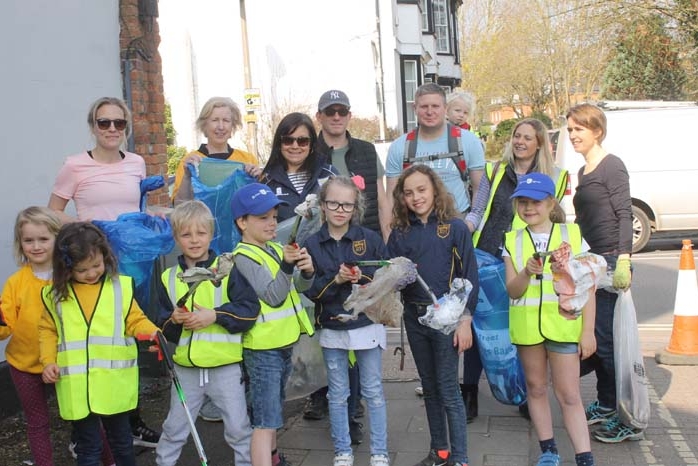 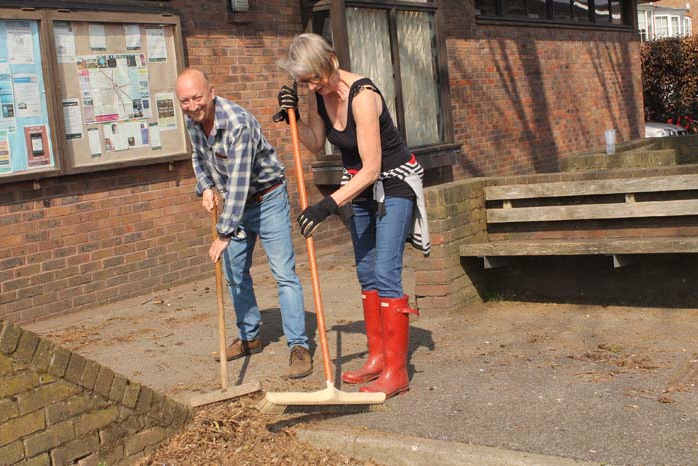 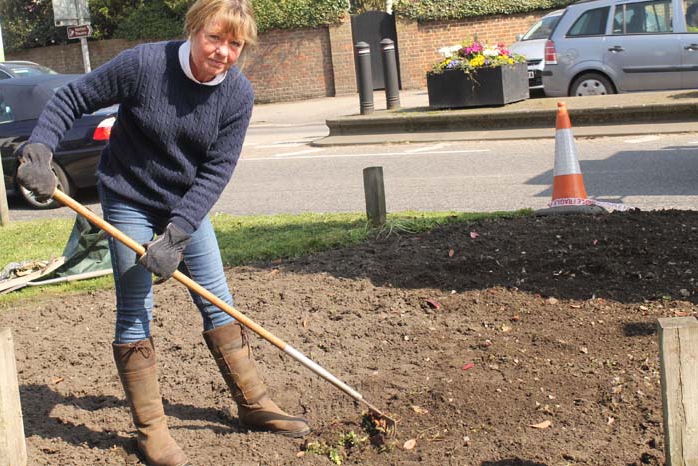 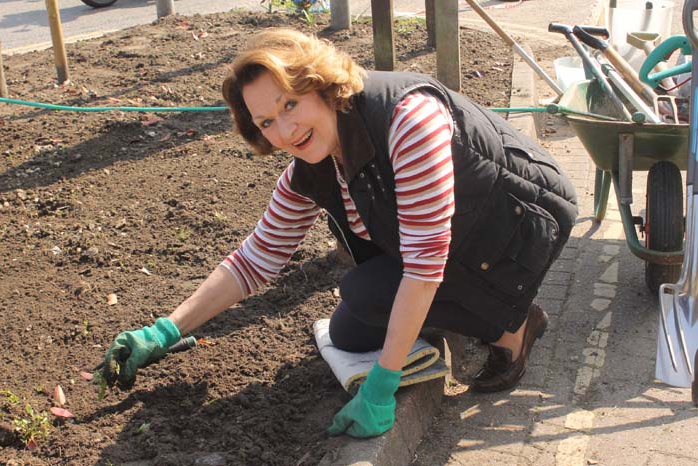 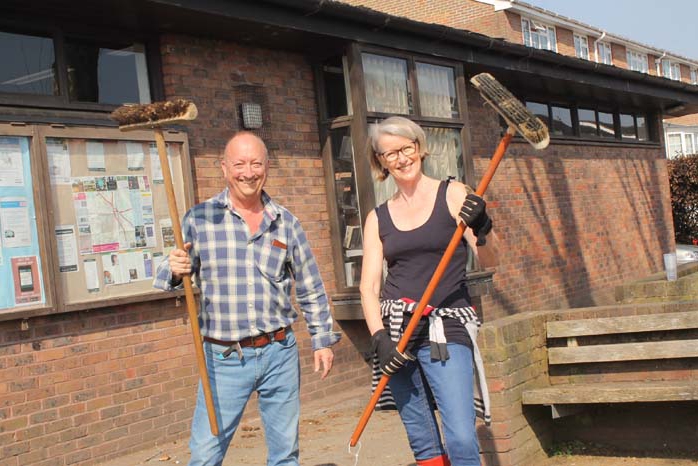 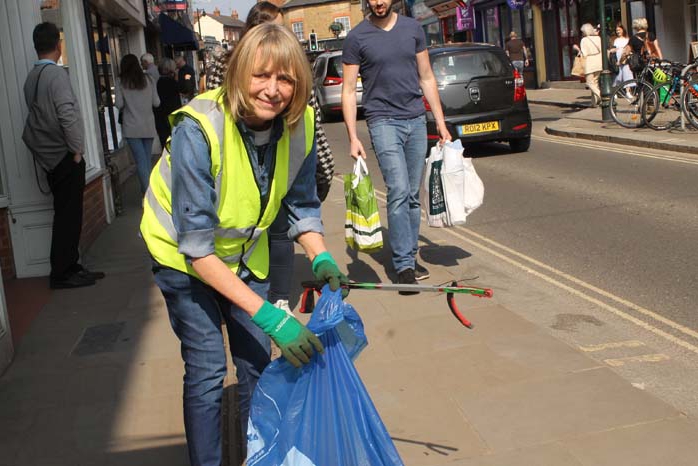 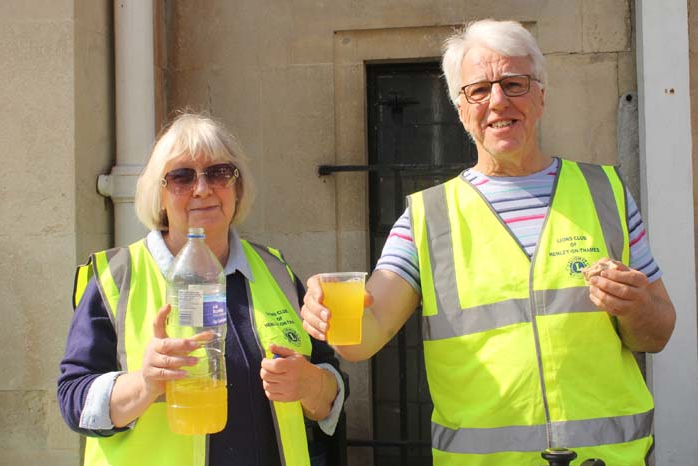 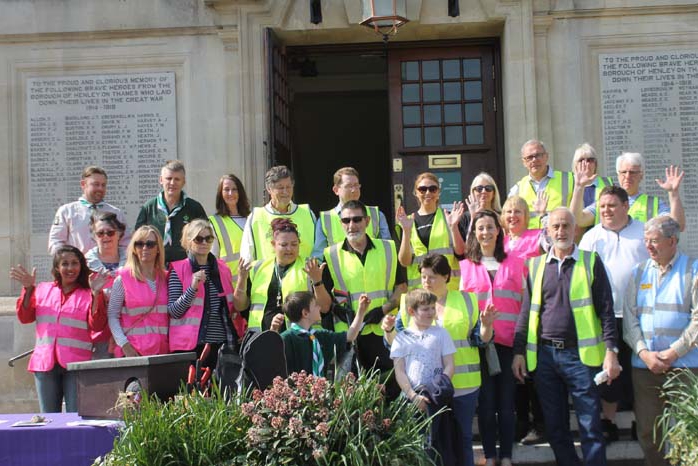 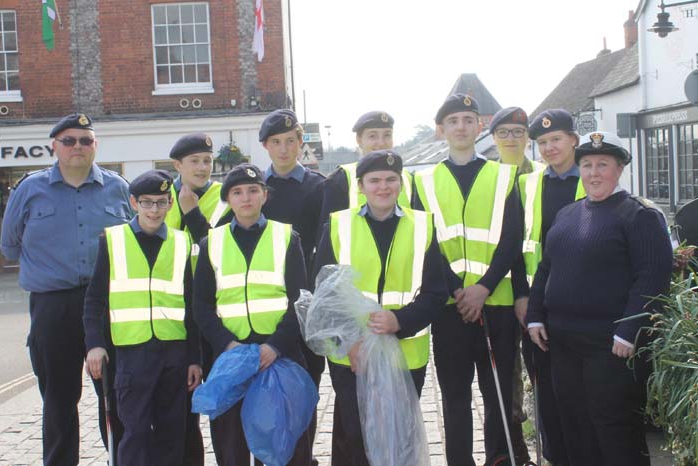 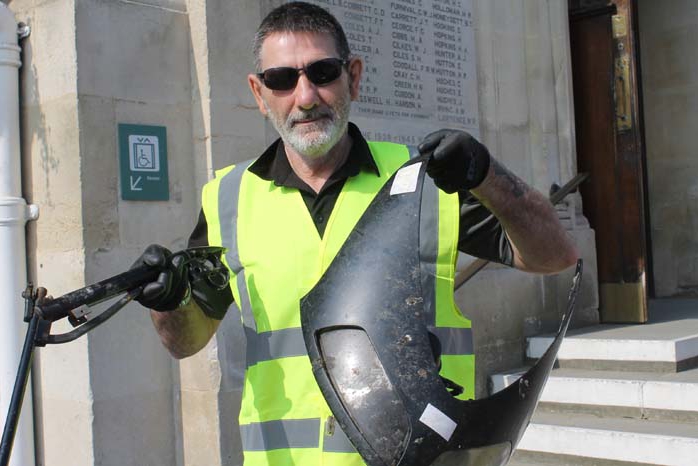 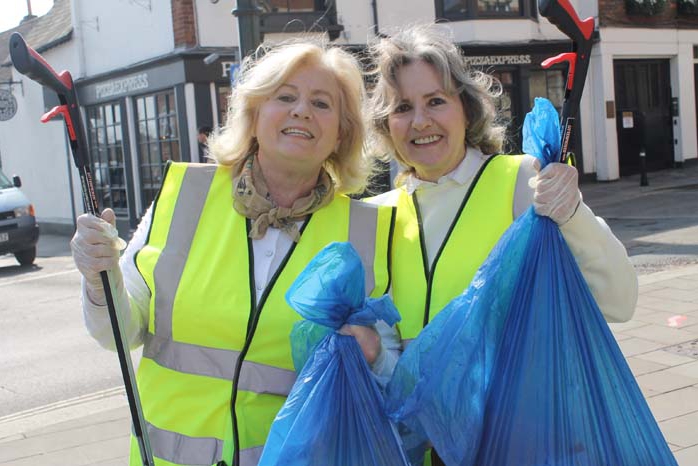 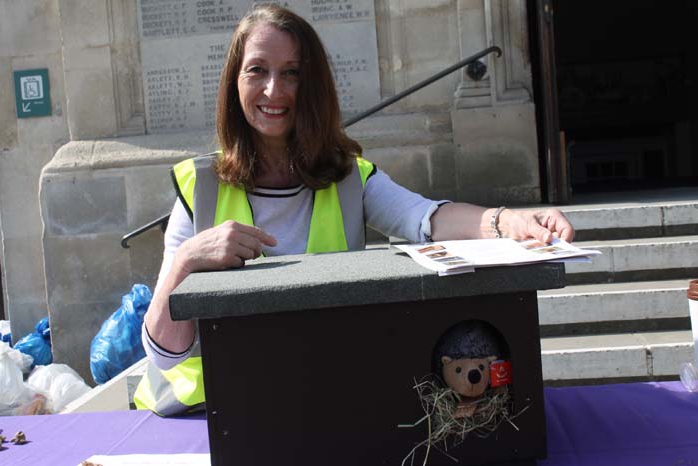 Henley residents, councillors and volunteers from Henley WI, Rupert House School, Cubs, Scouts and Sea Cadets all joined together to give the town a Spring Clean on Saturday in the sunshine.  Each group were given an area to clean up and were provided with litter pickers, gloves and bags by Biffa.

1st Henley Cubs and Scouts went with Councillor David Eggleton to clear the Water Works footpath behind Deanfield Road and the woodlands around Haywards and Harcourt Closes.  They found a sleeping bag, barbecue grill, a huge part of a motorbike and a pair of jeans.

The Sea Cadets set off to the other side of the river to clear the footpath from Leander Club up to Upper Thames Rowing Club.  Officer in Charge, Abigail Bollon said, “We found a discarded boat fender, loads of glass bottles and an abundance of dog poo bags.  We picked up those on the ground and also those that were hung on trees – why would you do that?”

Helen Gaynor and her husband Alan cleared the area around the library in Greys Road car park.  Not only did they clear the rubbish they brushed up all the old tree leaves and scrubbed and brushed up the walled seats.  Helen also helped other Northfield End and Bell Street residents weed and rake the new planting area at Northfield End roundabout ready for planting.   Helen said, “Very many thanks to local residents Dorothy, Val & Derek, Pauline & John, Helen & Nigel and hubby Alan who gave up their time on Saturday to weed the shrub bed ready for planting and strim/mow the grass on both Northfield End and Bell Street Greens, with our new ‘community lawnmower’, and for pledging their support going forward in the upkeep. Thanks also to those residents who did their bit around their own properties. Many hands really did make light work and a lovely coffee & homemade cakes were enjoyed thanks to Val’s fabulous hospitality. The weather was thankfully perfect and a good time was had by all.”

Paula, Rob and Jamie Isaac from Gainsborough cleared the rubbish from Makins Recreation Ground.  Paula said, “I think surprisingly there is less litter here this year than last.”

A group of children, parents and teachers from Rupert House School joined in for the first time even though they had broken up for the school holidays.  Their route took in areas around the school.  Henley WI volunteered to do St Marks and St Andrews Roads.  Rebecca Chandler-Wilde said, “The biggest problem was as I’m sure it is everywhere are cigarette butts.”

Catherine Notaras from Henley in Bloom had a table at the Town Hall promoting the conservation of hedgehogs and the affect rubbish has on our wildlife.

Councillor David Eggleton, Chair of Henley in Bloom said, “It’s been a fantastic day. We have done ourselves proud. I think it’s brilliant that we’ve had all different organisations, groups and cross party councillors getting involved in doing the litter pick today.  The amount of bags of rubbish we have cleared off the woodlands, car parks, streets and hedgerows is good thing too for the wildlife as they can get attached to things and eat the wrong things.  It has been a much bigger turn out than last year and it has been a nice atmosphere and I think everybody has really enjoyed it.

Afterwards all the volunteers were invited to refreshments at the Town Hall provided by David and Chris Skinner and from Henley Lions.