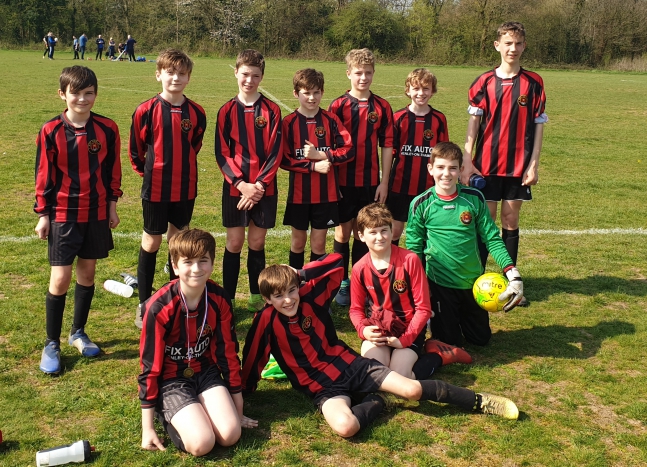 The U12 AFC Henley Hurricanes ran out 3-0 winners away at the Marlow Tigers in the East Berks Division One game that resulted in them consolidating their top 4 position in the League.

On a gloriously sunny morning the Hurricanes were fearful of a mauling from the hitherto unbeaten Tigers who had won all 8 of their Division One games having been promoted at Christmas.

However their fears proved to be unfounded as the Hurricanes gave their best performance of the season and sent the Tigers packing with their tails between their legs.

The match started well for the visitors even though they were kicking up hill and into the bright sunlight. Tom Bonser started the game on the right wing and an early sortie down that side brought a good tackle from the Marlow defence that resulted in a corner and an early chance for the Hurricanes that eventually was cleared.

Recent signing Joe Winpenny has looked all class in his two matches he has played for the Hurricanes and his speed and positional sense meant that the Tigers attacking options were severely limited.

Having kept things tight for the first 15 minutes the visitors now started to get on the front foot. A bursting run through the middle by Tom Yeoman brought a good save from the Marlow keeper but Sam Robinson was on hand to neatly tuck away the rebound and put the visitors 1-0 up.

One nil up at half time and with the slope in their favour and sun at the backs there was only going to be one winner in the second half.

Tom “the assist” Atkinson threaded an inch perfect ball through for striker Yeoman and Yeoman left the keeper with no chance as he thrashed the ball home from 8 yards to make it 2-0.

With their tails up the visitors put the Tigers firmly back in their cage as Ollie Colvin marauded down the left and created plenty of chances. One such chance fell to Joe Turner who hit a sumptuous half volley that was heading for the top corner only to see it unluckily deflected wide off a Marlow defender.

It was credit to the Hurricanes defence that keeper Oliver Saunders only had long range shots and set pieces to deal with but he did this with the minimum of fuss and his handling was excellent throughout the whole game.

Making his league debut for the Hurricanes was Harvey Herbert and he quickly assumed the role of midfield playmaker as his size and strength made it impossible for the Tigers to deal with him. Herbert latched onto another Atkinson through ball drawing a good save from the keeper only for Yeoman to pick up the loose threads and make it 3-0. Ethan Holliday was proving to be the perfect foil for Herbert in the middle of the park as he anchored the midfield and protected the back 3 with his intelligent reading of the game.

Sam Robinson, who had had an excellent match down the left wing, almost made it 4 at the death but the Marlow keeper produced yet another heroic save to keep the scoreline as it was.

Managers Turner and Atkinson were said to be delighted by the performance of the Hurricanes and the team spirit they had shown and were now looking forward to building their 11 a side squad for next season.

If any boy or girl wants to join AFC Henley then please come down to Jubilee Park on Friday nights at 6.15pm or see the AFC Henley website for further details.