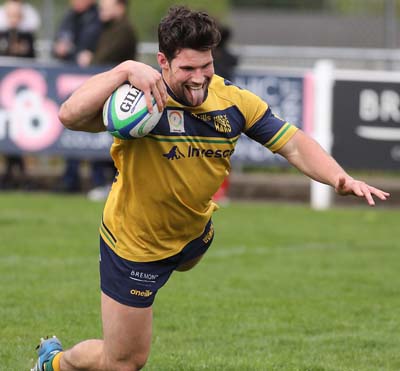 Henley Hawks finished the season with a comfortable bonus point victory over a spirited Bury St Edmunds at Dry Leas on Saturday.

It was typical end of season fayre. Blustery conditions, plenty of endeavour but a lot of mistakes as both sides attempted to play enterprising rugby but the Hawks proved too strong in the end and ran out comfortable winners, scoring five tries to two.

It was a scrappy start, but it was always the home side who looked the more threatening when they had the ball. The excellent Dave Hyde drove well to give George Wood some space early on and Brad Cook was prominent in the loose with Tom Hall excellent in disrupting the visitors possession.

It was Henley who eventually opened the scoring when prop Brad Cook ran a good angle to run 25m to score. Liam O’Neill converted.

The Hawks tried to force things a little too much at times and the men from Suffolk started to enjoy their fair share of possession putting pressure on the Hawks defence which eventually resulted in a yellow card for Hawks hooker Tom Emery. One five metre scrum was halted by the Hawks before the dominant Bury scrum levelled the scores with a penalty try.

Henley still looked like the side more likely to score, with Dan Barnes cutting through to link with Tom Hall. The ball was taken on by Elliot Deacon and created space for the vpbacks only for the ball to dropped when a try looked likely.

Henley did regain the lead just before the break when Jake Albon and Alex Bradley produced good drives to set up skipper Sam Lunnon who scored to give the Hawks a 12-7 lead at half time.

Henley came out for the second period with much more purpose. A good break from Liam O’Neill, carried on by Dave Hyde put the Hawks in the front foot straightaway.

A good move again involving O’Neill and Hyde put George Griffiths clear but he was held up just short of the line. Henley’s intent was rewarded shortly afterwards when Dan Barnes broke clear to put Liam O’Neill over for a try which he converted himself.

Henley were dominating now and looking far more threatening than their opponents. It looked as if the visitors were beginning to tire and after a good period of pressure from the Hawks, Leo Webb’s quick penalty allowed Dan Barnes to score the bonus point try. O’Neill converted.

The Hawks extended their lead further when a Bury attack broke down, Dave Hyde collected a loose pass and made an exquisite pass to put Leo Webb clear and in for the Hawks fifth try.

To their credit, it was Bury who started to secure more possession towards the end. Thee scrum was dominant and they went close through winger Levi Roper. The Hawks defence was as tenacious as ever and they did everything to stop the visitors from scoring. Eventually the visitors put together a good move involving Tuidriva Uru and Anton Limlei which allowed Mike Stanway to score in the corner.

The players from both sides looked relieved at the end as the referee bought proceedings and the season to a close. It has been a fine season for the Hawks who finished an impressive fourth in the league with a total of 120 points. With new coaches at the start of the season and a great spirit and togetherness in the squad, the team have put down excellent foundations for the next campaign for a sustained challenge for promotion.

HAODS Present Half a Sixpence
Scroll to top