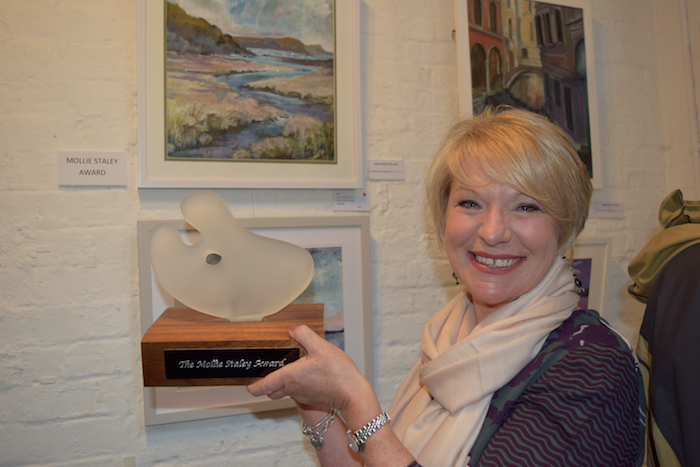 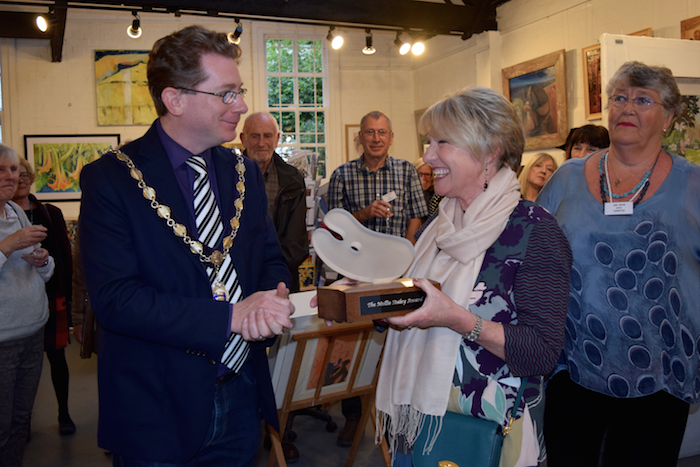 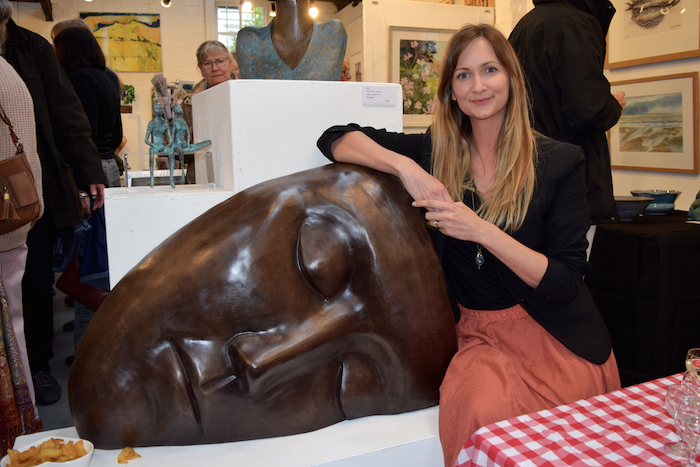 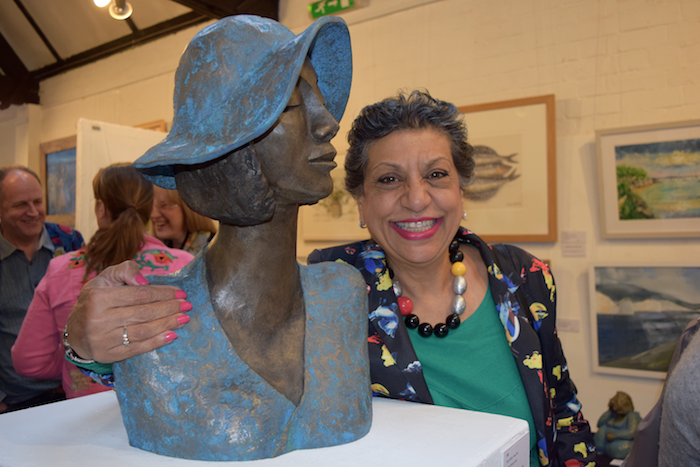 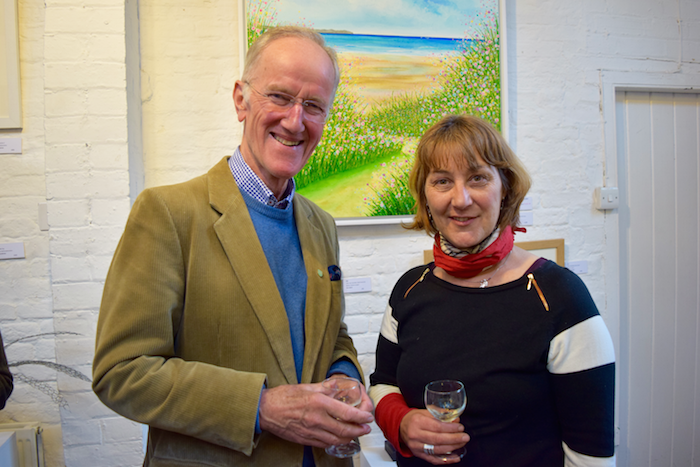 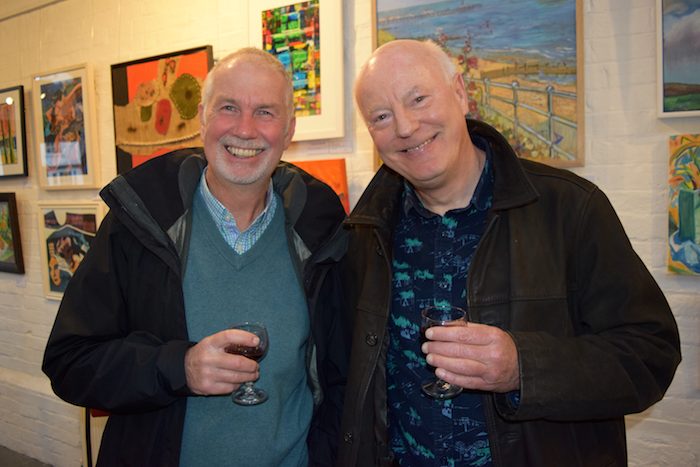 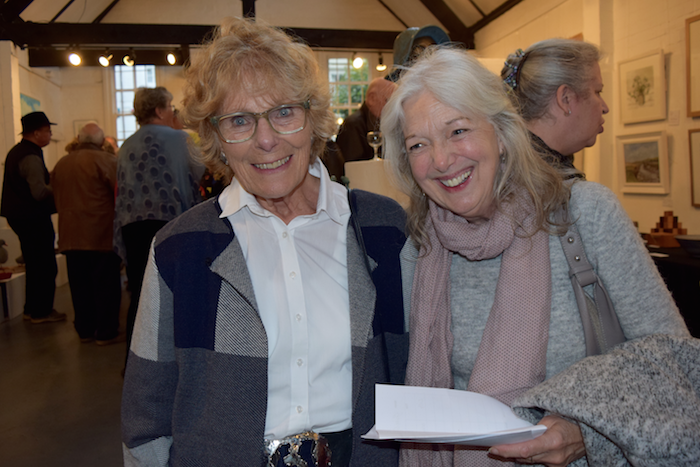 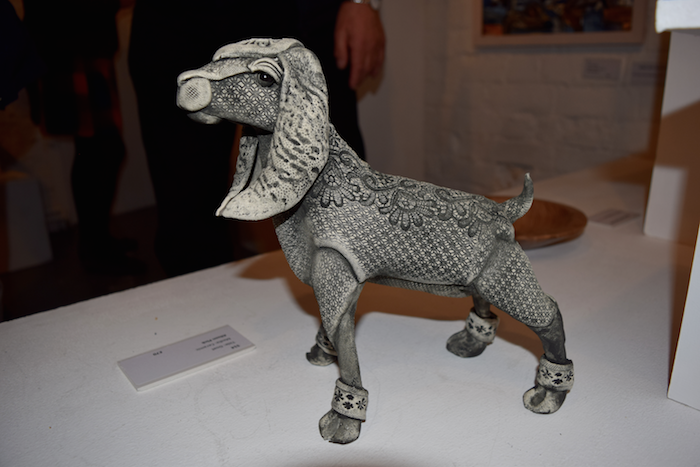 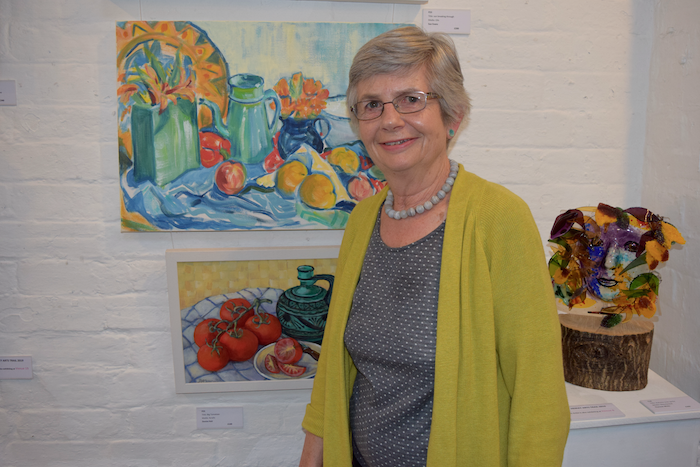 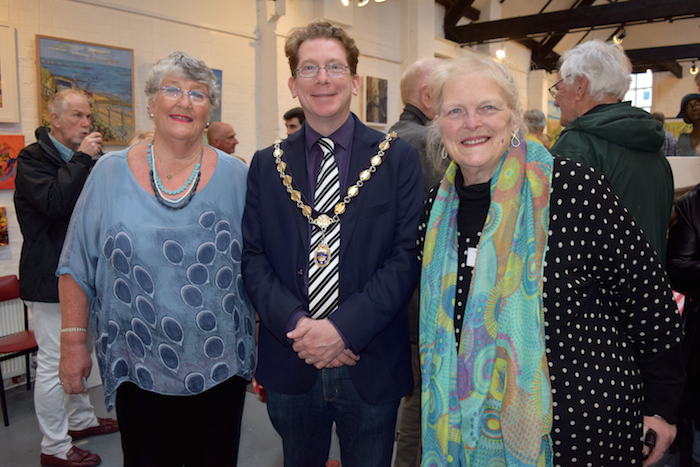 The 14th Henley Arts Trail began with a flourish at last Friday’s opening of the Henley Art & Craft Guild’s Spring Exhibition. Sculptors, painters, portrait artists and jewellery makers were amongst the many accomplished craftsmen to celebrate the launch of the annual exhibition at the Old Fire Station Gallery. Featuring works created by a number of the Guild’s 200+ members, the exhibition is a testament to the fine selection of talent based in Henley.

Friday’s launch party saw the presentation of the Mollie Staley award, named in memory of one of the Guild’s founding members. Awarded annually for the best picture in the Spring Exhibition, the trophy was claimed this year by Sue Evans for her painting, ‘Towards the Sea’. After being handed the stunning glass and mahogany trophy by Mayor Glen Lambert, Sue enthused, “I’m really honoured to have won it, and actually I can’t believe it because I’ve been painting all my life but this is the first prize I’ve ever actually won. It’s not my normal style; I’m exhibiting at the Memorial Hall but it’s a totally different style and this is a new venture, which is obviously quite good so I’m going to carry it on!”

Despite Sue’s thoroughly deserving win, there was fierce competition for the award, with many artists highly commended for their work. One such artist was Louise Shaw, whose charcoal sketch of a dog encapsulated its title of ‘Best Friend’. “I long for a dog but lifestyle isn’t allowing it,” she said, “so I do animal portrait commissions for people. It was just dog portraits but I’m branching out now to do horses and cats. I love it because I get to spend really intimate time with the animals. You get to really know the character.” Louise continued, “You fiddle and poke and smudge until, once they look back at me, and they twitch their snout or their ear, that’s when I know it’s done. They need to come alive; then I’m happy.”

One of the most striking pieces on display is Laura Jane Wylder’s ‘Large Sleeping Face’, a near-metre long sculpture that showcased at Henley Festival in 2018. Originally crafted from clay, Laura’s husband and business partner Sebastian moulded and cast the tranquil face in resin to make it easier to move. Laura explained, “I wanted to make something that was suitable for the garden that, if you wanted to move it through the seasons, you could do. It’s not a so big a structure that there all the time but it’s very peaceful and works in a lot of different settings.” The HACG Spring Exhibition was a significant event for Laura, only just embarking on her professional career. “We’ve got an artisan studio at Chelsea Flower Show this year, which is a massive privilege,” she said. “I’m really looking forward to it — it’s the first year that I’m really promoting myself as an artist, and this here right now is my very first public outing as a proper artist.”

The HACG Spring Exhibition at the Old Fire Station Gallery is Venue 1 in this year’s Henley Arts Trail, which takes place over the coming Bank Holiday weekend. Arts Trail founder and long-standing Guild member, Kate Findlay, formed the event in 2006 when she was Chairman of the HACG. She said on Friday, “What I never really thought about was that, 14 years later, I’d still be involved in running the trail, and here we are now. I can’t believe in all that time, it’s still been going on, and what’s wonderful is how much it’s grown in that time. The first year we had 16 venues, and this year we have 33, so it’s just been a growth year on year. What’s really wonderful about the trail is that it’s a true collaboration between artists and it is one of the most cost effective means for artists to be able to show their work to a large audience.” She added, “It is a really wonderful collaborative event and I hope we will see lots of you going round the trail next weekend; it’s going to be a fabulous event and we’ve got fabulous artists.”

The Henley Art and Craft Guild’s Spring Exhibition is on display at the Old Fire Station Gallery until 4pm on May 6th, whilst the Henley Arts Trail takes place this weekend. Both events are completely free; what better way to spend a Bank Holiday than to marvel over the masterpieces of local Henley artists!