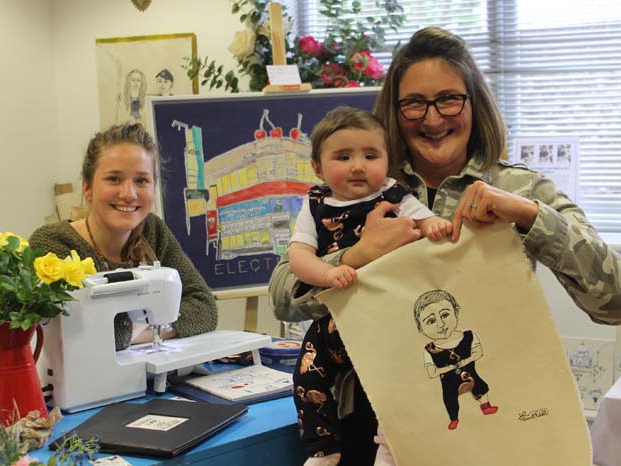 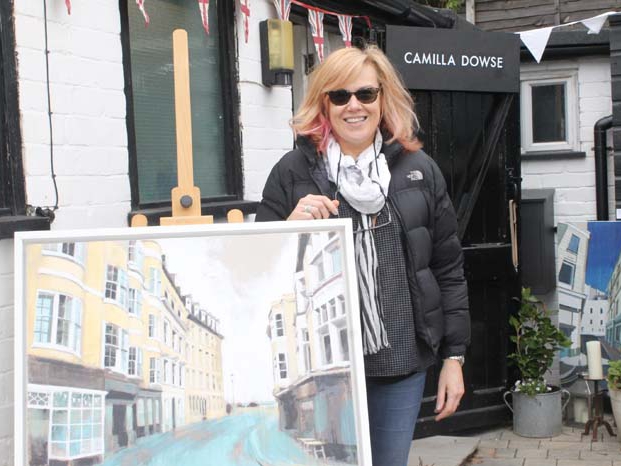 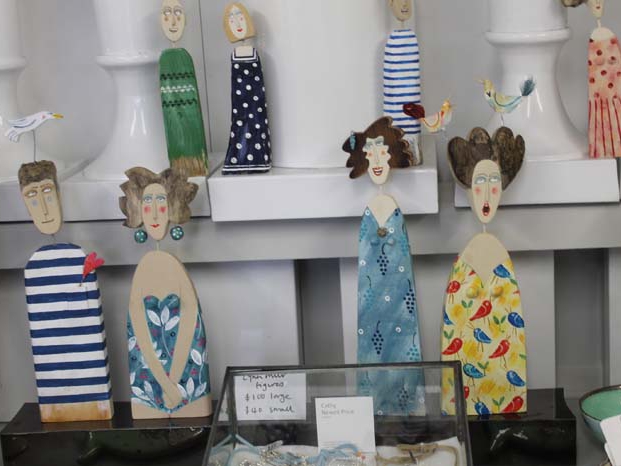 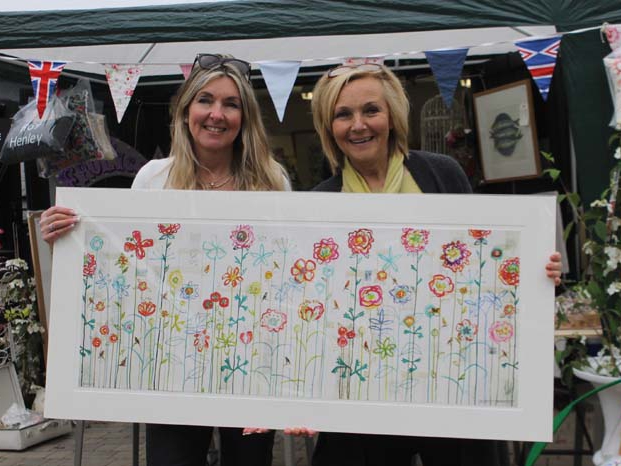 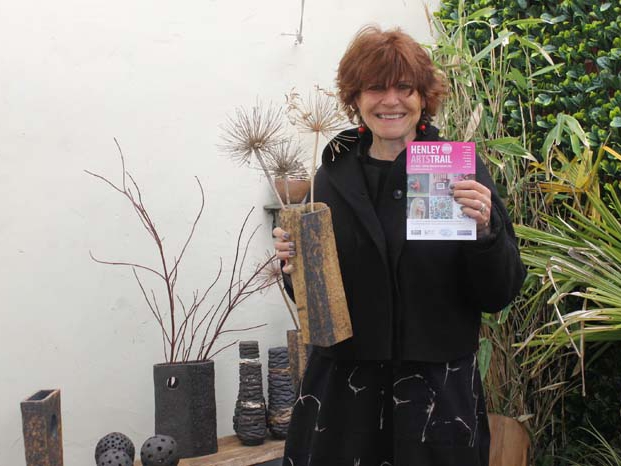 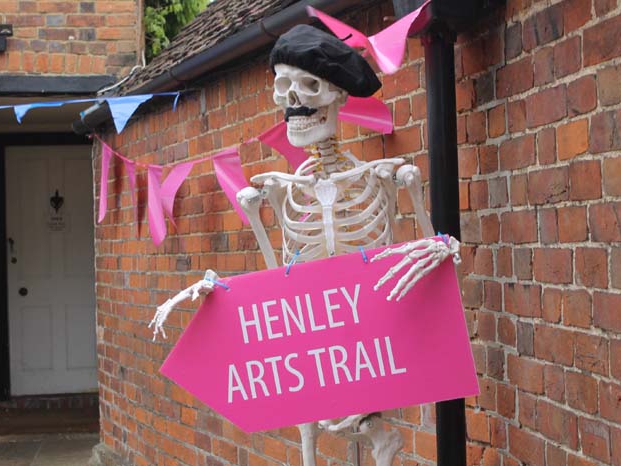 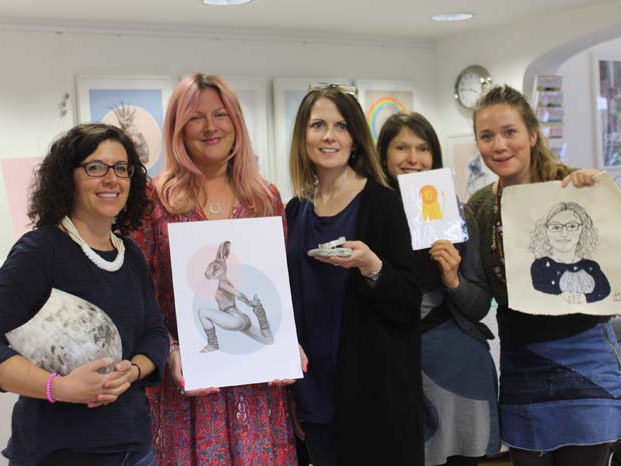 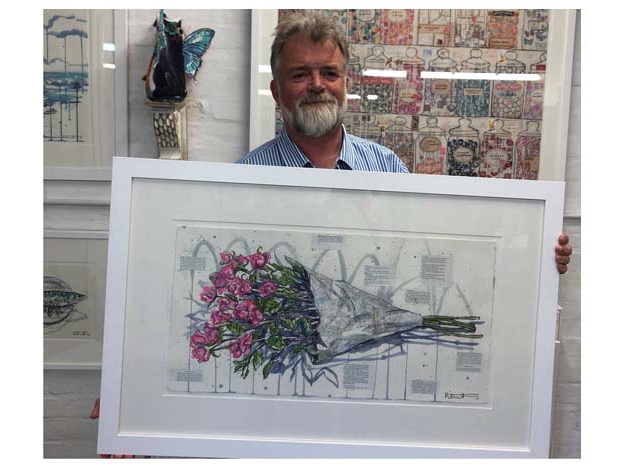 It’s not just locals who visited the Henley Arts Trail (HAT) over the bank holiday weekend.  It’s reputation and draw to see top artists and their work gave the town a great boost despite the cold weather. Jane Cockrem came especially with her husband and 7 month old daughter Frankie from Fleet to have a textile embroidered portrait of Frankie by former Gillotts student, Harriet Riddell on her sewing machine at Henley Art School in Hart Street.

Jane follows Harriet on Instagram and booked a portrait session especially. She also decided that to make the portrait even more realistic she allowed Harriet to cut a piece of material off the leg of Frankie’s dungarees she had made to sew it into the portrait.

Joining Harriet at Henley Art School (HAS) was ceramist, Hannah Wilson, illustrator and owner of HAS, Jo Harris, illustrator Lilly Rossiter and jeweller Diana Estornel.  Jo commented, “It’s been a lot quieter this year for us.  We’re competing with lots of other events this weekend.  I’m sure after the event, there will be further discussions on whether this weekend is the right one.”

At Singers Lane studios the artists there said that they had a really good year with a steady flow of visitors all weekend.  Kirsten Jones who was one of the co-founders of the Art Trail 14 years ago was pleased to return after few years of not exhibiting.  Kirsten was selling her pictures along with crafts and other pictures by 25 other artists from the Stemtation workshop with the help of Alison Lynch who makes cushions.  Kirsten said, “It’s great to see that the HAT is still going and going from strength to strength after all these years.  I sold my first piece ‘Henley Flowers’ in the first hour (see photo above with buyer Steve Sidders).  It’s inspired by Henley-on-Thames with an ordnance survey map as the wrapping paper for the flowers showing the names of local towns and villages.”

Camilla Dowse, was showcasing her work from her Singers Lane studio.  She said, “I’ve had a steady flow too with lots of interest in my new limited edition Henley prints and we were delighted to welcome Prime Minster, Theresa May over the weekend who knows my work already from when I exhibited in London.”

Margaret Wainwright hosted her own venue in her courtyard garden off West Street for the first time.  Margaret makes beautiful contemporary ceramics and wood sculptures inspired by ancient rocky outcrops in Charnwood Forest.  Her sculptural bowls and pottery look great in both home and garden.  Margaret said, “I moved from Nottingham to Henley 3 years ago and 18 months ago I held an exhibition at the Old Fire Station gallery which was really successful and encouraged me to do this.  Everyone has enjoyed the outdoor space as it is very different to other venues and I’ve met some delightful people over the weekend.”

Improvements in Procedures Needed at Chiltern Centre After Ofsted Inspectio...
Scroll to top