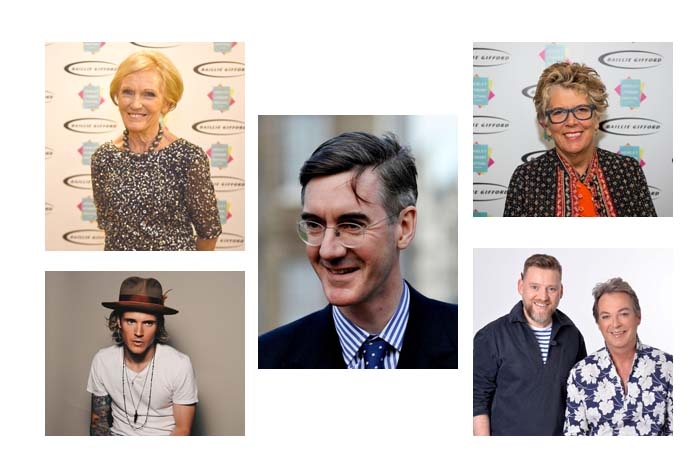 Variety is the spice of life at Henley Literary Festival, which today announces its initial star-studded line-up of authors who will be appearing at their 13th event from September 28 – 6 October.

Where else but Henley would you get Julian Clary, Mary Berry and Jacob Rees-Mogg on the same bill? Multi-talented comedian, entertainer and novelist, Julian, comes to town with his latest children’s book the fifth instalment of The Bolds. Mary Berry comes with her Quick Cooking recipe book. While Jacob, MP for North East Somerset, will be talking about his book on The Victorians – Twelve Titans who Forged Britain.

Now just add to our recipe for success two other culinary queens: Nadiya Hussain and Prue Leith. In Finding My Voice Nadiya reflects on the different roles she has played in her fascinating life: daughter, mother, Muslim – while Bake Off judge Prue delights us with My All-Time Favourite Recipes.

The names keep on coming with award-winning novelist Kate Atkinson who will talk about Jackson Brodie, her private investigator hero of her latest bestseller Big Sky. And One Day author David Nicholls returns to Henley with his new book Sweet Sorrow, about teenage first love…a book destined for the top of the bestseller lists.

Comedian Dom Joly takes a journey back to the country of his birth in his eccentrically titled The Hezbollah Hiking Club: A Short Walk Across Lebanon, in what should be a festival highlight. While Dom makes his festival debut Victoria Hislop returns to Henley along with Max Hastings and Melvyn Bragg.

Two other returnees are Antonia Fraser and Terry Waite. Lady Antonia is one of our leading historians and always a fascinating talker. This year her subject is the fight for rights by Roman Catholics leading to the Emancipation Bill, a vividly colourful period in British history. Terry returns with an evocative look back at his time accompanying the Archbishop of Canterbury around the world, a true festival favourite. Add in other festival favourites Bryony Gordon and Laura Bates and it is a truly heady mix.

Bryony could well find herself heading to hear Sarah Turner and Matt Coyne. Two people who understand the wonders, perils, joys and heartbreaks of parenting so their event is bound to be popular with those with young children. Sarah has found an army of followers as the Unmumsy Mum while Matt gives hope to all fathers with Man vs Baby which has now spawned the superb Man vs Toddler.

Children are always an important part of the festival and this year we welcome some of the leading names in writing for the readers of the future. The lovely Michael Rosen sees the return of Uncle Gobb in a new book from the former Children’s Laureate. Another former laureate in the shape of Chris Riddell with the first book in his Cloud Horse Chronicles – Guardians of Magic.

And there is the chance to meet acclaimed children’s picture book maker Sophy Henn – who hosts two events, one about dinosaurs, the other featuring her latest character Bad Nana. Sophy has also managed to find time to design the literary festival’s programme cover which will be out in July.

A pop star who has turned to writing, former McFly bassist Dougie Poynter has written a book to get young people on the environmental trail – Plastic Sucks! You can make a Difference on how we can all help reduce the plastic plague. As part of the Festival’s partnership with London Library, we are delighted to welcome a musical legend in their President Sir Tim Rice to a special event where he will talk about his life with words and books and those rather well known lyrics he wrote for countless hit musicals.

Faces from our television screens come in the shape of John Craven and Kirsty Wark. There has hardly been a time when John hasn’t been a TV regular and the Countryfile and Newsround presenter will have tales aplenty in his memoir. The multi-talented Kirsty, has written another novel, The House by the Loch, in between her career as one of our best television presenters and interviewers.

Sport is represented by former England cricketers Derek Pringle and Vic Marks who are certain to charm with their engaging tales Pushing the Boundaries: Cricket in the Eighties and Original Spin: Misadventures in Cricket. There are events to make us wonder at the resilience of the human spirit.

Dame Stephanie Shirley whose autobiography Let It Go is being republished ahead of a film about her journey from Kindertransport refugee to multi millionaire benefactor. Steph Booth was married to the Till Death Us Do Part actor Tony Booth, the father of Cherie Blair, in an emotional memoir she tells of living with her husband’s Alzheimer’s for over 13 years until his death.

And that’s just the start of it with dozens more names to come. Events director Harriet Reed-Ryan said: ‘I am thrilled that we have got such a varied line-up that represents all ages and backgrounds. With 170 events there truly will be something for everyone. We are also lucky enough to have the same wonderful venues that we had last year: Phyllis Court, the Town Hall and The Hibernia among others. Since Phyllis Court returned as a venue it has proved extremely popular with our audiences and means that all our venues are within walking distance of each other. Our Festival Hub will return to the town square offering an ideal place to meet people, enjoy children’s events and enjoy a coffee or even something stronger as Laithwaite’s will be there all week. But none of this would be possible without generous support and our wonderful headline sponsor Baillie Gifford who have just signed up to back us for another three years. We are delighted and I think our programme this year is the best since they joined us. We also welcome back Porsche as a sponsor, providing visiting authors the thrill of arriving at their venue in that most enviable of cars.”