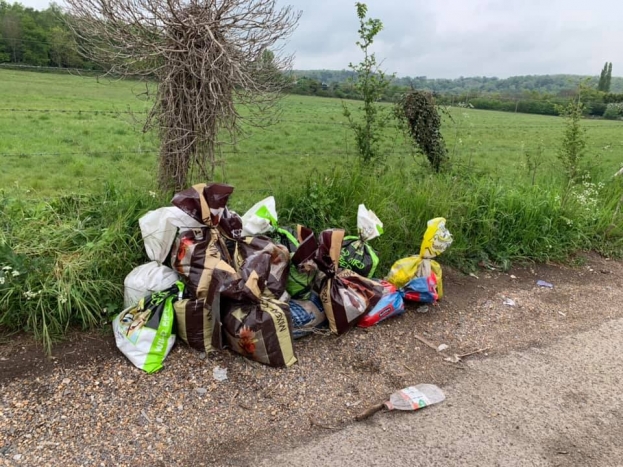 There have been an increasing number of fly-tipping incidents around Henley over the last few months.

The last case (photo above) was seen on the unnamed road on 3 May which joins Reading Road with Harpsden Road (above).  This photo was taken by Emma Jane Taylor who said on Facebook “This is just not good community spirit? Although those doing this have no good spirit. I hate to judge but I can’t help but question anyone who thinks this is OK?! And look at the beauty surrounding the rubbish.”

A friend replied, “That’s the second dump on that slip road on to the Reading Road in the last week. The first was a load of twigs and small branches in black plastic sacks. The plastic sacks have now largely disintegrated and the twigs are getting less.  I suspect the birds are helping! This second lot is a real mess.”

On the 26 April Mark Williams posted on Facebook about incidents in the area over last couple of nights.  Many full black bin liner bags tossed into the verge on the B480, half way between Stonor & Middle Assendon (Henley-bound direction) and another significant dump of same full bags of domestic refuse in the lane up from Russell’s Water up to the B481 (Nettlebed – Watlington Road).

In November last year, following a successful prosecution by South Oxfordshire District Council, a Henley woman pleaded guilty to not ensuring her waste was disposed of in the correct way after her details were found in rubbish bags dumped on land at Dorchester-on-Thames. Melissa Brown, 26, of Crisp Road, Henley, pleaded guilty at Oxford Magistrates’ Court on 6 November to a charge of failing in her duty of care under Section 34 of the Environmental Protection Act 1990 (not ensuring her waste was disposed of correctly).

Please do not remove anything from the fly-tip site.  It is vital that all the evidence is left at the site for council officers to investigate.  If any evidence is removed, it could damage any potential prosecution case taken by the council.