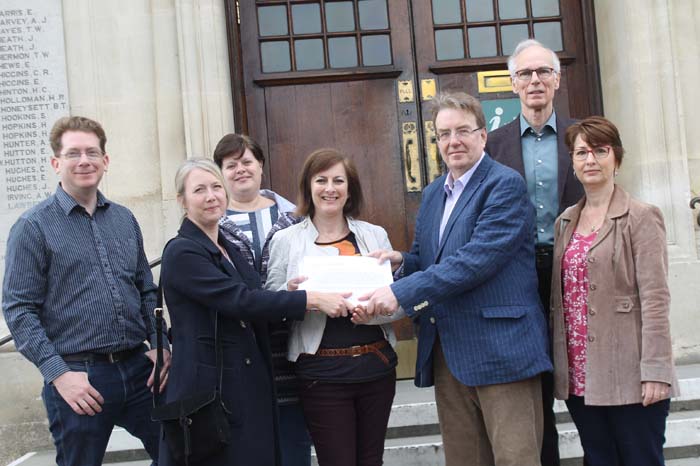 Councillor Michelle Thomas and Louise Pegley Ilett who are behind the Henley Schools Funding campaign handed over the schools funding petition to John Howell MP on Saturday outside the town hall. The petition has been signed by just over 900 people and will be presented in Parliament this week.

The Petition of petitioners of residents of Henley on Thames, Oxfordshire

Declare that in relation to school funding the Department for Education and the Treasury conduct a review of the following: in advance of the Comprehensive Spending Review, of how funding increases will be made in relation to schools in the Henley constituency in real terms beyond the amounts already being spent on schools; further, of how to eliminate the gap between the best and lowest funded schools in the constituency; further, to ensure that the Basic Entitlement forms an appropriate percentage of the National Funding Formula used locally; further, to ensure that small primary schools in the constituency remain integral to their communities; further, to review areas of inflationary pressures and situations where schools provide additional services such as social care, or deal with criminal behaviour to examine the real costs of providing education, and, further, to assess the extent and access to capital funding.

Michelle said, “I’ve been really really pleased with the amount of signatures we’ve got.  We’ve been very challenged with a very short amount of time (2 weeks) that we’ve had.  We couldn’t really get started until the end of the election and then it took a while for the schools to actually share the petition with the parents.  To get everyone in Henley, whether you are parent or not, to really get on board with the message that schools are desperately in need of money and they have been very supportive.  The time that Louise and I have spent in the town centre has been very well supported by people passing by who live in Henley who are very concerned.”

What did people comment most about what is being under funded in schools? Louise replied, “It’s really across the board.  Obviously capital funding has been massively affected when you look at an 80% difference for example at Gillotts which has gone down from £80,000 £18,000 the buildings really need some love and attention.  People who have been at that school back in the 80s and 90s and have commented it is no different – it looks exactly the same.  It is also about retaining teachers.  Recruiting of teaching staff is really tough as we live in a really expensive area so we need to make sure we are paying them properly.  We haven’t given them a pay rise for ages.  It goes across the board – resources, recruitment and buildings.”

Michelle and Louise have a provisional date for the campaign march of Saturday 8 June in the afternoon.  The time and route will be confirmed.  Michelle added, “This is not just for Henley schools, we’re inviting as many schools in the constituency to get involved.”