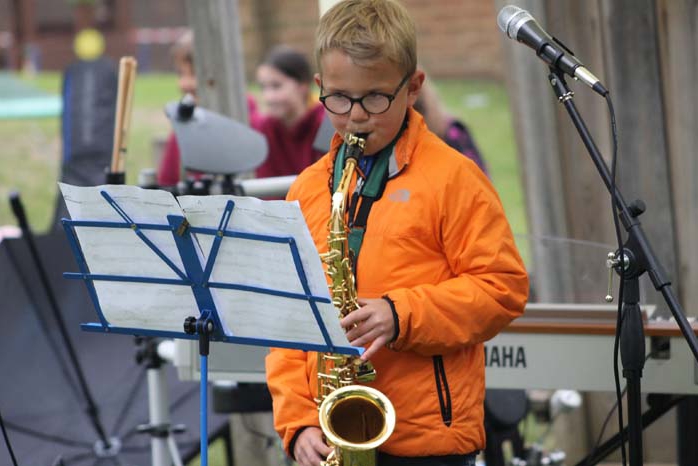 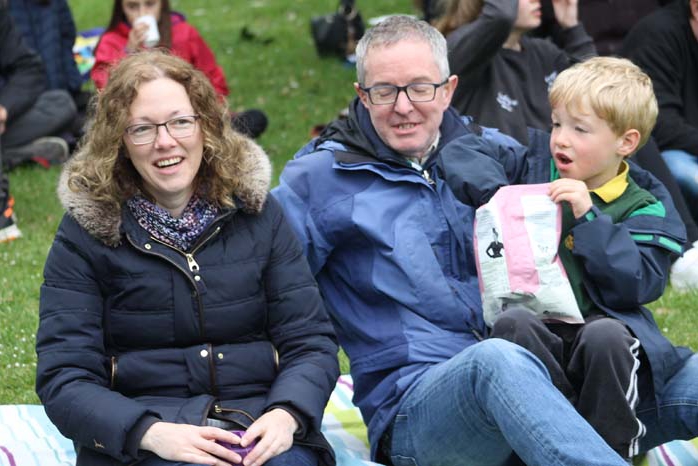 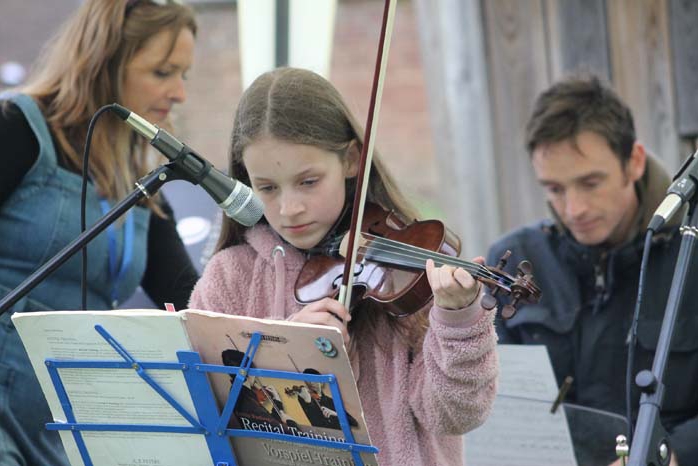 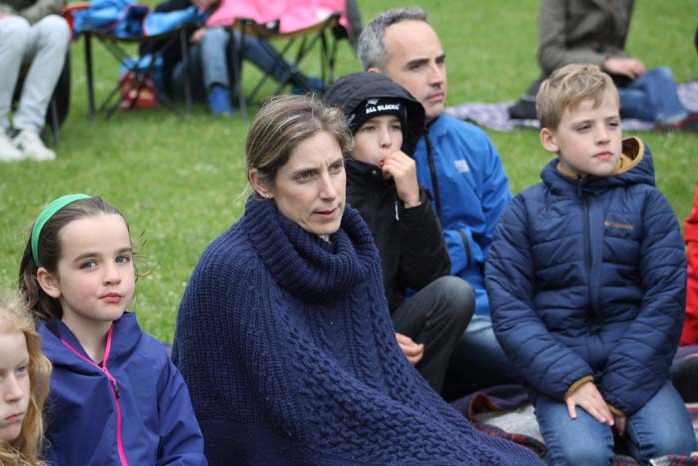 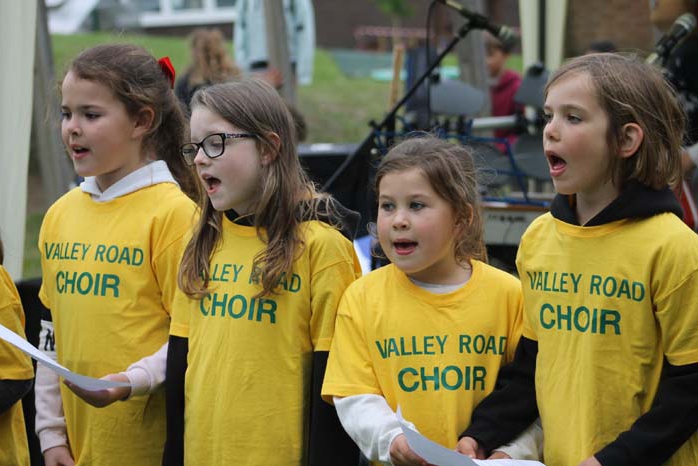 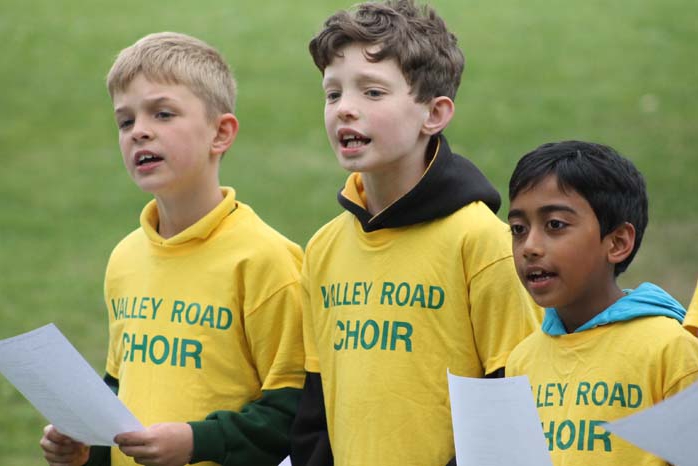 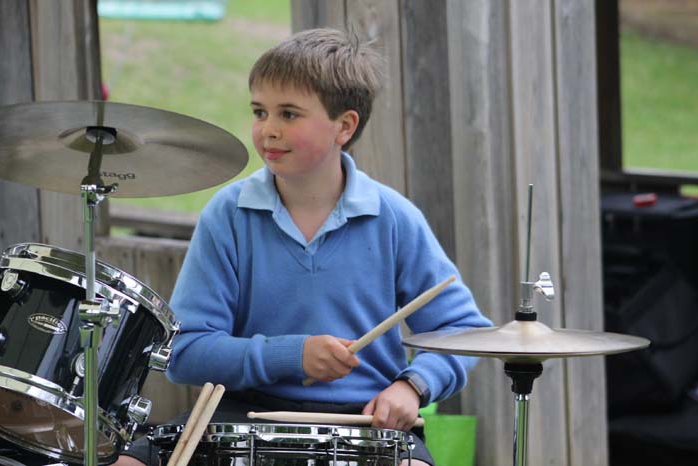 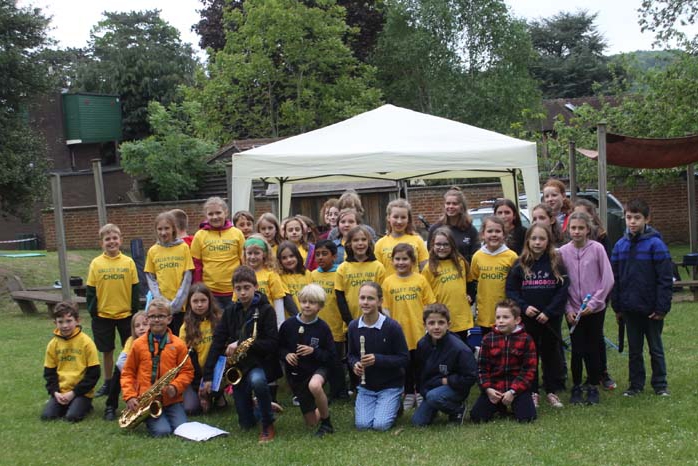 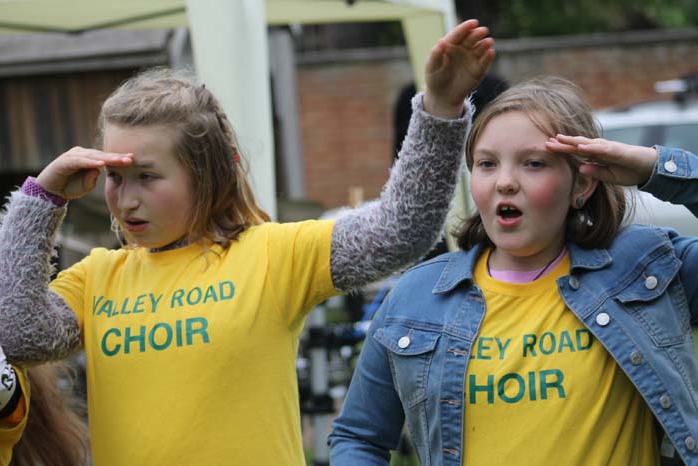 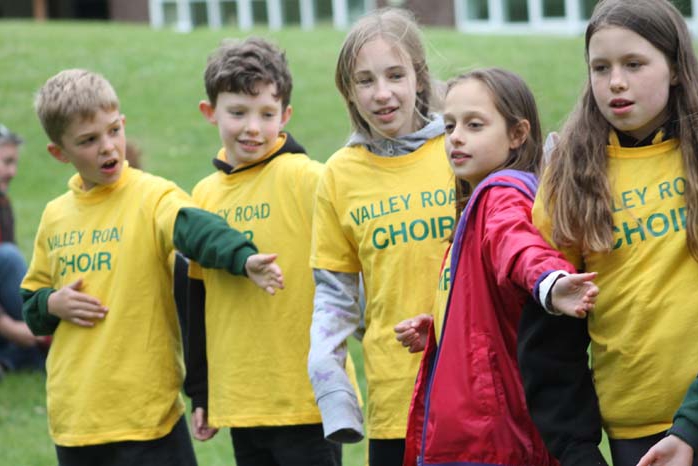 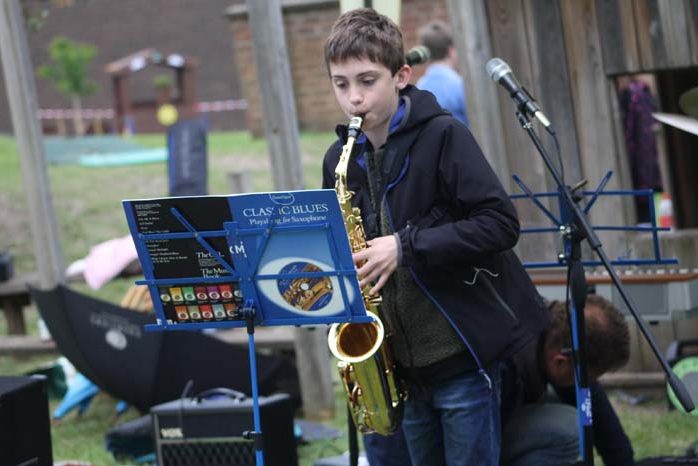 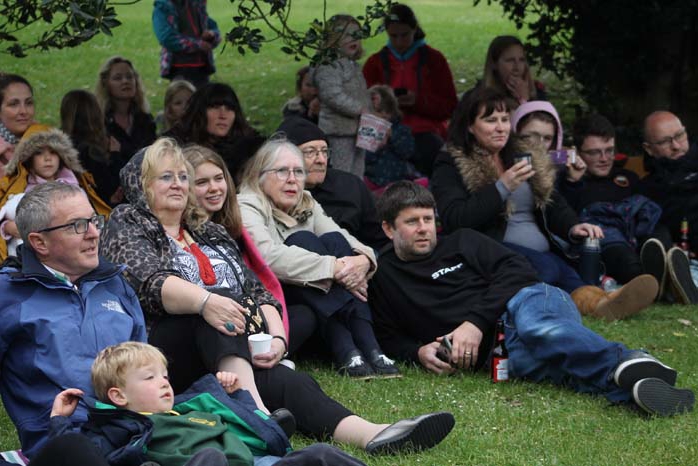 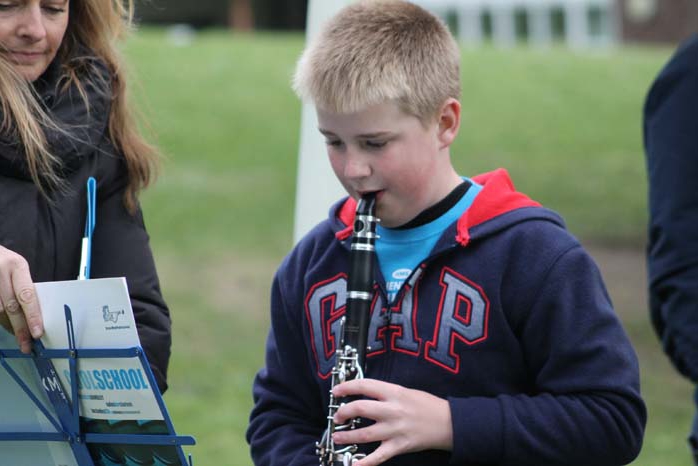 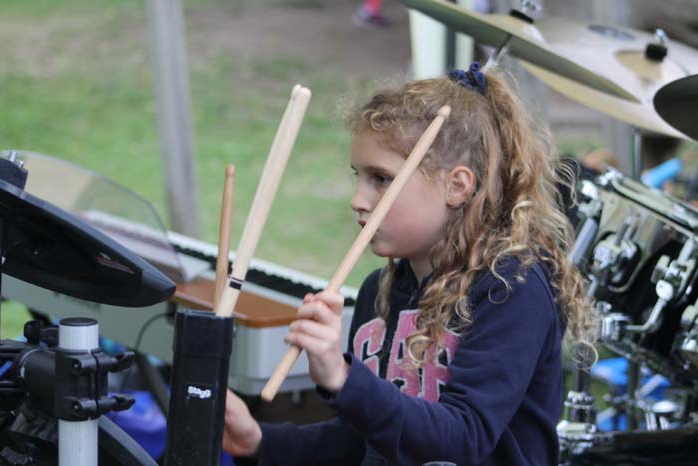 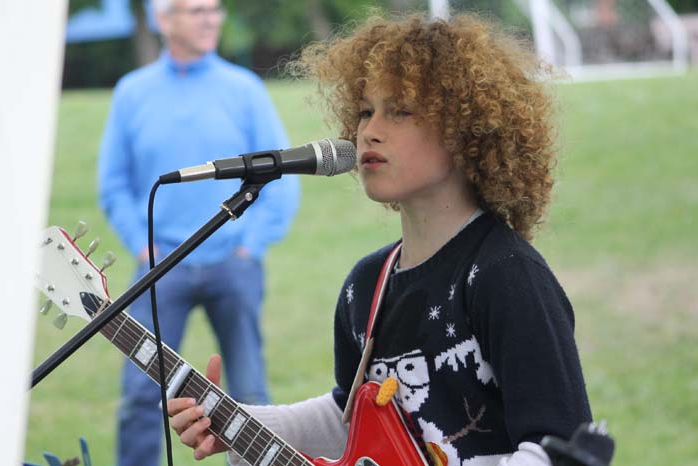 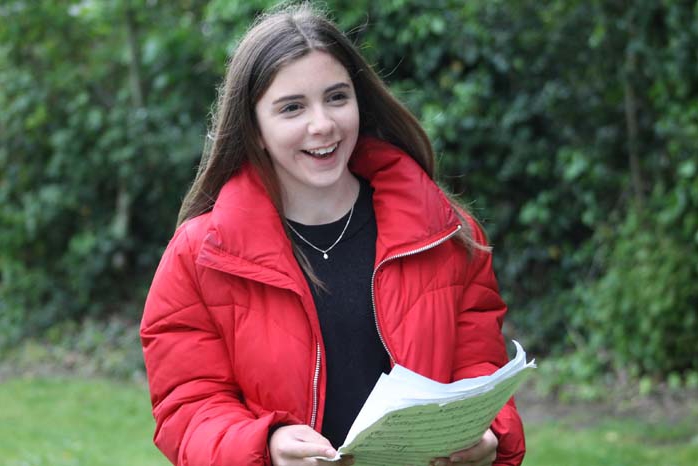 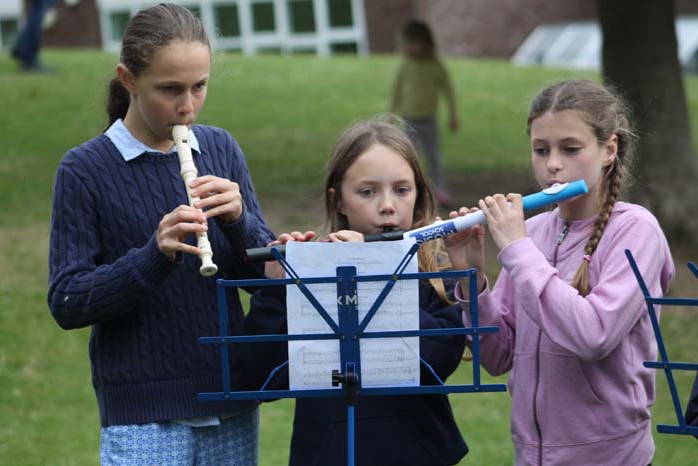 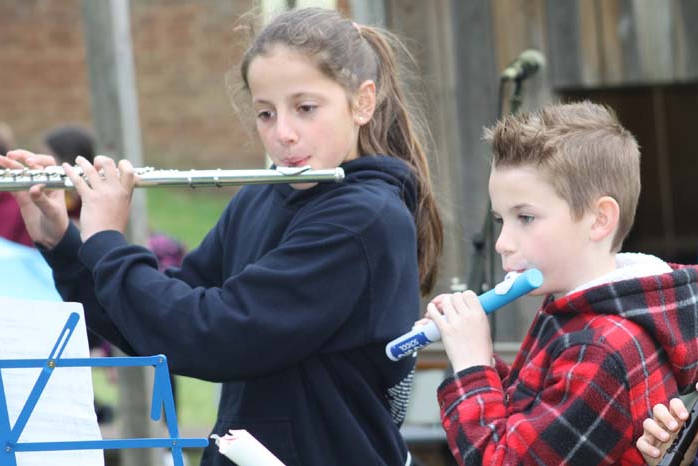 Music warmed up the cold atmosphere on Friday evening at the first Henley Schools Together Festival organised by Henley Music School with around 50 local children performing on the top field at Trinity School.

The idea for the event came after the local school choirs came together for Carols with a Heart for Henley in December last year.

Beatrice Fraser, aged 12 from Gillotts School playing the violin opened the show playing the first movement from Concerto No 5 by F Seitz.  Beatrice joined Henley Music School 3 years ago and was accompanied by her Dad on keyboard.  Afterwards Beatrice said, “I volunteered to go first as my Dad wanted to have a beer after playing!”

Singing performances included Naia Charmin-Vasquez, a Year 9 student also from Gillotts who sang Somewhere Over the Rainbow.  Naia said, “I’ve been singing since I was 7/8 around the house.  I started singing seriously when I joined the Gillotts Choir in Year 7.  The song I’m singing is higher than my singing teacher says I should.  It is grade 4 and I’m on grade 3.” Valley Road Choir performed Naughty from Matilda the Musical and the cute action packed Do Re Mi from the Sound of Music.

Other great instrumental performances included Ewan Vam-Duijn who played the Queen classic, Bohemian Rhapsody on saxophone, Oisin Elliott who plays two instruments performed Hit the Road Jack on the saxophone followed by the James Bond theme tune on the flute.  Jan Karpowitz played No Problem on the clarinet and Felix Richardson played the guitar with Oscar Scannell on the drums performing Smells Like Teen Spirit before then playing The Sunday Driver with his sister Didi on the drums.

The event was kindly sponsored by The Head Partnership solicitors who provided free drink for the bar.

Principal of Henley Music School Laura Reineke said, “I was so pleased that 50 lovely young people signed themselves up to perform on Trinity’s top field.  Despite the cold weather we all had a lovely evening.  I was so impressed with them all, and it is great to hear the progression in their playing/singing. This event allowed them to see that there are so many children from all the different schools who love playing music too.  We had young people from Badgemore, Valley Road (including their choir!), Sacred Heart, Trinity, St Mary’s, and Gillotts.  Huge thanks goes to The Head Partnership who sponsored the bar – so this was a truly free event, which fit’s with our Henley Music School ethos of offering all forms of music education regardless of age, ability, background or means.”