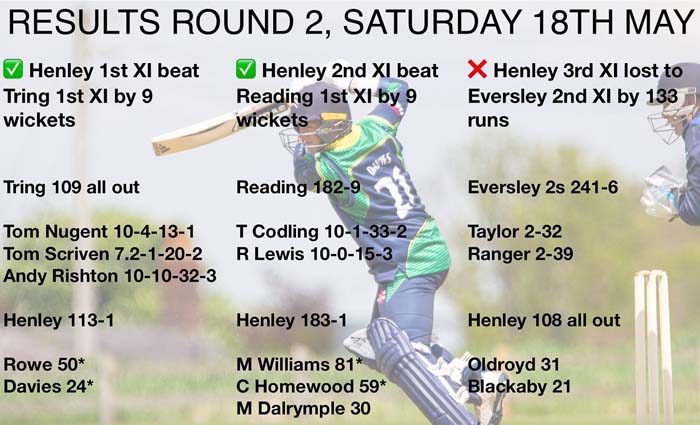 Tring Park are still searching for their first win of the season as Henley First XI dominated in every department at the Breakspear Ground on Saturday on their way to a nine wicket victory which accurately reflected the performance gulf between the two sides.

Winning the toss on a rather overcast and clammy morning, Henley skipper Michael Roberts unsurprisingly opted to field. That it took until the twenty second over for Tring to score 50 runs was reflective of the pressure that the Henley bowlers placed on the Tring batsmen allied by a level of fielding that was night and day better than at Aston Rowant the previous weekend and must have made the Tring batsmen wonder if they were playing a side with twice the number of permitted fielders.

Seam and pace from Tom Nugent and Tom Scriven, allied to movement through the air and off the pitch, had the Tring batsmen hopping about and serially playing and missing. So, it was no surprise when Nugent sent Macdonell’s off stump cartwheeling in the fifth over and Scriven had the dangerous Woodland caught behind just three overs later.

Andrew Rishton, replacing Nugent from the Pavilion End and spin from Ali Raja offered no respite to the batsmen. Scoreboard pressure saw Payne run out thanks to a brilliant assist from Tom Scriven at backward point and Rishton soon followed that up by removing opener Clark’s middle stump. When Raja bowled Grinham, Tring were in real trouble at 43-5 and the writing was on the wall.

Tring skipper Shelvin Gumbs tried to add some momentum to the innings but only succeeded in being caught behind by Jack Davies off Rishton, a fate that had befallen Criddle in Rishton’s previous over. With half the innings left to bat out, Bassi and Harris opted for sensible accumulation over adventure which worked for a little while until Bassi miscued a sweep into the waiting hands of Rishton at wide fly slip off spinner Euan Brock. Weymes went for a run that was never there only to be ordered back without success and was rather comically run out, occupying the same crease as Harris. Finally, the evergreen Stanway could only add a single run before nicking off to Roberts at second slip off the returning Scriven.

And that was that in 38.3 overs, Tring all out for 109 thanks some excellent work into field and some very miserly bowling, no one more so than Nugent whose 10 overs went for just 13 runs.

In response, Henley made light work of chasing down the target. Roberts and fellow opener Matt Rowe were lively and aggressive from the start and 50 came up in just six overs as both openers found the boundary and beyond with ease. Only Woodland had the satisfaction of taking a Henley wicket, having Roberts caught behind. But Jack Davies, every aspect of whose game is burgeoning as a young professional at Middlesex CCC, was immediately on the money with a stylish 24 off 16 balls including 5 fours before Rowe brought up his half century and put Tring out of their misery with an emphatic boundary. It all took just 13.1 overs.

Unsurprisingly, Henley captain Roberts was extremely impressed with the performance, stating: “The most satisfying part of the performance was the improvement in the areas we underperformed in the previous week against Rowant. Our skills and energy in the field were on point, which went a long way to support what was a first-class level bowling display. We have set a challenging precedence for ourselves going forward, but one the lads are certainly up for matching.” On next week’s fixture against Banbury, Roberts said: “we have always found the game away at Banbury a tough one, and so we’ll need to put in a clinical performance to get a result.”