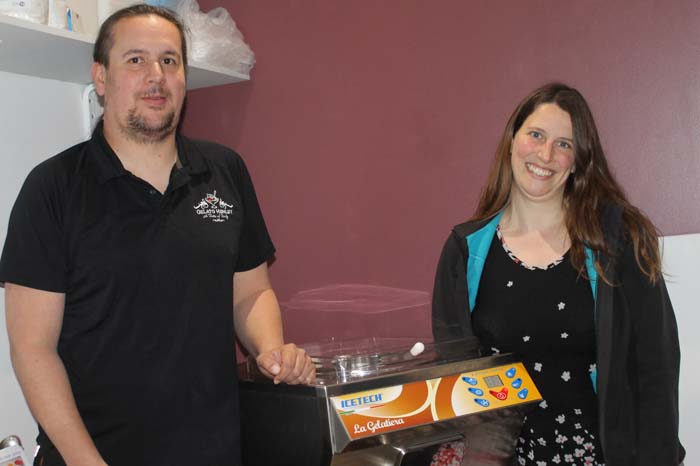 Starting from their kitchen at home 6 years ago, Ryan Barlow and his partner Katrina Minoletti have created Gelato Henley, a range of delicious ice creams made using an authentic Italian recipe.

The business is now making a wide range of ice creams including hazelnut, toffee popcorn, raspberry cheesecake, honeycomb, salted caramel, coffee, lemon and raspberry sorbets as well as the traditional vanilla and chocolate flavours from a unit at Henley Self Storage on Newtown Estate.  All the ingredients are homemade including the biscuits for the raspberry cheesecake flavour.  Katrina said, “We couldn’t find a biscuit to buy that didn’t contain palm oil, so I make our own.”All the sorbets are made with fresh fruit and the honeycomb flavour is made by me with Honeys from Henley.”

Ryan said, “We used to visit Katrina’s family every year in Italy and have always loved the gelato ice cream there. The difference between their ice cream and what is sold here is amazing and we wanted to bring a bit of that back here.  As well as the taste, gelato is less fattening as it has a lower percentage cream content and less sugar and the creamy texture and the fuller flavours are created as gelato is churned at a much slower pace.” 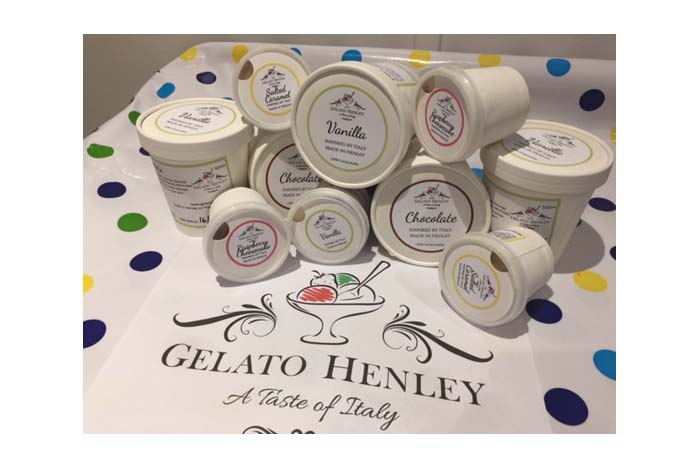 after she had sadly passed away.  Ryan commented, “There are so many wonderful businesses that have set up business here and it’s amazing how easily a food safe kitchen could be set up. Darren has been really supportive and he’s created a real business community here.”

At the moment Ryan is running the business around another job but hopes to do give this up soon as the company gets busier.  Gelato Henley is currently available at The Angel on the Bridge, Spoon Deli in Duke Street, Menza café at the Rugby Club, the ice cream kiosk on Thameside, The Herb Farm (Sonning Common) and Shiplake Village Shop.  They have also partnered with Hobbs of Henley to create a gin and tonic sorbet for their summer gin cruises and it’s stocked at the kiosk nearest Hobbs.

Always keen to taste anything sweet, I was certainly in heaven!  My favourites were the raspberry cheesecake and honeycomb.

Plans for the future? Ryan replied, “Long term our dream would be to open a pop up ice cream parlour in Henley and we’d love to go mobile, with events and parties. And this year we’re working on a vegan range.”

Gelato Henley is also available to order in 900ml tubs via the website at www.gelatohenley.co.uk  for £10 and/or can be bought every Friday from 2pm-5.30pm from the unit at Henley Self Storage.   They will also be having a stall at the Big Feast eat! Henley Food Festival on Saturday 15 June. 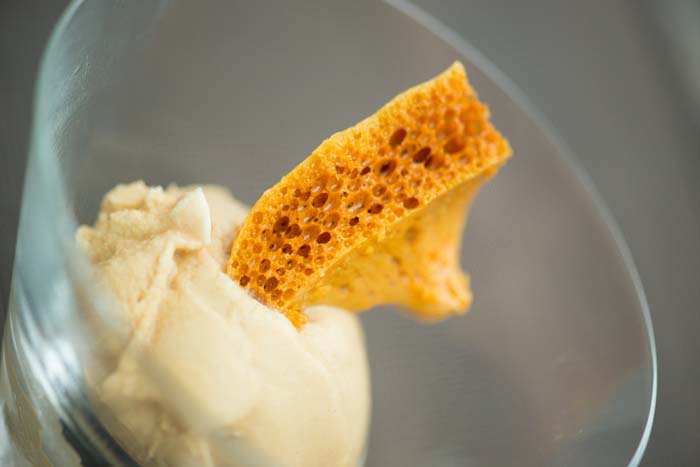