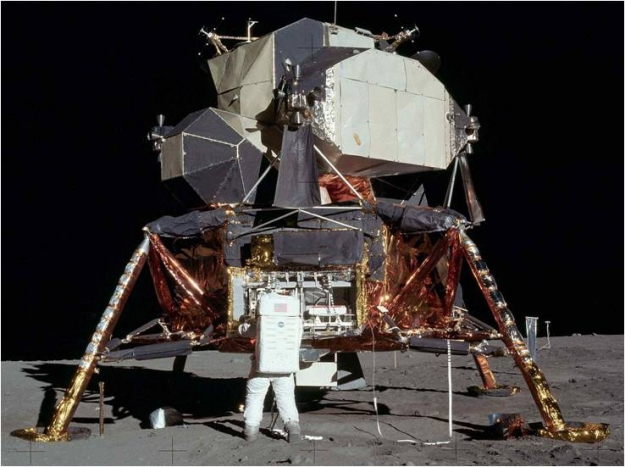 To mark the 50th anniversary of Neil Armstrong and Buzz Aldrin landing on the moon, the community of Henley-on-Thames and visitors are invited to a free audio-visual NASA space show on Saturday 20 July in Market Place in front of the town hall.

The NASA film and sound archives have been researched to compile a vibrant programme reliving the the origins of the space race in the Cold War, the ground-shaking launch of the first voyage of mankind into deep space, the edge-of-seat moments when Apollo 11 came close to aborting the moon landing, the first steps of mankind on another celestial body plus what really happened inside the lunar module to rescue the stricken Apollo 13 and live video from the lunar surface of the astronauts of Apollo 17 discovering the moon rocks that have answered the question how the moon was formed and life on earth began.

The narrator for the evening is Dr Michael Warner, a Henley resident and collector of rare Apollo mission historic artefacts.  He will be accompanied by special guest Dr David Baker, a British space scientist present at NASA Mission Control during the Moon landings and a member of the NASA team who improvised emergency procedures to rescue the crew of Apollo 13.

Dr Warner said, “We are excited by the way this event has rapidly come together, with enthusiastic support from the Town Council and Headteacher and science teachers from Gillotts school.  We are privileged that Dr David Baker, a British scientist who worked at Mission Control during the Apollo era, will be joining us.  He will provide commentary throughout the evening on what the moon landings were really like at the time as viewed from a seat in Mission Control. We’ve hired a giant LED screen and powerful sound system and are inviting Henley families and visitors to bring along their own chairs and settle in to Market Place for an evening of spectacular space imagery, compiled from NASA and American TV archive footage of the missions to the moon.   To set the event running, music will be played from 2001 Space Odyssey and Holst’s ‘The Planets.”

The Gillotts School ‘Moon Lander’ science prize will be awarded by Dr Baker at exactly 9:17pm – the winning team presented with a page from a checklist that landed on the moon inside the Apollo 17 lunar module.  Catharine Darnton, Headteacher at Gillotts school, “We are very exciting about celebrating the anniversary of the moon landing – we think it will be a great event.  We are very grateful that donations are being given in support of the school – such support from the community is hugely valued.  However there is no doubt that it is the competition prize that is generating the most excitement! How inspiring.“

Dr Gillian Omar, the science teacher at Gillotts School running the competition commented “Our students are looking forward to the challenge of applying their science lessons to the real life challenge of developing a new moon lander that will not only survive the journey into space and land on the moon, but will be able to protect the astronauts on their journey.”

The event is the initiative of Michael Warner and co-ordinated by the Town Council.  Participation for Henley residents and visitors is free of charge.  Voluntary donations will be collected at the event in support of Gillotts School.  Food and beverages will be available from the pubs, cafes and restaurants that surround Market  Place.

How Employment Changes Can Affect Your Pension
Scroll to top