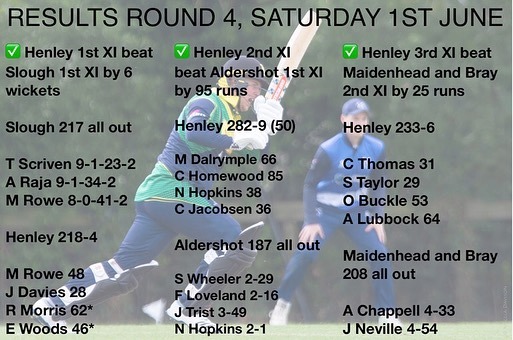 By dint of a workmanlike performance, Henley chalked up win number four over a Slough side which played a significant part in producing a game which was both entertaining and absorbing. The win leaves Henley joint top of the League with Datchet.

Over the close season, Slough have undergone something of a metamorphosis and a much-changed side, at full strength for the first time in 2019, won the toss and decided to bat on the first day of summer with weather to match. As last week, so this, Tom Nugent initially struggled with his line and run up, but nonetheless struck early to have Avas caught down the legside. Shah was not long in following his fellow opener back to the Pavilion when a second consecutive skyer was caught by Euan Woods off Tom Scriven.

But that was it for a while as Saif Zaib, Northants’ talented young left-hander and Poreddy, Slough’s 20-year-old overseas who has already played first class cricket in India, asserted themselves to bring solidity to the innings and keep the score ticking along nicely. It took a rash hoike from Poreddy to remove him, bowled by Ali Raja, who combined well with Woods to apply the brakes to a pretty impressive run rate over the first 15 overs.

But Zaib now combined well with Kakani and, looking wholly untroubled, the pair put on 81 for the fourth wicket until Zaib was undone trying to smash Matt Rowe over the long off boundary only to be caught there by Andrew Rishton for an impressive 81 that could have been a lot more, the score now 159-4 in the 31st over. 21 runs later, Kakani slogged one up in the air to mid-on for a regulation catch to make it 180-5.

With Slough’s bigger guns now gone, life became a bit easier for the home side and the run rate dropped away as only 40 runs and four wickets came off the last eleven overs to leave Henley needing 218 to win.

Contrasting bowling styles greeted the Henley openers with Nawaz loping in off a few paces whilst Poreddy charged in from distance. Poreddy it was who lured Henley skipper Michael Roberts into a miscued pull shot to make it 4-1. But despite some miserly bowling from Nawaz, Matt Rowe and Jack Davies soon exerted control. Davies would be caught behind off Nawaz when looking set and a short but entertaining innings (19 off 18 balls, 2 fours 1 six) from Scriven enlivened proceedings. Rowe was run out, the author of his own misfortune when another score north of 50 beckoned. But Richard Morris and Woods, whose form with the bat has much improved, were on hand to steer the hosts home with a mix of nudges and glances plus the odd angry shot, the game petering out as a no ball yielded 2 extras to take Henley over the line with 6.2 overs to spare.

Another win in the bank for the defending Champions, but another performance, in the captain’s eyes, which fell short of the potential within the team. “We were clinical with the bat and the skills on display and attitude shown were really impressive. However, we were poor with the ball in the opening quarter of the fixture which will allow perhaps the better teams to get away from us further than Slough did. We’ve got a good challenge to get our teeth into over the next few weeks to get this right. What is really pleasing nonetheless, is our capacity to get the job done and so although the skills might need a little honing, the winning attitude is there.”

Business Advice From the Top Entrepreneurs
Scroll to top