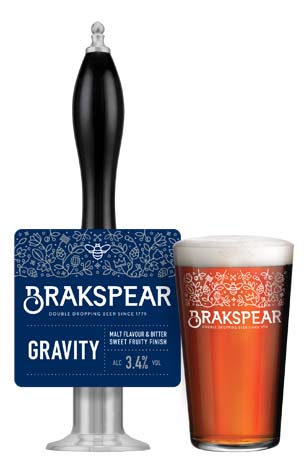 Brakspear Bitter and Oxford Gold popular beers have been a given a new look and new name.

Brakspear Bitter has been renamed Brakspear Gravity, in a reference to the ‘double dropping’ system used to brew the ale, when it flows under gravity from its initial 16 hours of fermentation to another vessel for secondary fermentation. Double dropping creates the clarity in appearance and taste that has made the beer sought-after across Oxfordshire and beyond.

Designs for both Brakspear Gravity and Oxford Gold have been given a dramatic makeover, with a new livery inspired by William Morris, designer, poet and a graduate of Oxford University who lived in Kelmscott Manor in Oxfordshire. The famous Brakspear Bee is still prominent within the new design, which will feature on pump clips, bottle labels, beer mats and more.

Brakspear chief executive Tom Davies said, “We are thrilled with this new look for our beers. Double dropping under gravity is at the heart of what makes Brakspear beers so special, so putting it centre stage on the new design gives us a real point of difference.

“Brakspear beers are a huge part of our business; a pint of well-served Brakspear Gravity or Oxford Gold is one of main reasons why customers choose to drink in our pubs. We’re confident that the new livery will be appreciated by our loyal drinkers, while also appealing to new, younger consumers.”

The new design is being unveiled exclusively in Brakspear pubs this week, with other pubs who sell the beers receiving it later in June. All Brakspear branded items, from beer mats to T-shirts, bottle openers and parasols, will start to feature the new livery over the coming months.

Bradley Ralph, bar manager at the Angel on the Bridge in Henley, said: “This is a really positive move for Brakspear beers. We love the new look, which is fresh and exciting and will attract younger drinkers who are used to the interesting, non-traditional craft beer designs. We expect the new name to create some interest at the bar, and give us an opportunity to talk about the unusual brewing process behind Brakspear Gravity.”

A major consumer awareness campaign promoting the new designs will run over the summer including: a presence at the Stonor Park Food Festival (15-16 June) and Countryfile Live at Blenheim Palace in August, a pop-up bar in the Oxford Visitor Centre (3-7 June) and vouchers distributed via local sightseeing bus companies.