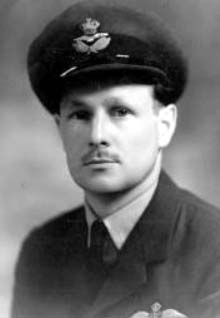 The Henley servicemen who lost their lives in WW2 is the new research project being carried out by Mike & Lesley Willoughby from the Henley Lest We Forget project to mark the 80th anniversary of the start of WW2 this year.

The research will discover the history behind the names of the servicemen listed on Henley memorials along with 40 other men who have previously not been acknowledged.

Mike said, “The aim is to have a presentation ready display on Armistice Day in November this year.  The last name I had trouble identifying on the Henley Town Hall memorial was that of JA Edward who after uncovering his story was truly one of Henley’s unsung heroes.”

JA Edward, according to Mike’s research, was Flight Lieutenant John Andrew Edward DFC (Distinguished Flying Cross) of 617 (Dambusters) Squadron who had completed 24 operational flights flying Lancaster bombers with 50 Squadron before being transferred to 617 Squadron where he flew a further 15 sorties.

Born in Antwerp in 1914, but registered as a British subject, little is known about John’s early life.  However, after leaving Radley College in 1931, John had been articled to Montague Spencer Ell, a chartered accountant on Northfield End, Henley.  He was also a member of Henley Rowing Club, being their captain in 1936 and a committee member until he joined the Royal Artillery at the outbreak of the war in 1939.  He later transferred to the RAFVR eventually ending up as a pilot in 617 Squadron.

Ft Lt Edward was killed when his Lancaster was shot down on 24 June 1944 on a bombing mission to the V2 launch site at Wizernes near St Omer in France. He and four members of his crew were killed and three were taken prisoners of war.

Mike and Lesley visited the graves of John and his crew during a recent trip to Leulingham churchyard in France (photo below).   Mike added, “So much information is coming to light on John, especially from his old school, Radley College.  It is highly likely that as well as general talks on the WW2 project, I hope to develop a talk about John and his crew for the school.”

Do you have a family relative from Henley who lost their lives in the WW2 and have photos or information about them? Mike would be very interested to hear from you and will be available to talk to you personally at his drop-in sessions he is planning to host at Henley library soon. Dates of these and further information can be found at https://www.henley-lestweforget.co.uk/ 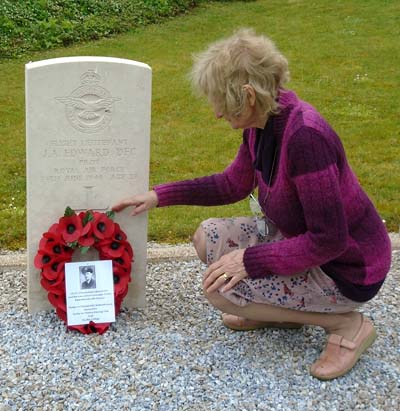 The Henley Herald website provides an up-to-date and unbiased digital news service for
Henley-on-Thames
Entertaining Talk on Behind the Scenes of Bond Films in aid of Chiltern Cen...