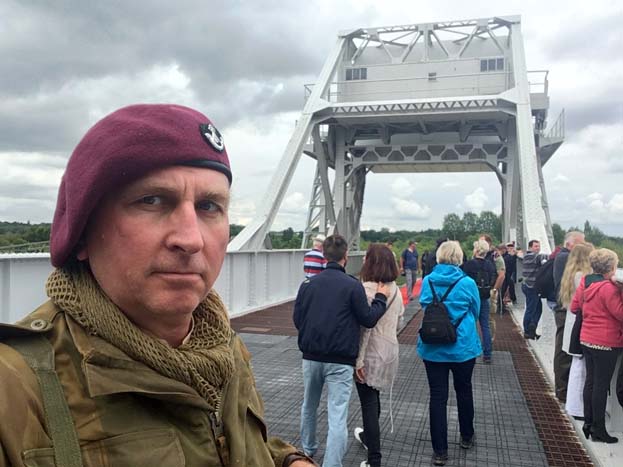 Richard Pinches from Henley marked the 75th anniversary of D-Day last week by joining the memorial celebrations for Operation Overlord (Battle of Normandy) in Normandy with a group of WW2 re-enactors to honour his father who died in 2015.

Richard’s father was Henley veteran, Peter ‘Ginger’ Pinches, who took part in the liberation of France with the Royal Army Service Corps as a lorry driver.  Peter was sent to take part in the European invasion after returning from the successful North African campaign against Rommel in the desert.

Last week the group visited many ceremonies in the Normandy area. Richard said, “There was a large turnout of veterans, who were all in their mid to late 90s, this was probably the last big anniversary they would be able to attend in any great number.”

The WW2 re-enacting group that Richard is a member of pays homage to the 2nd  Battalion Oxfordshire and Buckinghamshire Light Infantry who were part of 6th Airborne Division and who are famous for being the first Allied combatants on French soil with Operation Deadstick in the early hours of the 6th June 1944.

Operation Deadstick was the capture of two bridges over the Caen Canal and Orne River, at Benouville and Ranville where six gliders full of 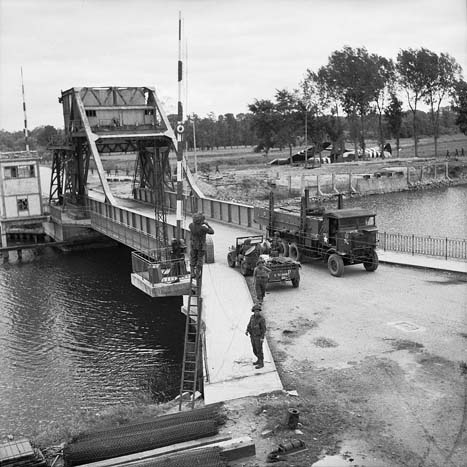 170 soldiers were landed close to the bridges. This operation was crucial to the success of the Allied advance into France.

Peter ‘Ginger’ Pinches, would have driven over Caen Canel bridge (renamed Pegasus bridge after the emblem of the 6th Airborne Division) many times taking supplies from the newly constructed and ingenious Mulberry Harbour into France.  This floating, artificial harbour, operational within 12 days of the landings, was constructed from sections made all around Britain which were then towed to the French coastal town of Arromanches, where they were assembled.  Huge quantities of troops and supplies could then be offloaded without the need to capture an existing sea port.

Richard chose the 2nd Battalion Ox and Bucks, not only because of their heroic actions on D-Day but also because his parents’ farm in Henley, where he converted a cow shed into his film studio in 1988, is on the border of Oxfordshire and Buckinghamshire. His son Ben is also a member and they go to various UK history shows, camping in period style and exhibiting to the public as soldiers of the 2nd Battalion Ox and Bucks.  They even eat tinned rations (mainly bully beef, M and V, meat and vegetables and the nearly inedible hardtack biscuits) that are close replicas of the period equivalents.

As a professional videographer, Richard is now recording veterans’ first hand experiences, having started this process with his own father shortly before he died.  He posts the video onto a YouTube channel he started. He met a few veterans in Normandy and recorded those who were willing. One of the veterans was John Hayes (pictured below) who talked about his experiences as a Sherman DD duplex (Swimming) tank driver with the 4/7th Royal Dragoon Guards, who landed on Gold beach on the 6th June, when he was only 19. His daughter, who was pushing him around in his wheelchair, was stunned and said “I had no idea what he actually did, you’ve got more from him in 10 minutes that we’ve had in decades!”

Richard added, “My father instilled in me a strong appreciation of the war and the sacrifices that were made in those years. The re-enacting group do not glorify war but aim to keep the memory alive of those who served and those who sacrificed their lives for our freedom.” 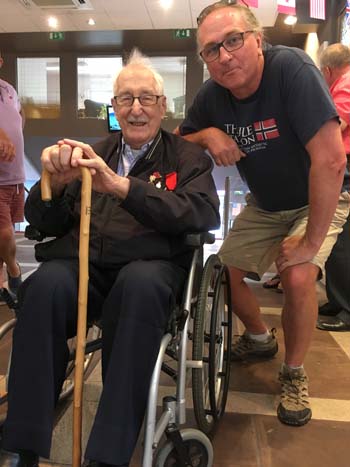