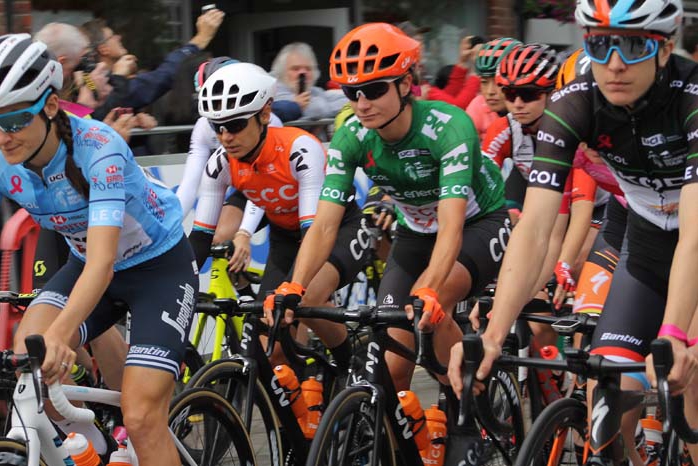 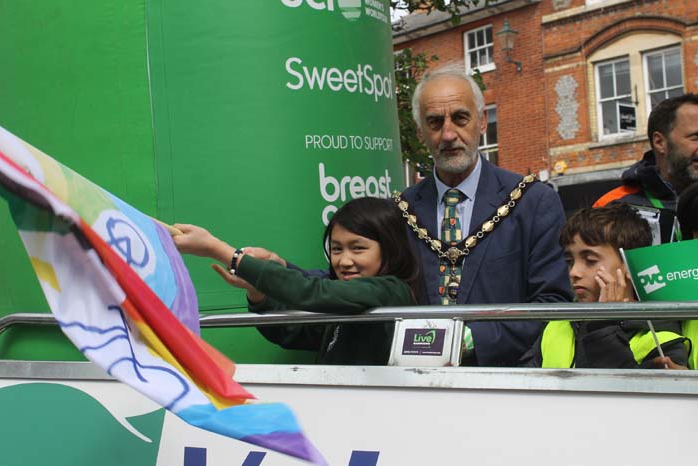 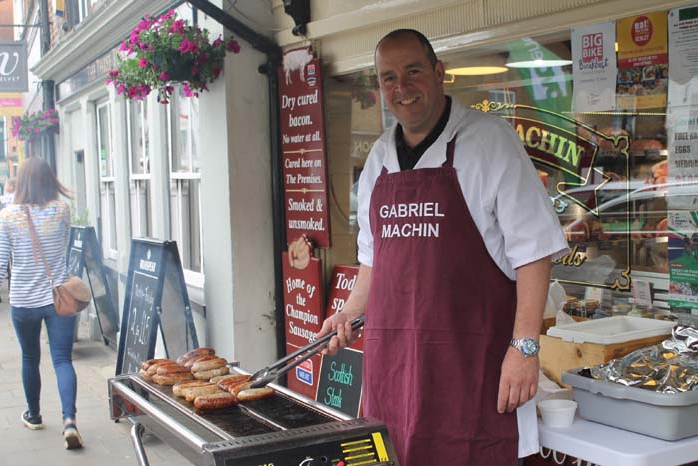 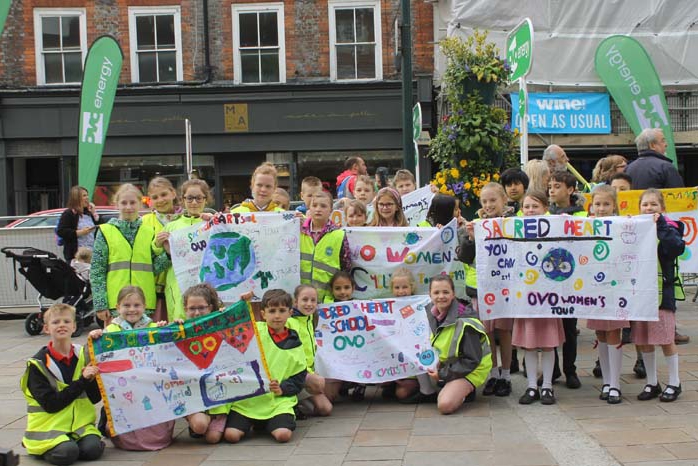 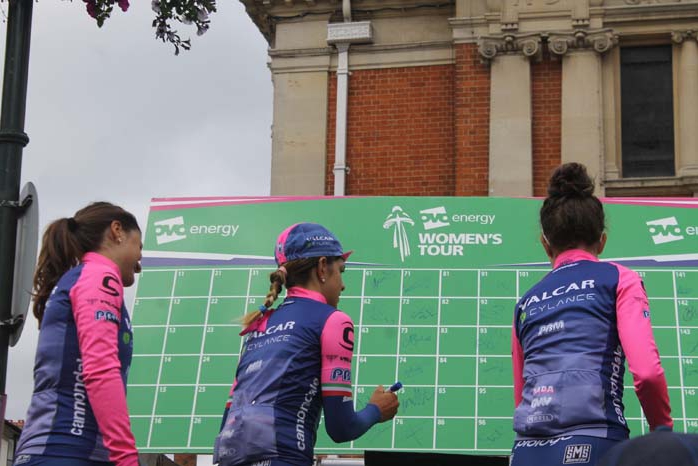 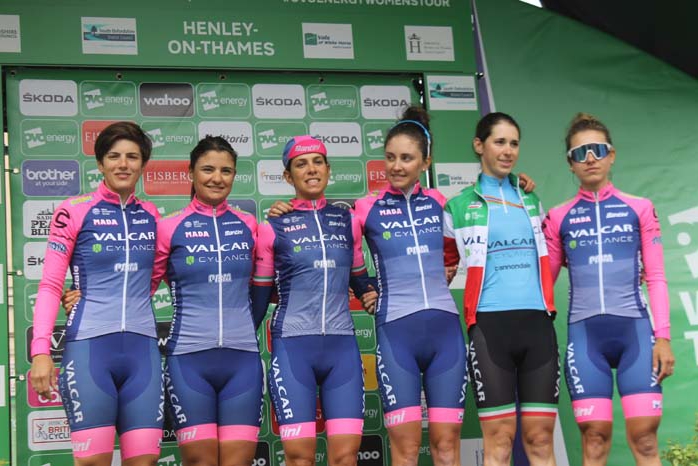 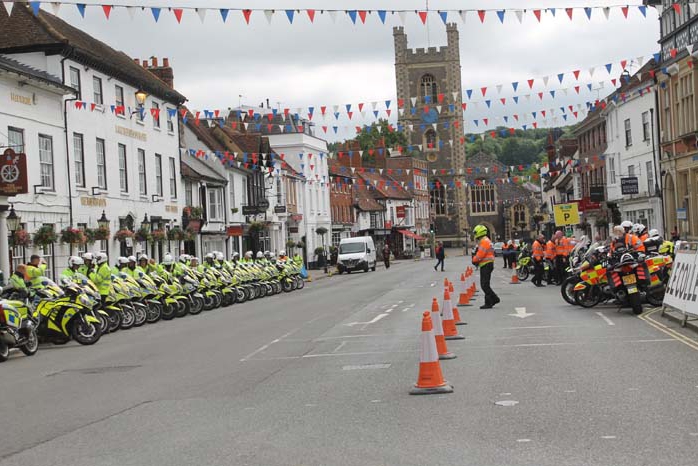 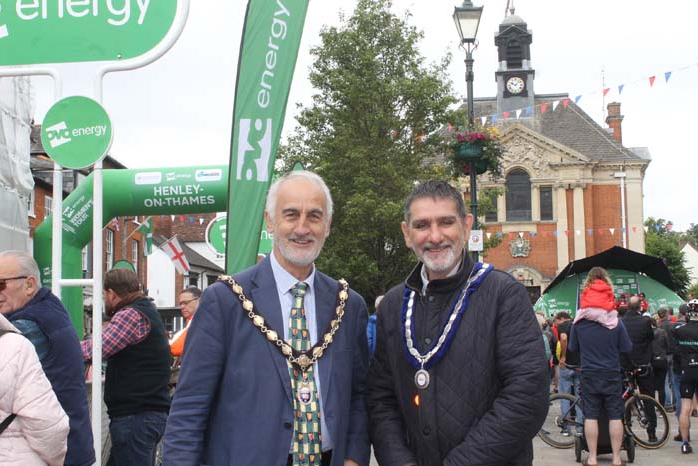 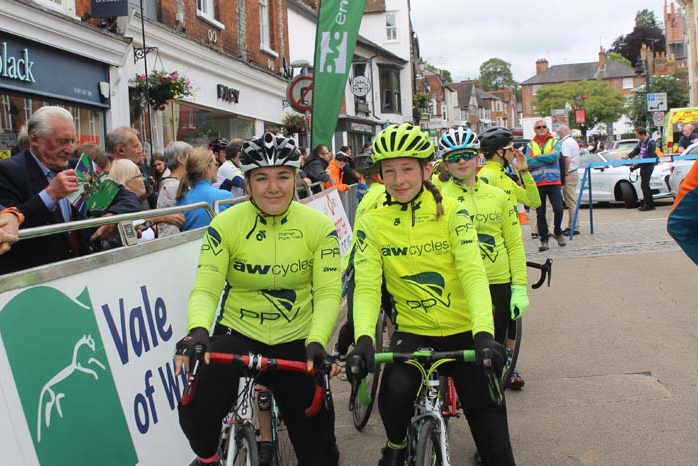 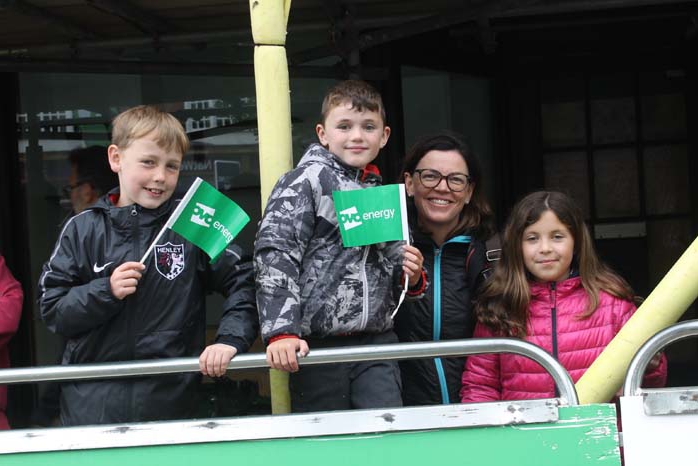 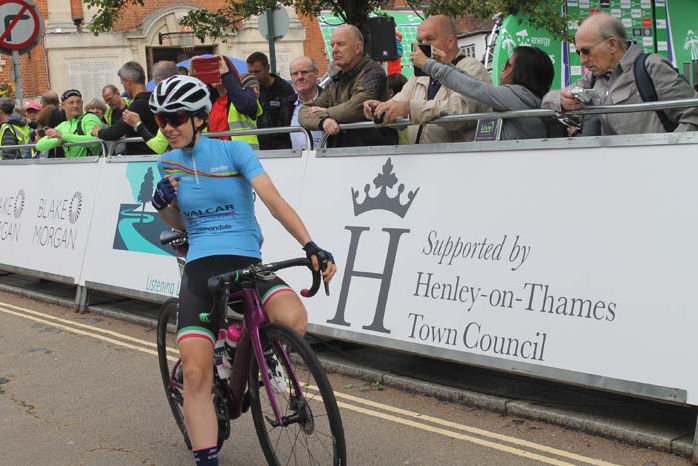 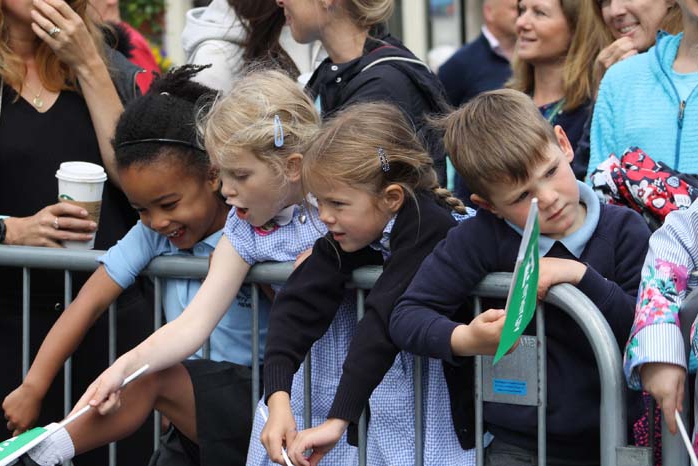 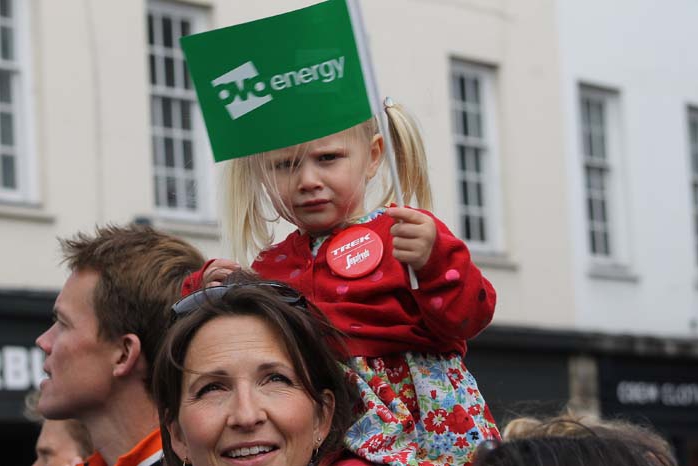 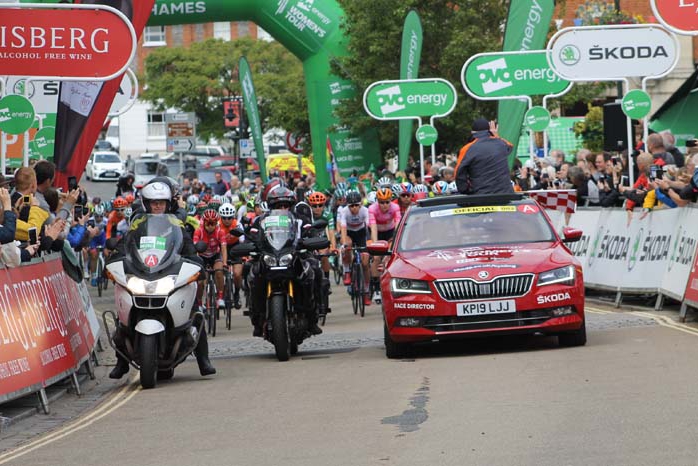 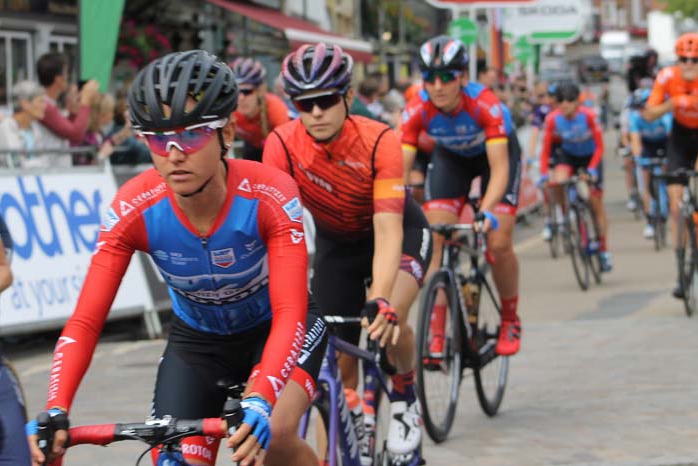 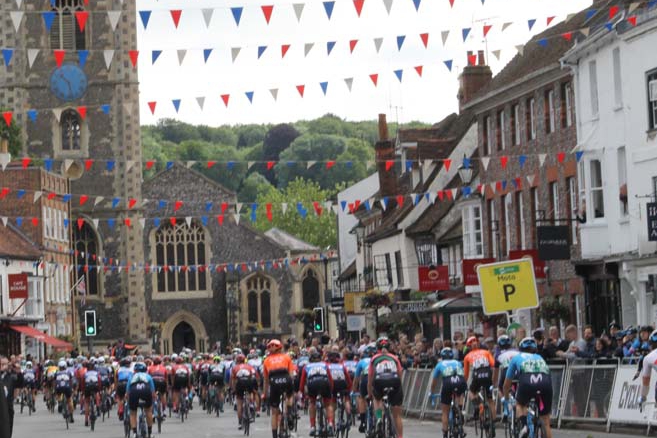 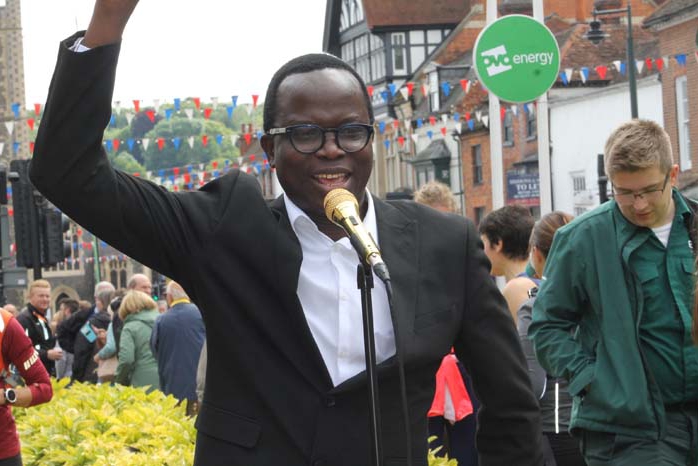 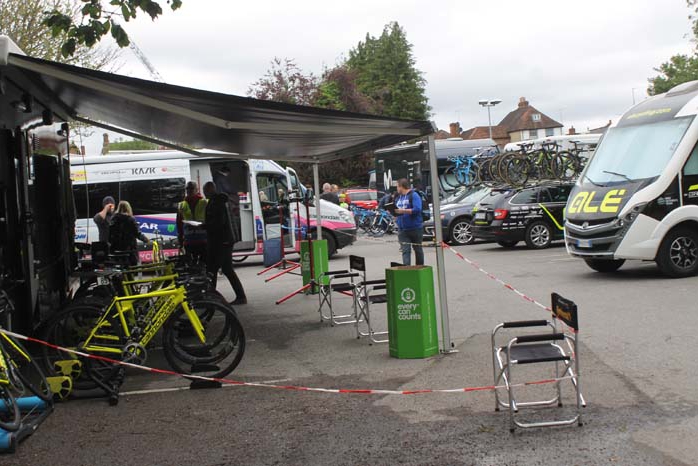 Crowds came out to watch the start of the OVO Energy Women’s Tour this morning in Market Place.

16 international teams of six elite riders were introduced on the stage before they set off on Stage 3 of the tour (145km/91 miles) to Blenheim Palace. The riders rode down Hart Street, Thameside, New Street, Bell Street before leaving Henley via the Fairmile.  The stage takes in two mountain climbs in Pishill and Britwell Hill and two sprints in Wallingford and Broadway.

Greys Road car park was closed for the cycling village where the teams’ support crew and vehicles were stationed.

Mayor, Councillor Ken Arlett, officially started the race said, “I think a lot of people were apprehensive, especially over the last couple of days.  You’ve only got to see though this morning to see how successful it is going to be.  People have turned out in their hundreds, or even in their thousands.  I think it’s good PR for Henley-on-Thames.”

Greta Carey, aged 12 from Palmer Park Velo club who led out the riders said, “I’ve been cycling since I was very young at the club.  I’m honoured to be leading the cycle stage today.”

Former Olympic Skier, TV presenter and Henley resident Graham Bell said, “It’s great to have a world class event start from your home town.  I’ve been to many cyclist events in the past and watched and worked on stages of the Tour de France.  I’ve also worked on the Tour of Britain and it is great to come out to support and spectate to watch some of the best athletes in the world.”

Year 5 children from Sacred Heart School made banners and bunting and came to cheer the riders on.  Parent Darryl Grant who was helping escort the children said, “The kids have recently done their cycling proficiency so we thought it would wonderful chance of a lifetime to see such a fantastic world class event.  We’d like to thank Henley Town Council for giving the children a special spot on the start line to watch from.”  A group of families from Trinity School also came out to watch the race.

Many local cafes, coffee shops and businesses opened especially early today to provide a ‘Big Bike Breakfast’ as the organisers had said that up to 10,000 people could come and watch the Henley stage.  Machin butchers opened and were serving hot dogs.  Barry from Machin said, “It’s been OK, a little bit slow but I think we’ll sell out.”

Some residents in New Street were not impressed this week and aired their views on social media after only being told on Monday this week that all cars including those in resident bays and disabled bays would need to be moved for the race.

The riders are due to finish at Blenheim today around 2.30pm.  To keep up with the tour go to https://www.womenstour.co.uk/