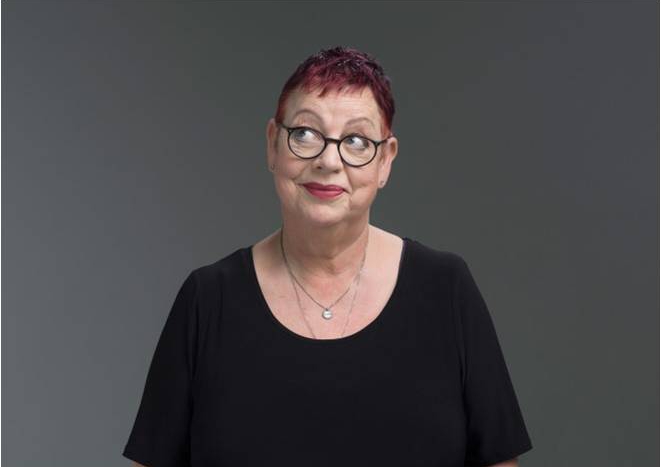 Jo Brand addressed the elephant in the room (the battery acid milkshake joke she made on Radio 4 Heresy show on Tuesday evening) at the start of the Henley Literary Festival event to promote her book, Born Lippy, at the Christ Church Centre on Tuesday.

On the Heresy show Jo said, “people who attacked Mr Farage and far-right political figures with milkshakes were pathetic. Why bother with a milkshake when you could get some battery acid?”

Interviewed by Cindy Burrowes, Jo said “The Hersey show is a show which the comedians and guests are asked to counteract,  challenge and almost give the opposite of the argument to the statement that they give you. Looking back on it I think it was a somewhat crass and an ill-judged joke.  After receiving applause from some members of the audience, Jo said “Hmm, interesting mixed reaction. What actually happened was I realised almost as soon as I said it, I followed it up by saying, I would never do anything like that – it was purely a fantasy and I’m very sorry.  Nigel Farage tweeted the first bit that I said without the second bit when I apologised and said it was a joke and not something I would encourage. The current situation is I’m being chased around England and being asked if I feel I should apologise. I felt I apologised for it as I did it on the night.  I’m a human being and people make mistakes. I apologise to all the people who I have offended.”

Acting was Jo’s ambition when she was younger.  She said “I found out it wasn’t going to work out as I wasn’t very good at it.  I only appeared in one episode of Ad Fab and a review afterwards said, “Everyone was over acting apart from Jo Brand who couldn’t act at all.”  Jo got into comedy as she wanted to write and say her own stuff.

In the book, Jo lists book characters she admires which includes Aunt Betsey Trotwood from David Copperfield who is a great example of a confident older woman.  Jo said, “I used to be scared of groups of teenage boys and one day I saw a group throwing snowballs at cars and they hit this old lady’s car.  I started running at them, which is terrifying enough but then I shouted who wants a blow job!”

Jo talked fondly about her 87 year old Mum, who she described as a feminist before feminists existed and how she taught her to stand up for things, telling a funny story about how her Mum had sprayed the Council offices in Ludlow late one night as she thought they had taken a backhander from Tesco to build a store there.  Jo added, “She taught me to be a criminal!”

Her favourite comedians are Victoria Wood, Dawn French and Jennifer Saunders, Jo commented, “I love any woman comedian who is prepared to look dreadful to get a laugh.  I just loved the Victoria Wood swimming sketch when she was covered in grease.”  She then told a story about going to a fish and chip shop recently when a women was staring and pointing at her.  She she finally said, “You’re Dawn Saunders!”

Will Jo ride out storm in the milkshake cup and come out the other side still making us all smile. We’ll have to wait and see…

HAHG Lecture: Chalgrove Church and Its Paintings
Scroll to top