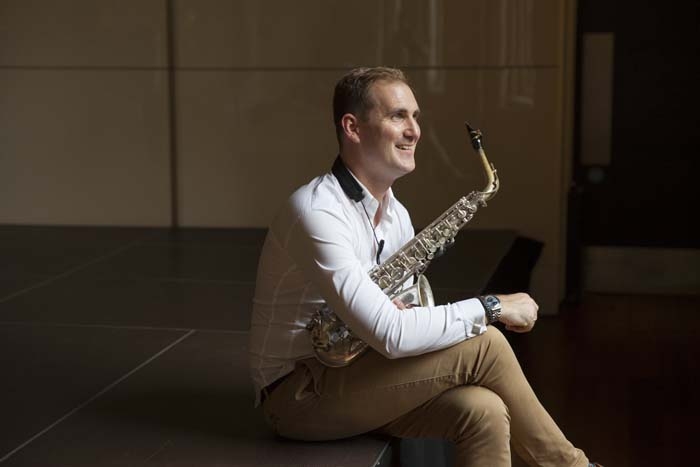 On Saturday 13 July, at 12 noon, Henley Symphony Orchestra makes its return visit to Henley Festival’s floating stage for its popular annual summer classical concert. Joining the HSO on stage will be eminent Henley-born saxophonist, Huw Wiggin, Commonwealth Musician of the Year and First Prize and Gold Medal winner of the 2014 Royal Over-Seas League Annual Music Competition.  He will play the virtuosic Scaramouche by Milhaud and his own contrasting transcription of Bach’s Keyboard Concerto BWV 1056 with its famous Largo.

Huw Wiggin is one of the most popular saxophonists of his generation. He has performed in venues as far afield as the Forbidden City Concert Hall in Beijing – where he gave recitals and a concerto performance of Eric Coates’s Saxo Rhapsody – as well as those closer to home such as London’s Wigmore Hall. Other past highlights include appearances at Brighton, Newbury, Henley, Ripon and Edinburgh Fringe Festivals. His performance of Milton Babbitt’s Accompanied Recitative was broadcast by BBC Radio 3 on ‘Hear and Now’ to celebrate the composer’s centenary.

The concert opens with Sibelius’s much-loved Karelia Suite, which he wrote in a mood of nationalistic fervour for the Karelia region of north-east Finland. We are then transported by the youthful passion of Wagner’s Tannhäuser overture to the mythical mountain of Venusberg and the fortunes of the erring knight. After the delights of Huw Wiggin’s saxophone, the HSO performs Tchaikovsky’s Fantasy Overture, Romeo and Juliet, which was inspired by Shakespeare’s play of the same name and contains one of the most famous romantic melodies of all time. A whirling Slavonic Dance by Dvořák brings the concert to a triumphant close.

Henley Symphony Orchestra, under the expert guidance of its Music Director Ian Brown and leader David Burton, continues to attract players from across the Thames Valley. It promotes an annual series of four concerts, featuring internationally acclaimed artists, to provide high-quality classical music-making for the enjoyment of local concert-goers.

Since its formation in 1970 the HSO has given concerts in Henley’s twin towns of Falaise and Leichlingen and, in 2017, performed at the Bled International Music Festival in Slovenia for the first time. It appears regularly at Reading’s two main performance venues, the Concert Hall and Hexagon, and last year gave its inaugural performance on the floating stage.

Sit back on the bank of the River Thames, watch the world float by and enjoy beautiful classical music played by Henley’s very own orchestra.

Performance starts at 12pm and ends at 1pm

Free parking available between 11am and 3pm

For more information go to: www.henley-festival.co.uk