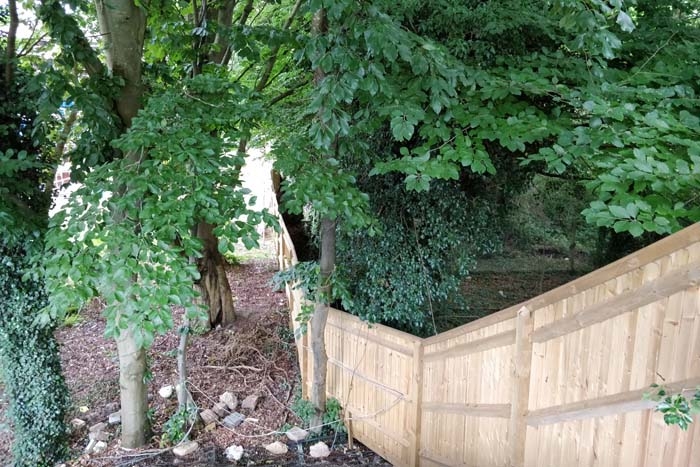 An application for a footpath between Mill Lane with Newtown Road to be added to the designated maps under the Wildlife and Countryside Act 1981 submitted by resident and now Councillor Michelle Thomas in 2016 was supported by Henley Town Council when it was reviewed at their recent Planning Meeting.

The footpath has been fenced off since LA Fitness closed in August 2015 by the landowners.  Michelle submitted the application along with photographic evidence, maps and witness statements which proves that the footpath was used for the last 20 years.

A previous application was submitted in 2015 by former Town Clerk, Janet Wheeler which was withdrawn after discussions with the then landowner Henthames Ltd.

The LA fitness site is now being developed by Hallmark Homes to build an 80 bedded care home.

As Oxfordshire County Council failed to make a decision within 12 months, Michelle applied to the Secretary of State for a direction to be given to the Council to determine the application by a given date.  OCC opened the consultation on the 15 May for 4 weeks and has consulted South Oxfordshire District Council, the landowner and the Local County Councillor.

Michelle Thomas said, “I am so pleased for Henley on Thames that Oxfordshire County Council are so far moving to add this footpath to the designated maps.  The Planning Committee unanimously voted to reiterate its support and request OCC move to continue.  The footpath links the train station with the business park, Mill Lane and the river.  It is an important circular route for residents and visitors alike.  I do hope that Hallmark Homes can see the positives in returning this path to Henley and look to the example Invesco set when they kept the path for the community during the building of their headquarters.”

Regarding the consultation, a spokesperson from Hallmark Care Homes said: “We are in discussion with the council to find a solution that meets the needs of the future residents at Henley Manor and the local community, and we await their feedback.”

Mermaid Reinstalled in Time for Regatta
Scroll to top