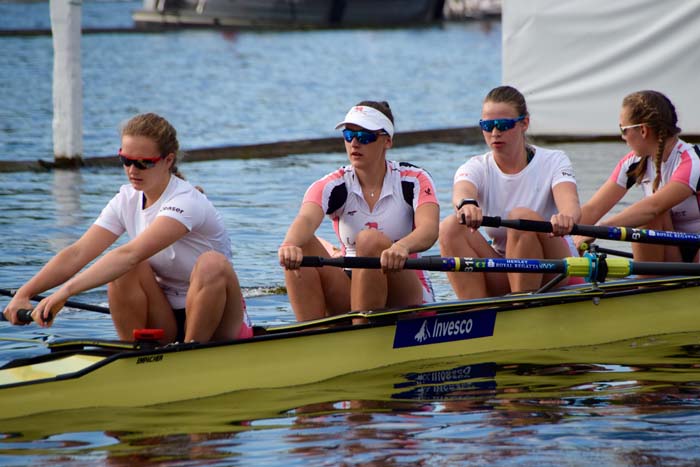 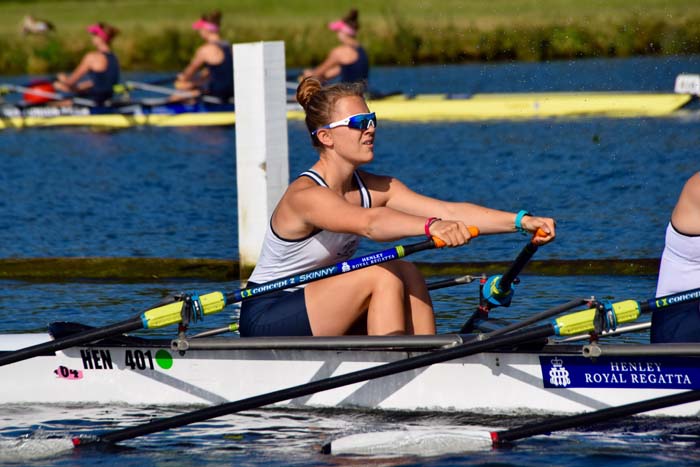 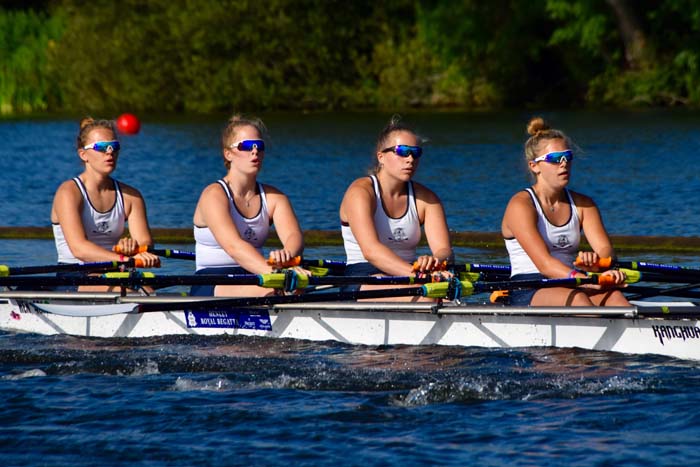 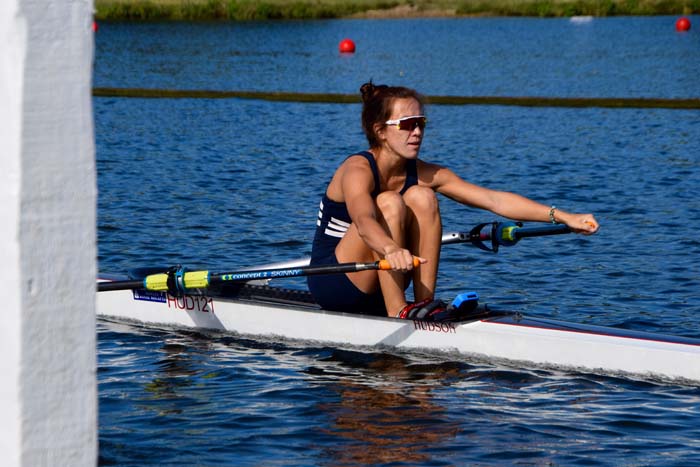 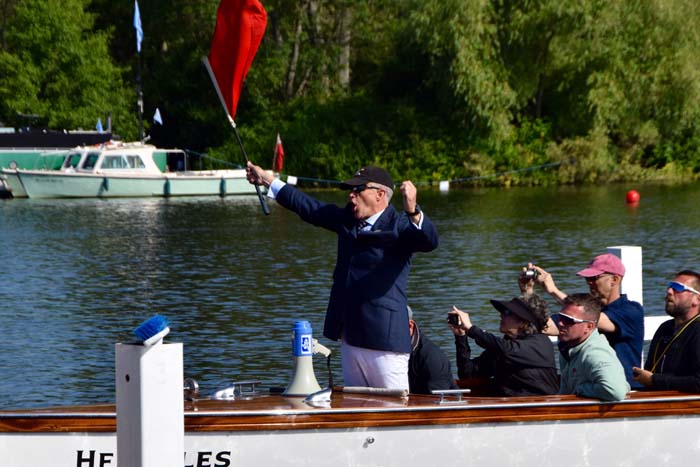 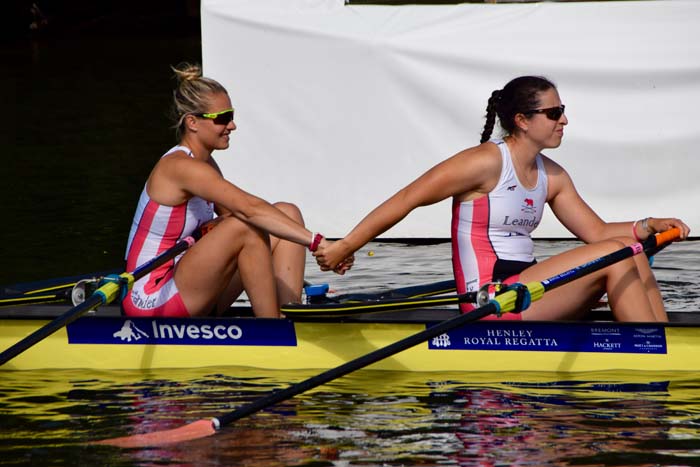 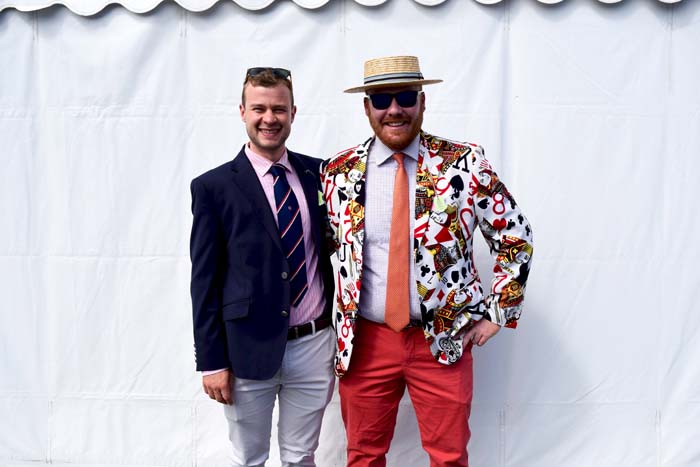 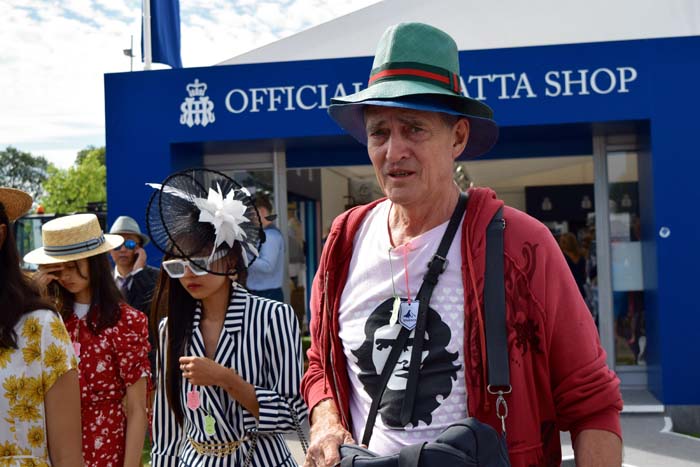 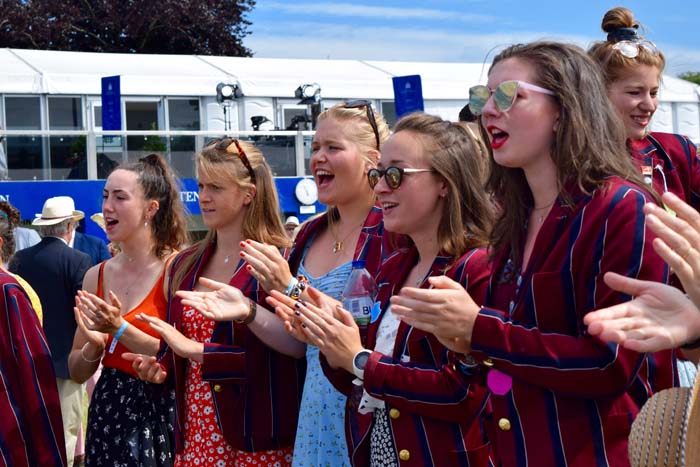 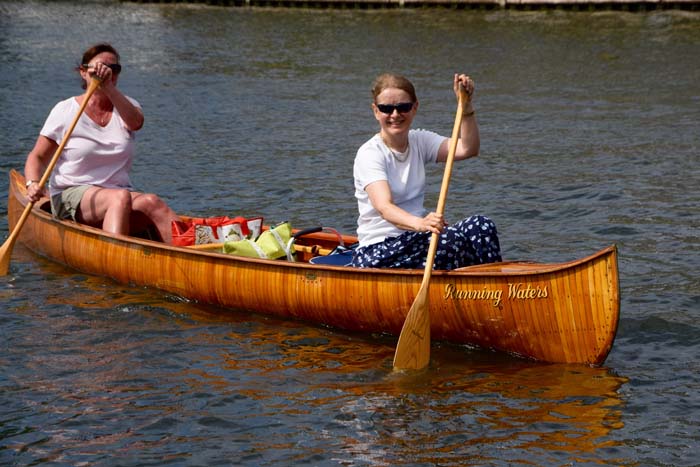 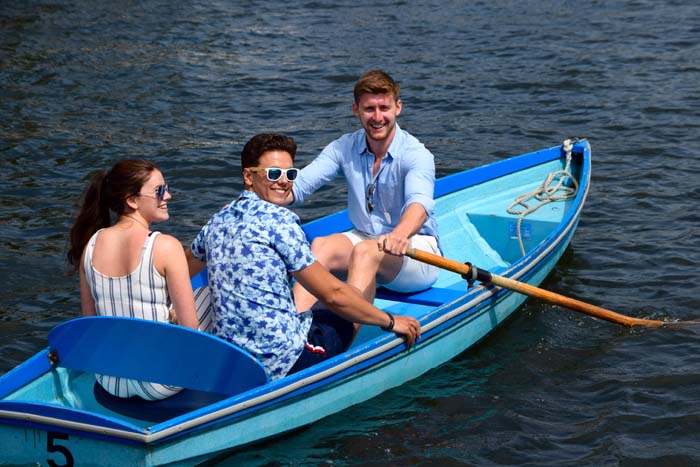 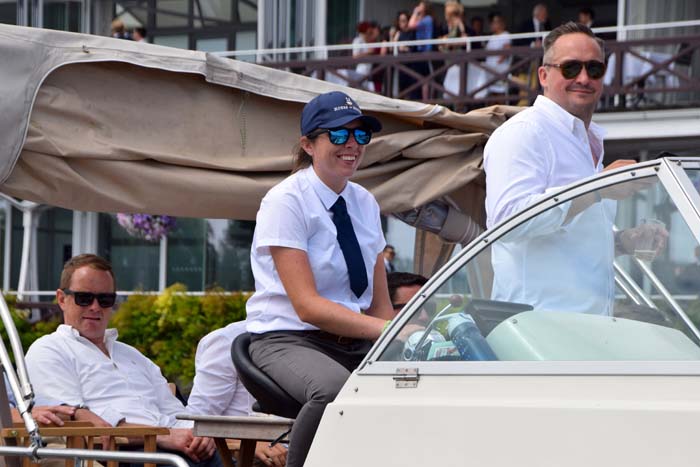 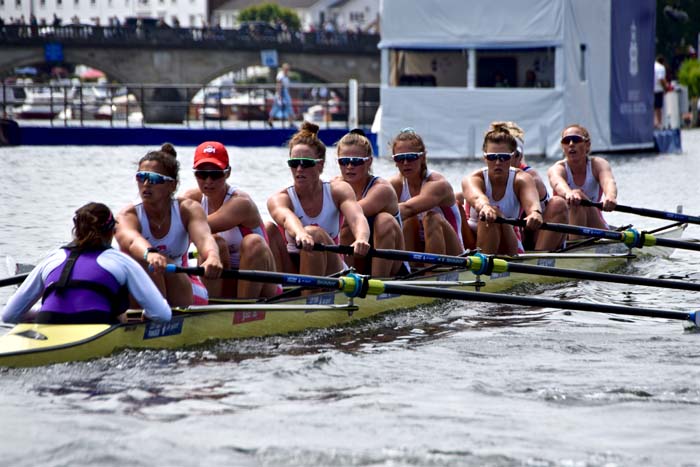 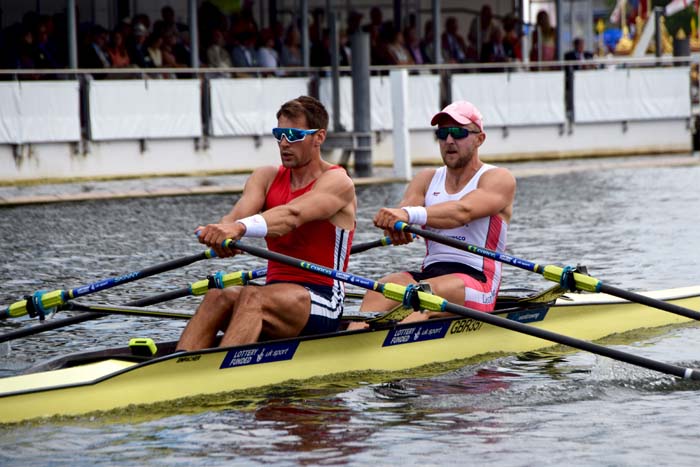 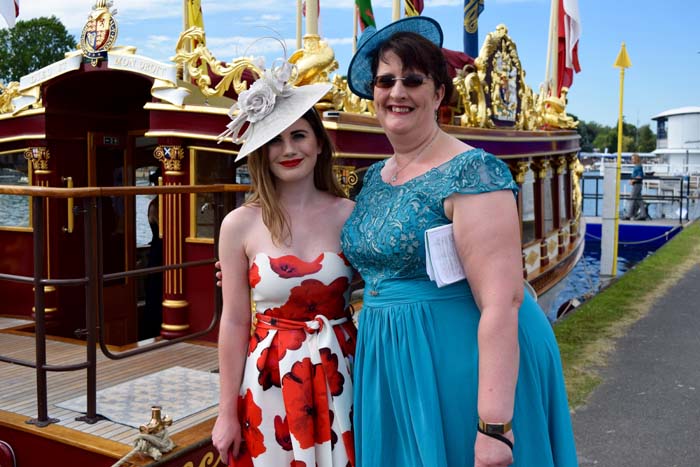 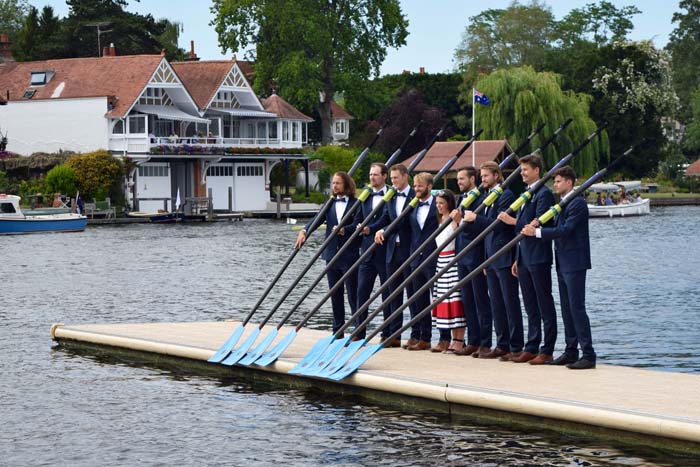 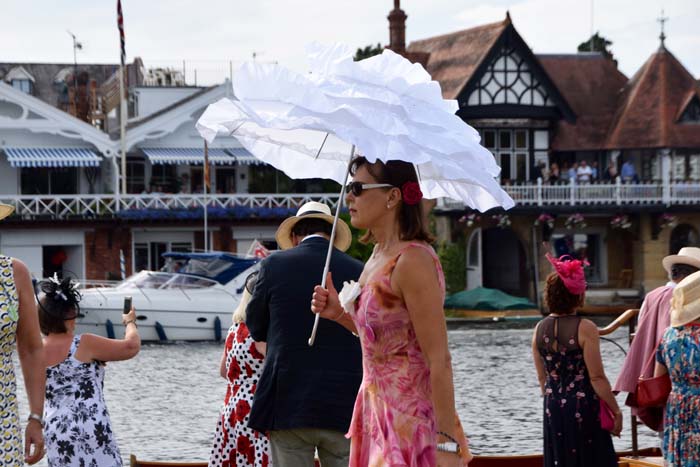 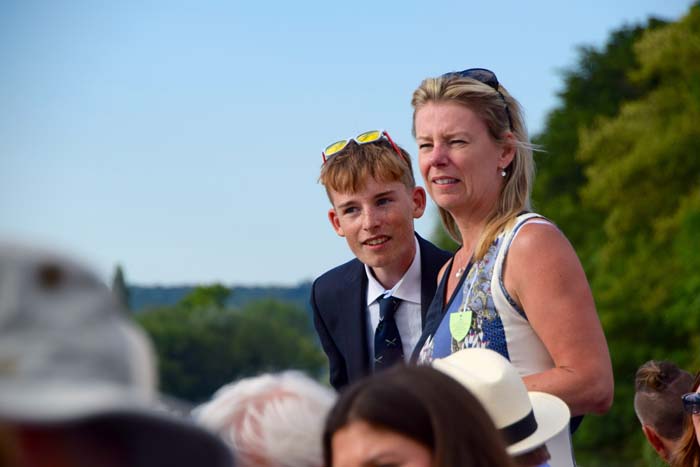 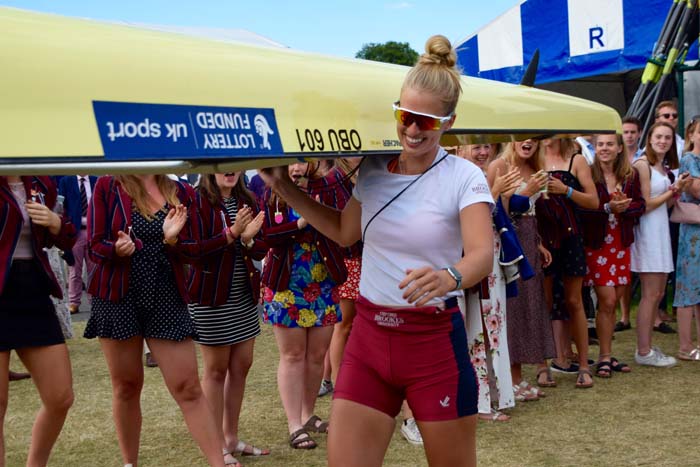 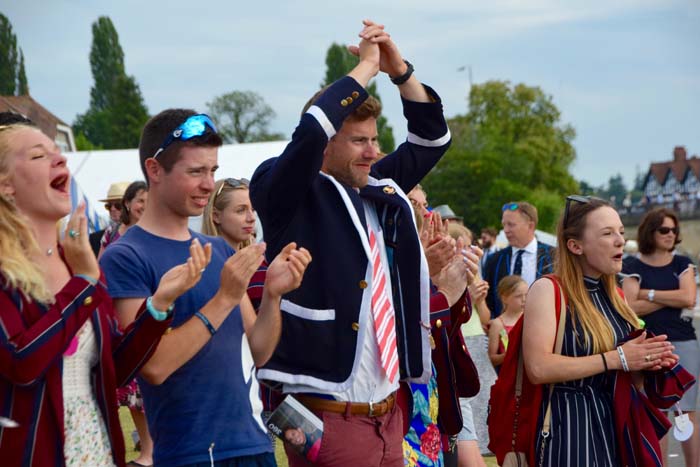 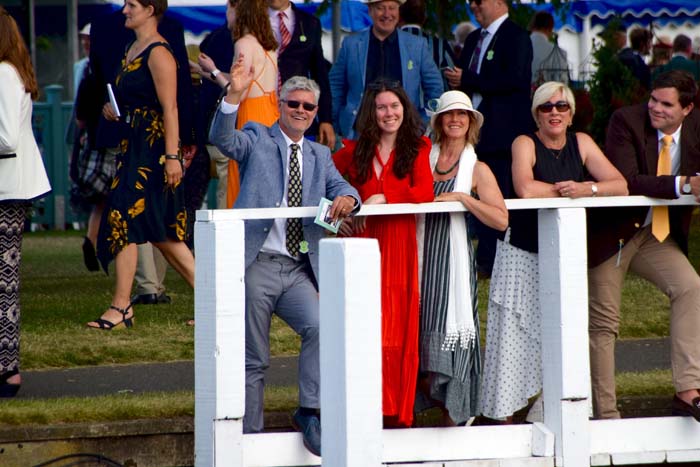 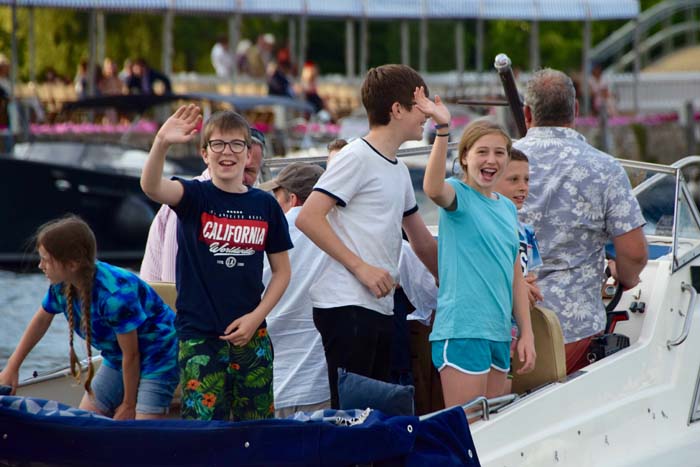 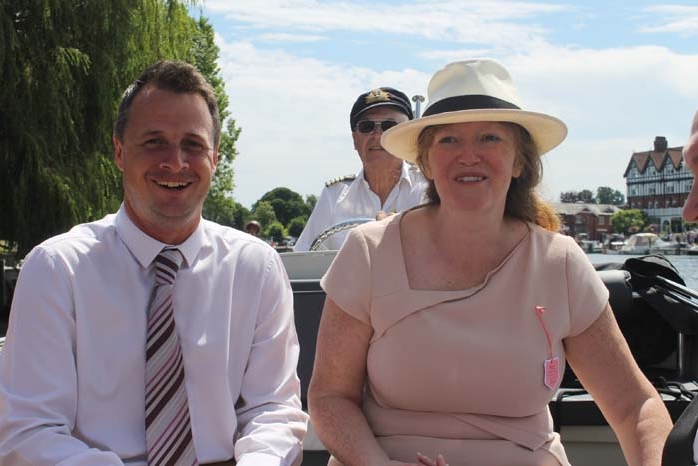 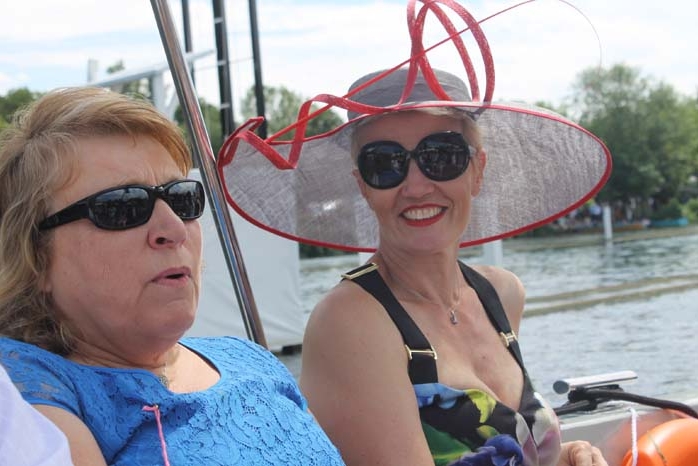 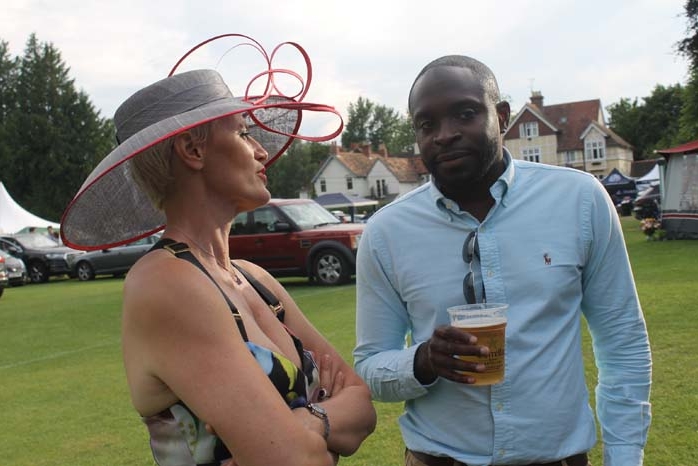 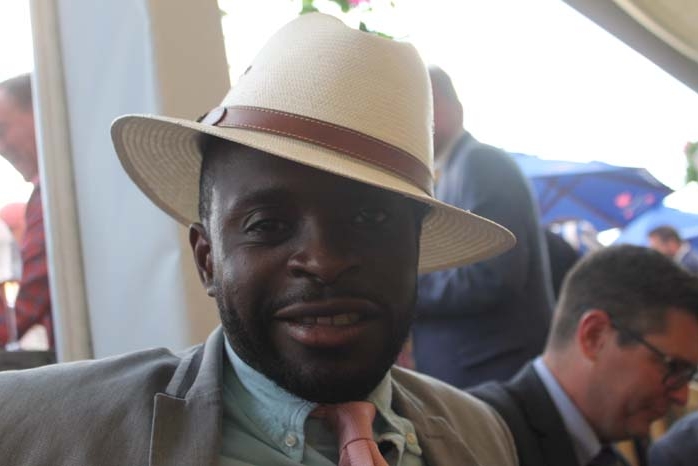 Henley Rowing Club had 2 crews in the Diamond Jubilee (JW4x).  The A crew beat The Lady Eleanor Holles School by 2/3 length but unfortunately the B crew were beaten by Marlow Rowing Cluby by 1 1 3/4 lengths.  In the Fawley Cup (JM4x) the two Henley Rowing Club crews faced each other with A winning by 3 3/4 lengths. Four-time winners of Diamond Jubilee, Gloucester Rowing Club, had their hopes of a fifth title stopped dead in their tracks. In the fourth race of the day, the Hammersmith school, Latymer Upper, were unable to etch out a lead of more than half a length until Gloucester collided with an immovable object in the shape of the wooden booms.

Gillian Cooper from Upper Thames Rowing Club was halted in her path to get to the semi-finals when she was beaten by Dymohenko from the Ukraine easily.  Her clubmates Jackson and Stephens were also knocked out in the Double Sculls by New Zealanders, Storey and Harris by 3 lengths.

Leander Club had a good Friday with only losing 3 events out of 11.

In the Stonor Challenge Cup (W2x) Beth Bryan and Katherine Maitland winners of Women’s Regatta trophy were knocked out by Baer and Richter from Germany, losing by 4 1/2 lengths.

Lenny Jenkins and Harvey Kay were representing Leander in the Ladies Challenge Plate (M8+) in the British U23 composite crew.  They beat Frankfurter R.G., GER by 1 2/3 of a length. The Leander Club crew beat East India Club & Gent, BEL by 1 3/4 of a length in this competition too.

In the Princess Grace Challenge Cup (W4x)  Jess Leyden was rowing for Leander in a composite crew.  In a tight first quarter mile, the crew went on to beat RC A.S.R.Nereus & K.S.R.Njord, NED by 2 1/4 lengths.

The GB eight with 6 Leander Club crew members competed in the Remenham Challenge Cup (W8+).  They kicked off their Henley campaign strongly with a good win against Oxford Brookes University by 1 length.  In the GB development 8 with Leander Club’s Susie Dear and Natasha Harris White sitting in the bows and Morgan Baynham-Williams coxing the crew, the composite crew managed to pull away over the course to 3 lengths at the mile marker. Bringing their rate down in the closing stages of the race, they crossed the line 1 3/4 lengths ahead of the Dutch crew R.S.V.U.Okeanos & Rv. Willem II/

In Princess Grace Challenge Cup (W4x) the Chinese National Team managed to take an early advantage in the race and by the 1/4 mile marker had a 1 length lead over Leander. They capitalised on this when Leander caught a crab close to the barrier, and as Leander recovered and restarted rowing. They rejoined the race in a spirited fashion and pushed back along the course, but were unable to close the gap and the Chinese crew crossed the line a comfortable distance ahead.

Ball and Ballenger representing Leander in the Silver Goblets and Nickalls Challenge Cup (M2-).  The pair had a strong start giving them a good lead by the first marker. They steadily increased this all the way along the course, reducing their rate from Fawley onwards to cross the line over 5 lengths ahead of their opposition, Poynter and Burton.

Leander Rowers (Dix and Collins) were competing in both boats in the Double Sculls Challenge Cup.  Collins and Thomas from Agecroft, the GB double for Poznan World Cup next week beat Hull and Dix by 1 length.

In the Prince of Wales Challenge Cup (M4x), in a closely fought race where Leander Club lead most of the way, the A.A.S.R.Skoll & A.U.S.R Orca, NED went on to win by  a 1/3 of a length.

The two Leander crews in the Fawley Challenge Cup (JM4x) saw them both win.  The A crew won against The Tideway Scullers School ‘C’ by 1 1/2 lengths and the B crew beat Lea RC by 1/2 length.

A composite crew of Leander and Cambridge beat Oxford University by 2 1/2 lengths in the Visitors’ Challenge Cup (M4-).

In the quarter-final of the Town Challenge Cup (W4-), Leander Club beat Molesey BC by 1 2/3 lengths.

Friday also saw the first outstanding set of four races, in The King’s Cup to commemorate the Peace Regatta of 1919. France knocked out the UK crew and will be joined by America, Germany and Australia in the semi finals in Saturday (today).

Our Editor had a another great Regatta Friday thanks to the very hospitable The Head Partnership solicitors with a boat trip down the river and visiting Leander Club afterwards.