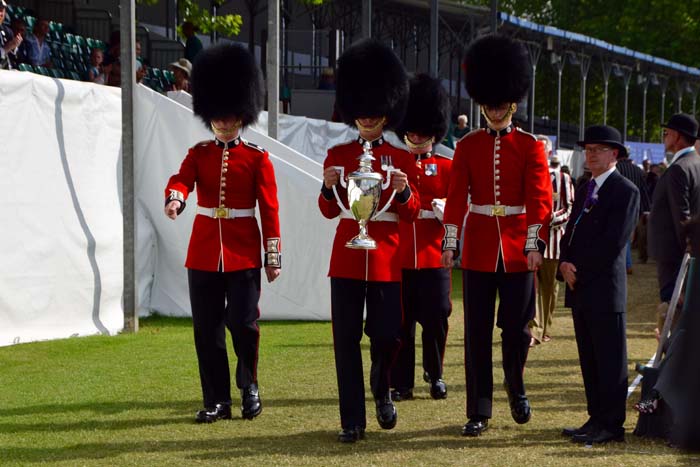 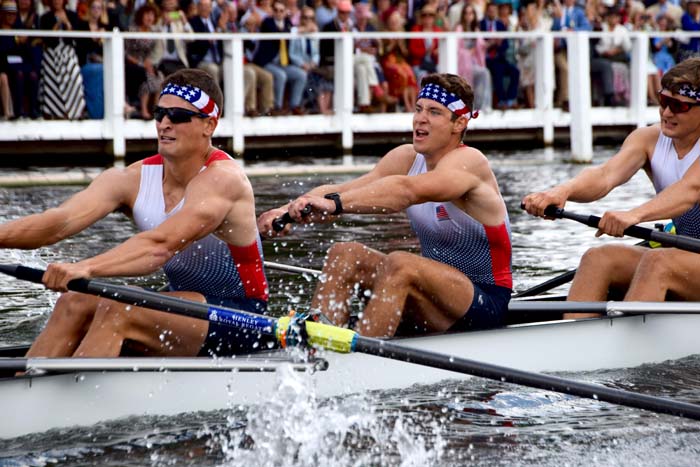 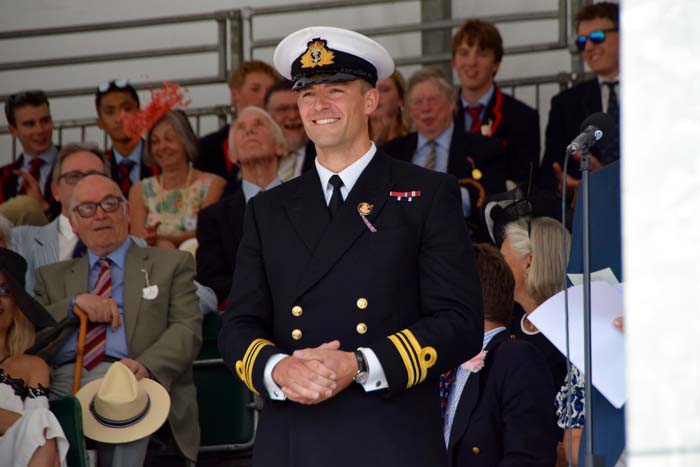 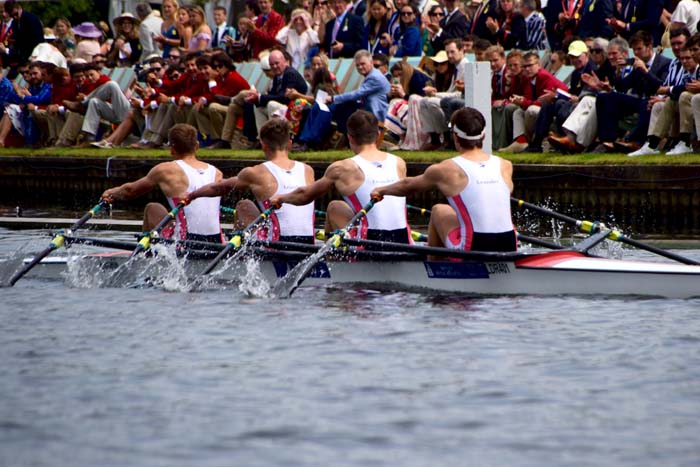 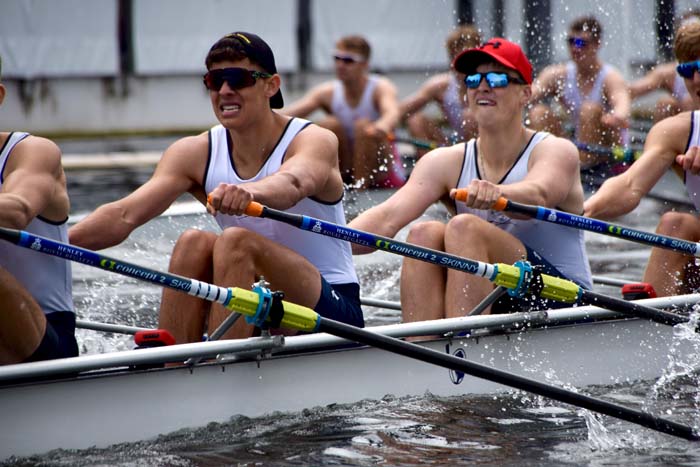 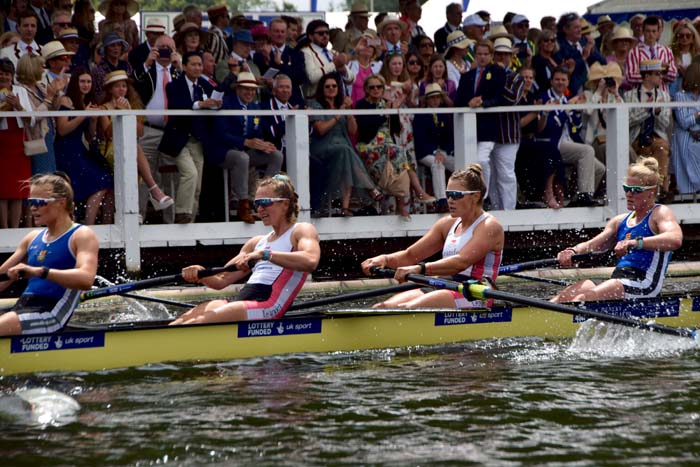 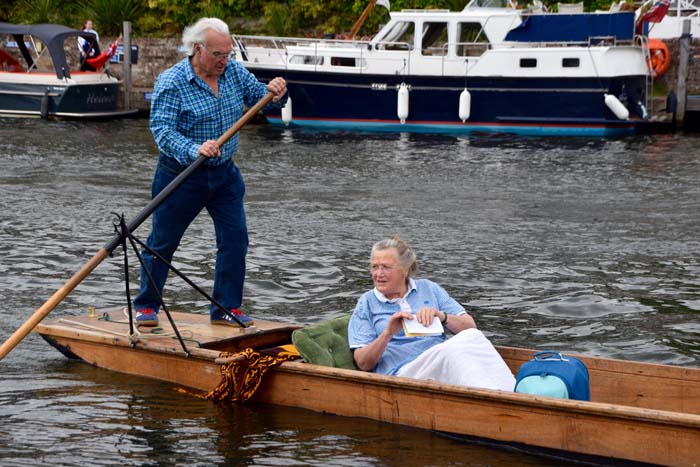 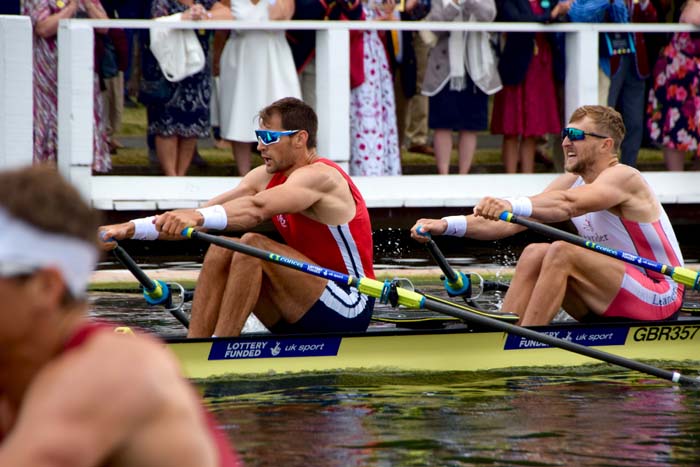 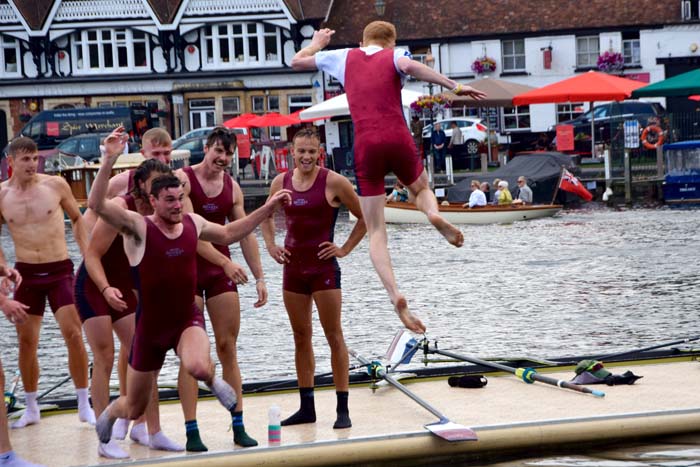 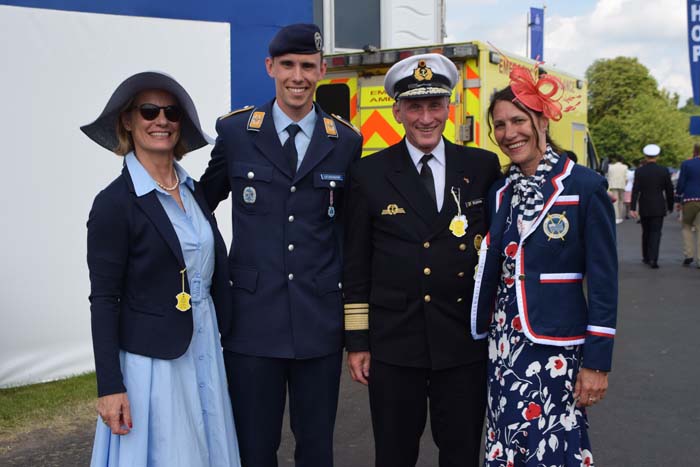 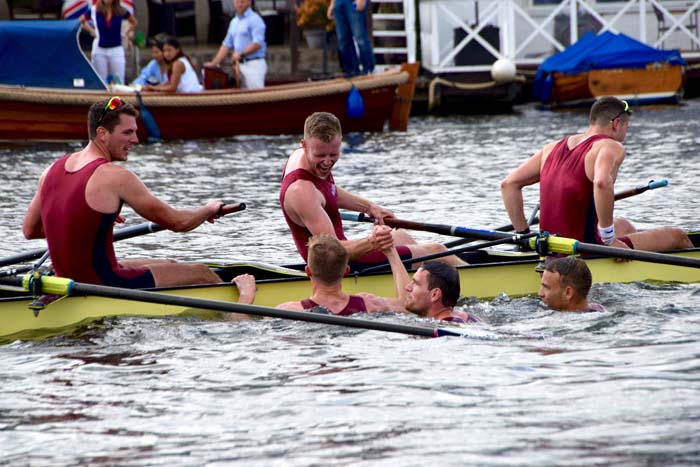 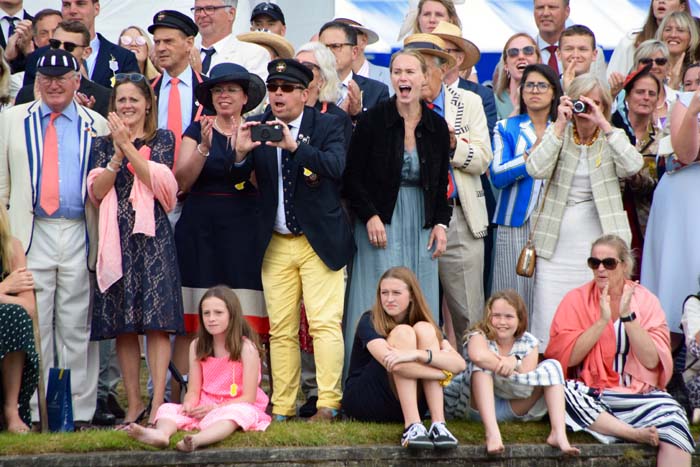 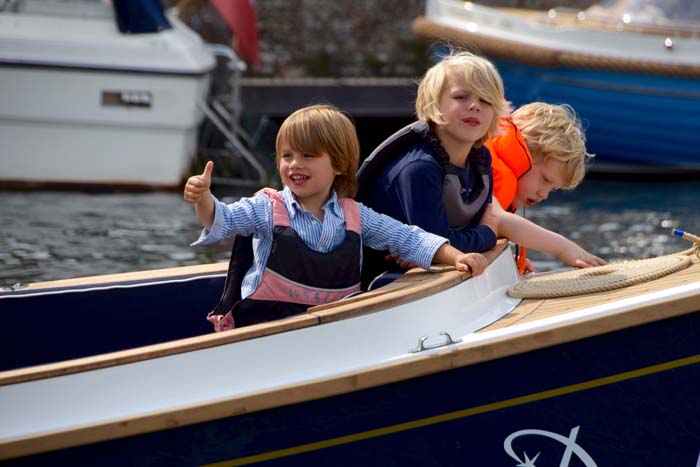 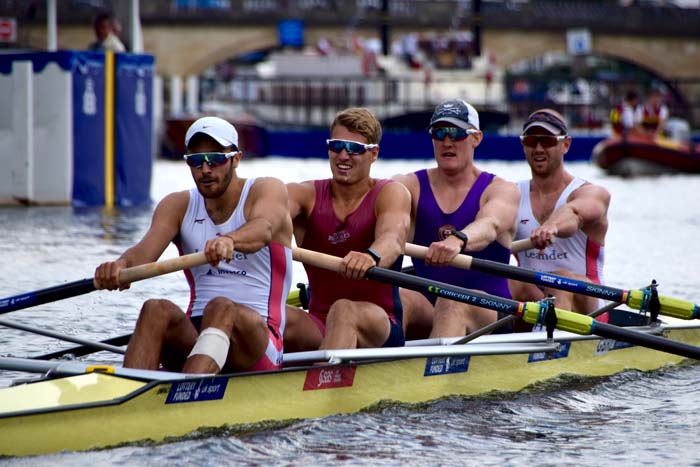 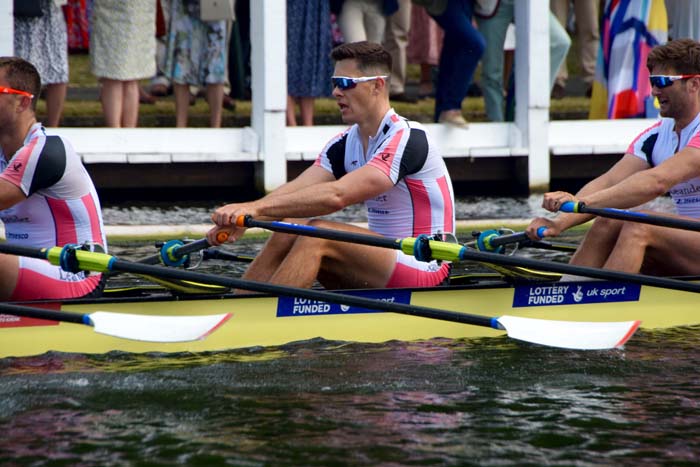 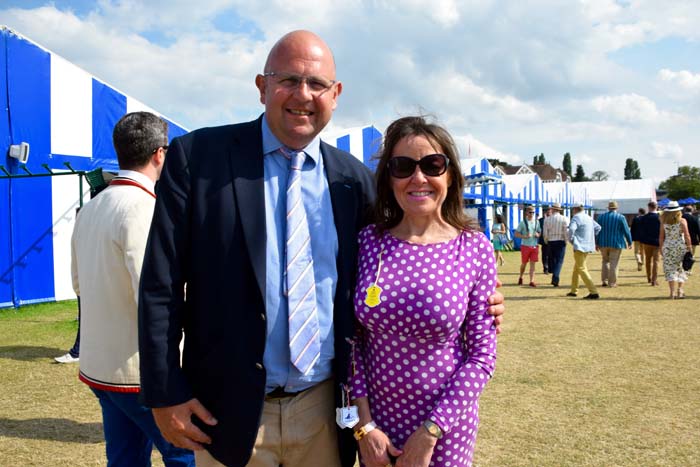 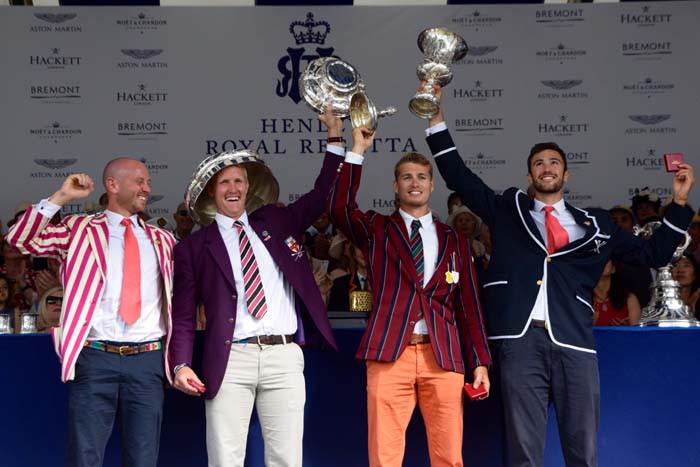 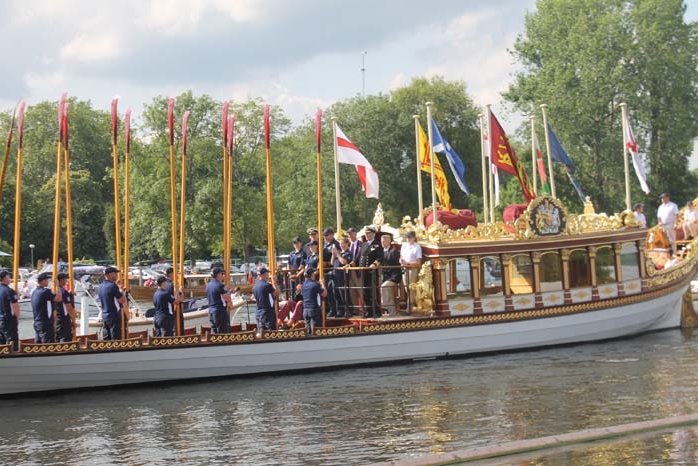 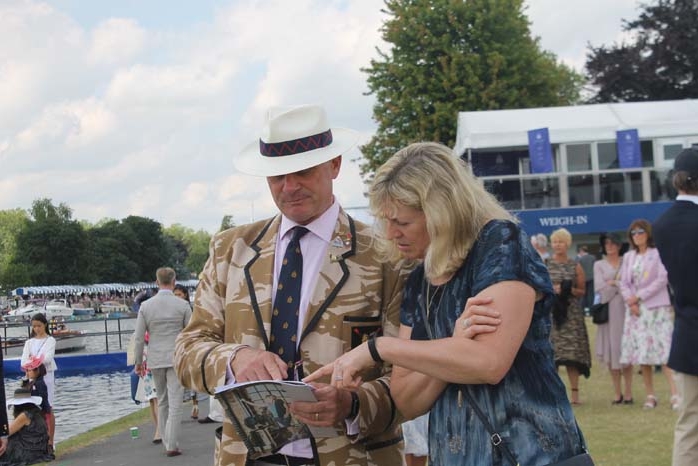 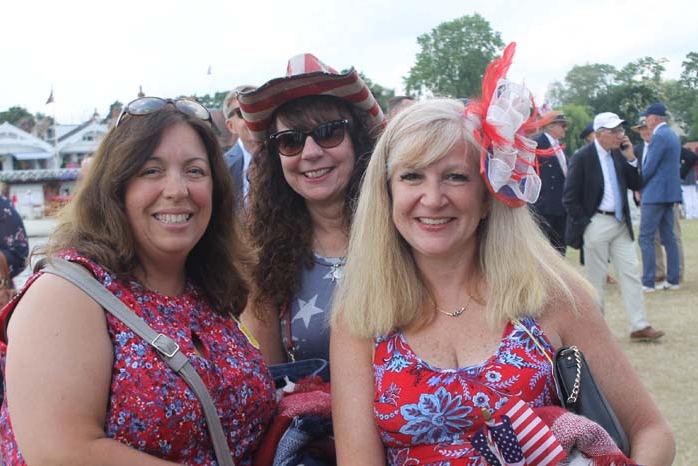 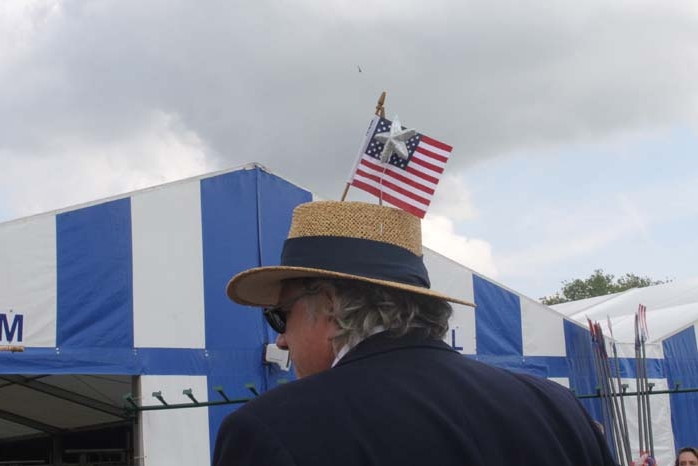 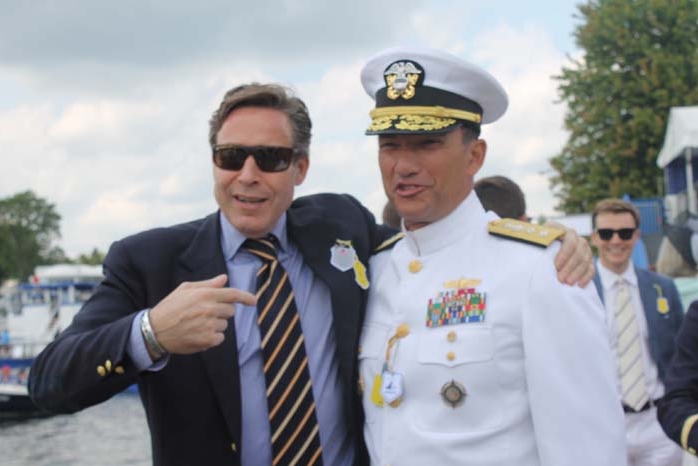 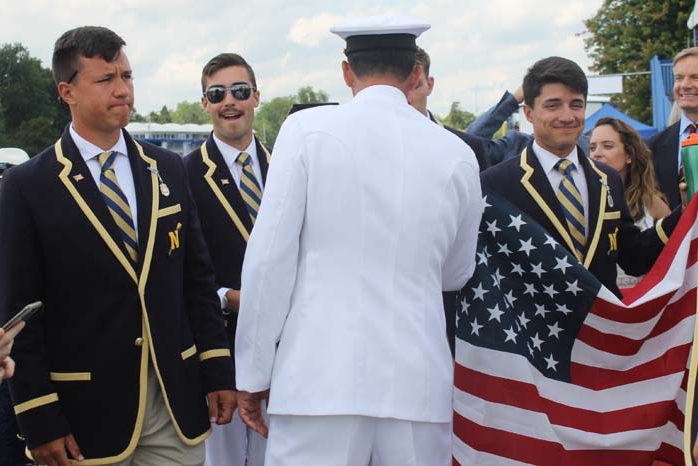 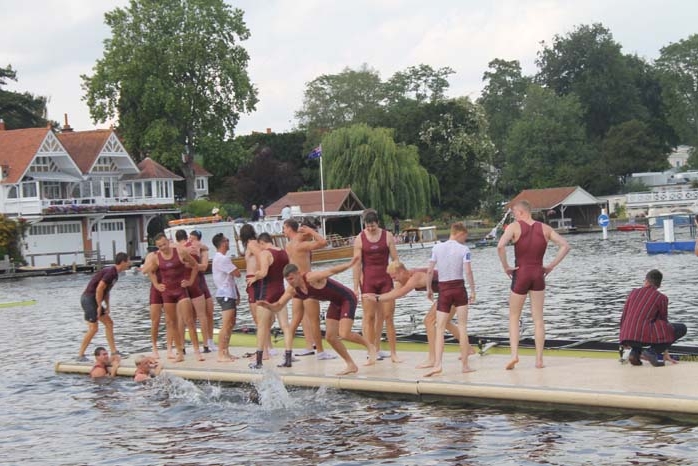 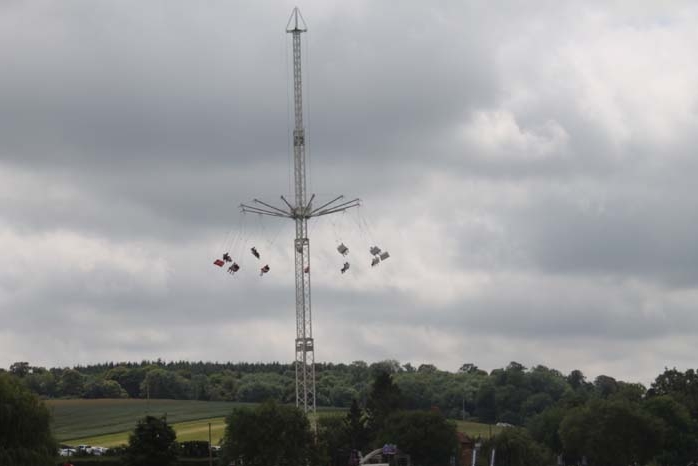 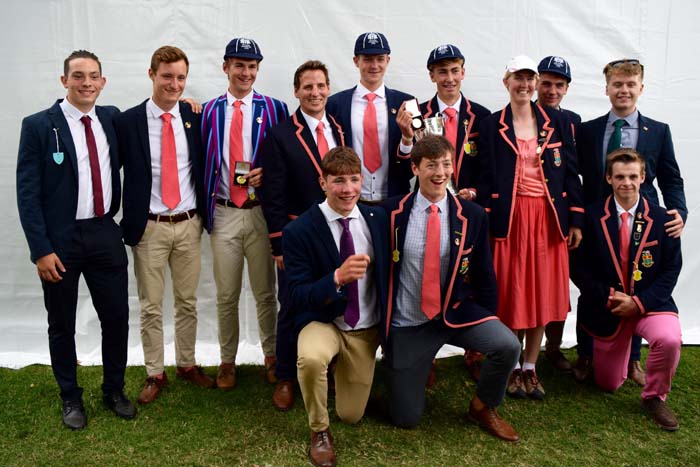 Henley Royal Regatta commemorating the 100th anniversary of the 1919 Peace Regatta came to a close yesterday on Sunday with the finals of 24 events including the King’s Cup, a commemorative mixed 8 military event.  The newly commissioned cup was brought to presentation table by four of the Queen’s Grenadier Guards.

Chair of Regatta’s Committee of Management, Sir Steve Redgrave, opened his prize-giving speech by saying, “We have been blessed by the weather.  If I may so it was perfect.  It was a little too warm last year, we’ve turned it down a couple of degrees and it was first class.”  He thanked the team of professional volunteers and members for their time and effort. He continued, “Our sport of rowing wouldn’t happen around the world without the volunteers and people passionate about this sport that we are involved in.  This year our broadcast will hit a million people around the world for the first time.  A number of records have been broken – 12 to barrier, 8 at Fawley and 8 to the finish. Another 44 seconds have been taken off the times we had this time last year. We have had 7 overseas winners to take trophies.”

Lieutenant Commander Pete Reed OBE, winner of 3 gold Olympic medals in Beijing, London and Rio, dressed in his Royal Navy uniform, was this year’s prize-giver.  Sir Steve said, “This year I can’t think of anyone better to be our prize-giver with the King’s Cup and the 100th anniversary of rowing starting after the Great War. To have a serving military rowing officer is fantastic to have.”

Pete said, “It is truly my honour to address you all today. On this beautiful day, 7/7 here at Henley Royal, the finest and most historic river Regatta full stop.  The finest and the hardest to win with five days of gruelling competition in a knock-out tournament in the most physiologically demanding sport and I’ll argue for the rest of my life about it with anyone.  Competitors have come from all over the world and this in historic year they have come from greatest allied military forces to commemorate the 1919 Henley Royal Peace Regatta. When a time when the world was on its knees, the rowing community came together to heal wounds and build normality again.  100 years on the fittest and finest military crews from Canada, Netherlands, Germany, United Kingdom, France, Australia, New Zealand and United States of America have shown their enduring solidarity honouring the past by thrilling us with competition this week.  Men and women have raced in the same boats together for the first time at an elite rowing event in keeping with our forward thinking defence.  We also thank you, not just for this week and not for all of your efforts for building up for the King’s Cup but the way you serve your country and the way you risk everything to protect our way of life.  The original King’s cup was presented by King George V in 1919 and I now have the greatest honour to present this newly created masterpiece crafted with her Majesty’s gracious permission made from precious alloy pieces of military history from each of the competing nations.”  The base of the cup was made by local Henley craftsman, Colin Henwood who told us that he had used old pieces of Regatta booms to create the wooden base. 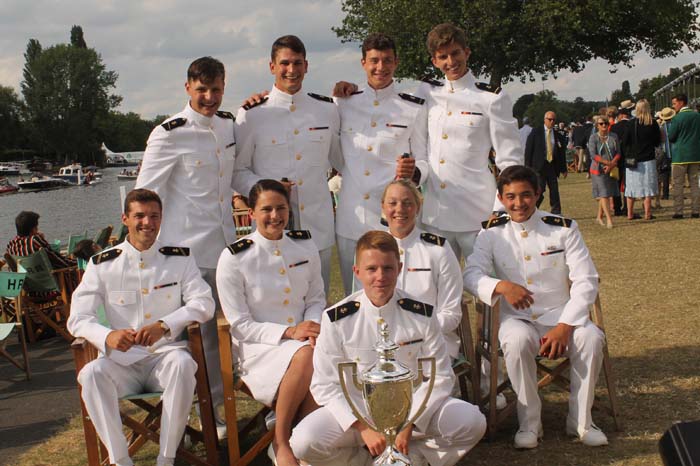 The King’s Cup was then presented to the United States of America (pictured above) who were up against their counterparts from Germany in the final. The crews could hardly be separated, but as they approached the mile and ⅛th, the Americans began to charge. Germany’s counterattack through Stewards was unsuccessful as the Americans hung on to win the historic race by 3/4 length.

In the first local race of the day, Leander Club A (Tim Eilers, Miles Devereux, Stephen Hughes, Alex Milne) were facing Henley Rowing Club A in the Fawley Cup (JM4x).  Leander, having come second to Henley RC at the recent National Schools Championships, this race promised to be an exciting one, and it did not fail to deliver. A very clean start from both crews, was followed by a slight steering correction from Henley, an opportunity that the Leander crew seized and moved a canvas up. A confident rhythm took them further out, to a length by the Barrier. A push from the local rivals came in the third quarter, closing the gap to 3/4 length. However, a replay of the National Schools result was not to be, and Leander responded to the challenge by sharpening and pushing away from the Henley crew, finishing a full length and a quarter ahead. 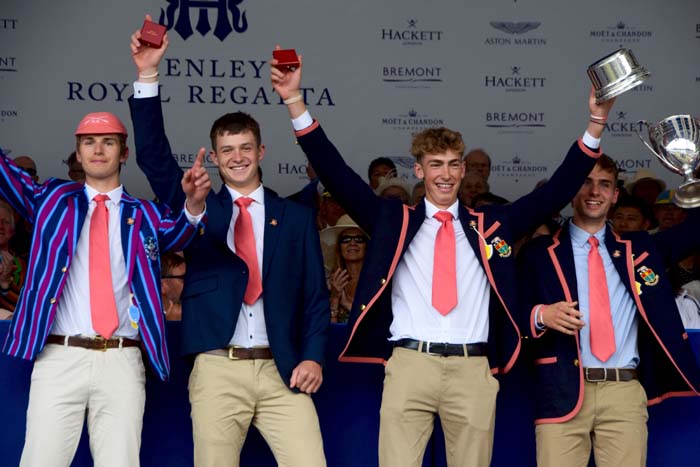 The British senior crew containing 6 Leander athletes lost in the Remenham Challenge Cup (W8+) to Waiariki RC from New Zealand. The crews were level to the quarter mile, but the long, powerful rhythm of the New Zealand crew saw them take a 3 feet lead over the Brits through the Barrier. Maintaining both high rate and length throughout the middle of the race, the Kiwis moved away from the Leander and Imperial composite, and a big move between the 3/4 mile and mile and the 1/8 gave them clear water, and shut the door on any attempts by the British crew to come back.

The GB men’s eight, represented by Tom Ford, Tom George, Jacob Dawson and Ollie Wynne Griffiths for Leander, came up against a strong Kiwi crew, containing Mahe Drysdale, in the final of the Grand. This was a very close hard-fought battle to the barrier, with the British crew initially in the lead and both crews surging their bows alongside each other. The Kiwi crew then managed to pull out to a slight 1/2 length lead, which they consolidated going past Remenham and extended to 1 length. This distance was held through to the end of the race.

In the Visitors’ Challenge Cup (M4-) Charles Elwes was representing Leander vs A.S.R.Nereus & D.S.R.Laga, NED.  The Dutch crew started off at a slightly higher stroke rate but made little impact on the Cambridge and Leander Crew, who were edging away through the quarter mile, and had over a length lead by the Barrier. Still pushing at rate of 37 through Fawley (and equaling the Fawley record as they went), the Brits looked dynamic and light, taking inch after inch. By Upper Thames, the gap appeared insurmountable and the the British composite could enjoy their moment, rowing confidently to take the win with an ‘Easily’ verdict.

John Collins from Leander with Graeme Thomas (Agecroft) won the Double Sculls Challenge Cup beating J.W.Storey & C.E.Harris, NZL by 1 length. Collins and Thomas got off to a good start which gave them a length at the Barrier but there was little change after this market.  The New Zealand crew through everything they had at Leander down the course, with rates rarely dropping below 37, showing the ferocity of the races and intensity of the both crews determination to win. 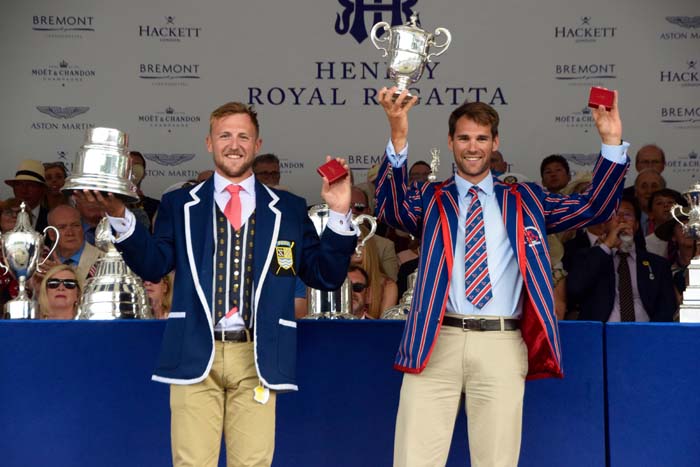 Two strong GB crews and Leander rowers met each other in this final of the Stewards (M4-). After some seat racing earlier in the week, there were some crew changes in the all-Leander crew, but both have been training together for a few weeks. Racing your teammates at Henley Royal Regatta is always hard, with Leander and Oxford Brookes (represented by Sholto Carnegie, Ollie Cook and Matt Rossiter) moving off the start powerfully to a 2 length lead by the Fawley marker. Some erratic steering from the Leander crew and a crab early in the race meant they were unable to get back onto terms, crossing the line 2 1/2 lengths behind their opposition.

The Queen Mother Challenge Cup (M4x) Pete Lambert, Jack Beaumont, Angus Groom and Jonny Walton (photo below) from Leander and a GB squad crew saw them take a strong early lead against Frankfurter RG from Germany.  By the Barrier they were 3 lengths ahead, and were always in control of the race. The German crew nudged the booms early on, although this did not affect the outcome of the race and the Leander British crew crossed the line a good distance ahead, with the verdict of the race being ‘Easily’. 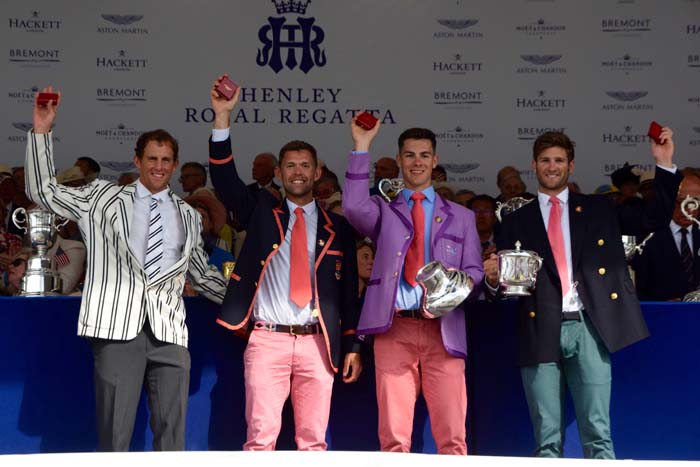