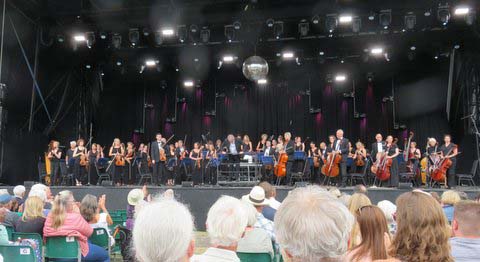 Saturday morning had all the ingredients needed for a special musical event at the Henley Festival when the Henley Symphony Orchestra (HSO) performed on the floating stage. The setting was idyllic, the weather perfect and the music popular with the large audience. Added to this summer scenario, the ever-inventive musical director, Ian Brown had included the talented saxophonist, Huw Wiggin, to perform two contrasting pieces, a Bach concerto and Milhaud’s Scaramouche.

The concert opened with Sibelius’s Karelia Suite, written as a nationalistic tribute to a region of Finland at a time when most of the Karelia area of Finland was under Russian control. This music was commissioned for a students’ association, premiered at a university in Helsinki and has seen various rewritings.  The two pieces played were perhaps among the best known. The Intermezzo had a slightly sticky start but the shimmering strings (competing with an overhead aircraft), developed a calm misty northern atmosphere before the gradual crescendo to a march-like melody with the percussion providing a measured control. This regular march-like tempo was further developed in the Alla Marcia, a piece showcasing ‘authentic folk music’.

The JS Bach concerto BWV 1056, originally written for violin, which Huw Wiggins had transposed for the soprano saxophone, provided a very clever contrast to the Sibelius and the Wagner that was to follow. The first movement, Allegro, was almost jazz-like and of course, Bach has been a favourite of various jazz musicians. This and the final movement, the Presto were a perfect show-case for Huw Wiggins’ spectacular technique. He demonstrated absolute control, rapid accuracy and impressive breath control. But in addition to technique, Wiggins displayed his obvious love of and involvement in the music, especially in the beautiful largo.

The mood changed for Wagner’s Tanhauser overture. This well-known luscious piece of music that introduces the Pilgrims’ Chorus and the theme of the struggle between good and evil was played for maximum dramatic effect. The trombones become the motif for the pilgrims and woodwinds for Elizabeth and so on.  It is a gorgeous piece of music, performed very effectively and clearly loved by the audience. Some may have found the tempo somewhat breathless but the dramatic ritardando towards the end completed a well-received performance. The Tanhauser was followed by another excellent performance by Wiggins on saxophone, again a contrast to both his previous Bach concerto and the orchestra’s Wagner. No breathlessness here despite the demanding speed. Milhaud’s Scaramouche, composed roughly two hundred years after Bach and one hundred after Tanhauser, was taken at a cracking pace with the strings valiantly striving to keep up with the saxophone.

Tchaikofsky’s Romeo and Juliet Overture was played with great feeling under Ian Brown’s baton, the wonderful conductor. He made the most of the story embedded in the music; the romance, family feuds, sword battles and the funeral march foretelling the overwhelming tragedy of the most famous romantic love story. The multi-layering towards the end allowed the harp space to create a touch of celestial beauty and suggested that, maybe, love conquers death. It was beautiful and received great applause. The final number brought us back to reality with a lively Slavonic Dance by Dvořák to complete a very happy mid-morning concert.

Postscript.  This was the second year of HSO performed on the floating stage as part of the Henley Festival and unlike last year, the audience were confined to the lawn which meant that most of the audience had a very poor view of the orchestra. Let’s hope this policy will be reviewed for next year’s performance and the audience allowed to sit in the  stand seats where there is a good view of the stage and excellent acoustics.