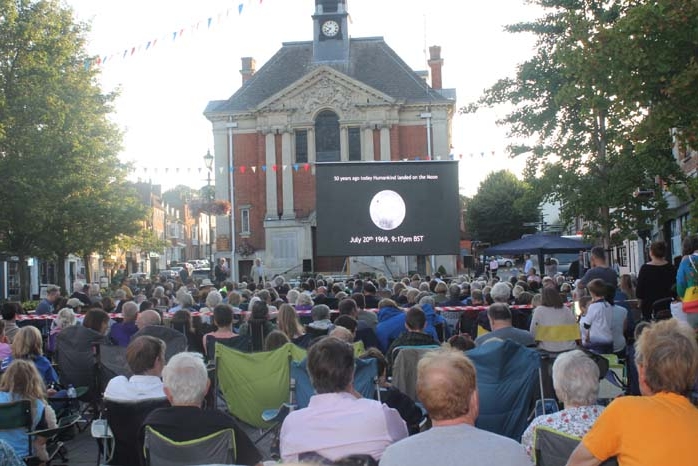 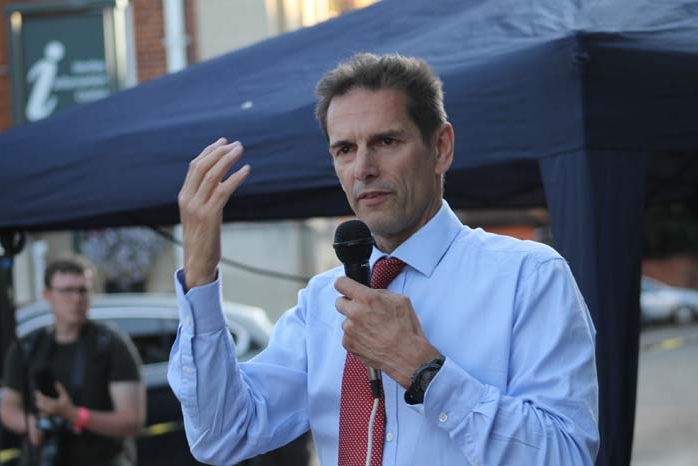 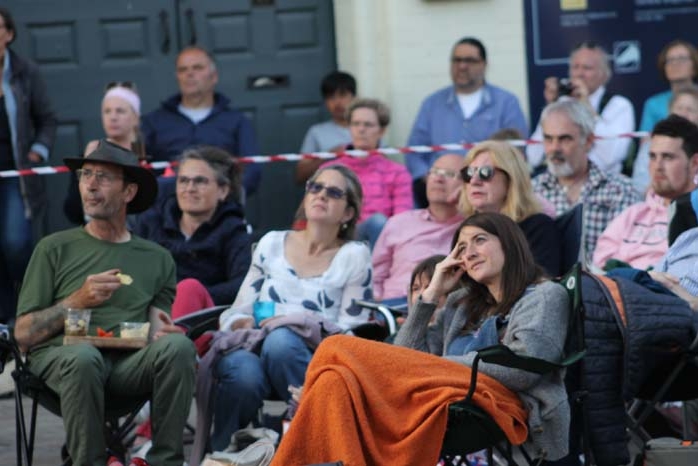 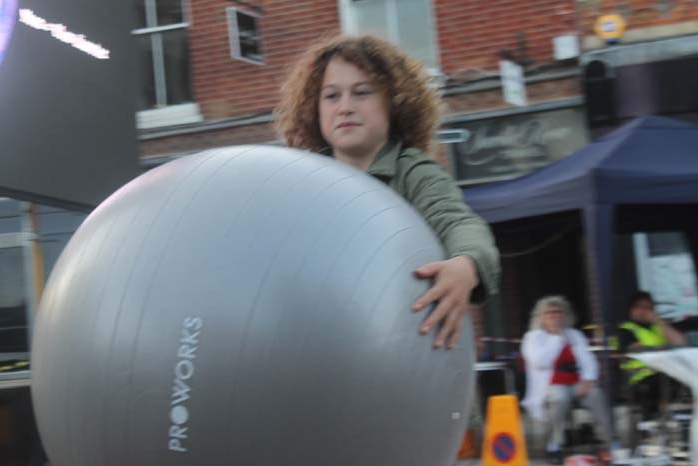 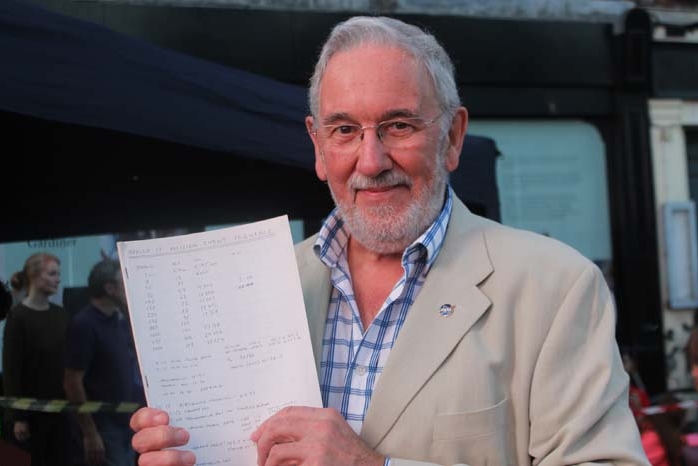 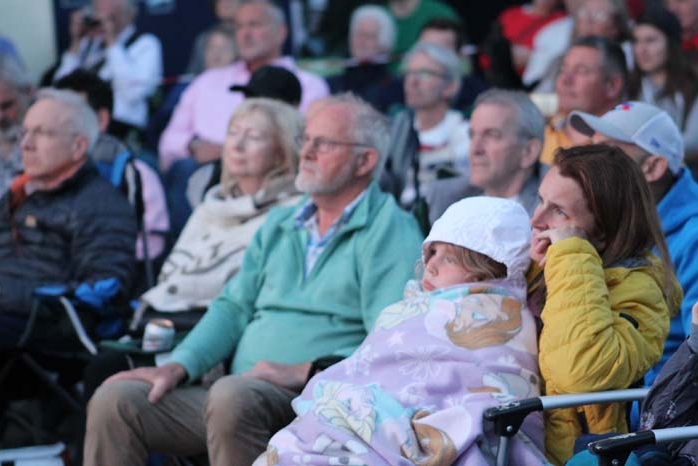 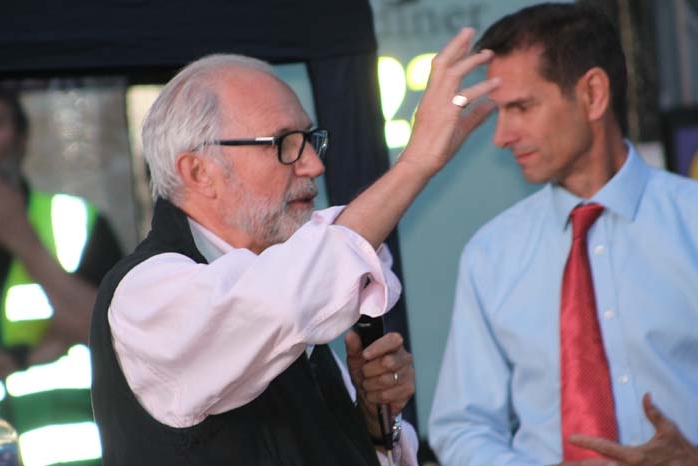 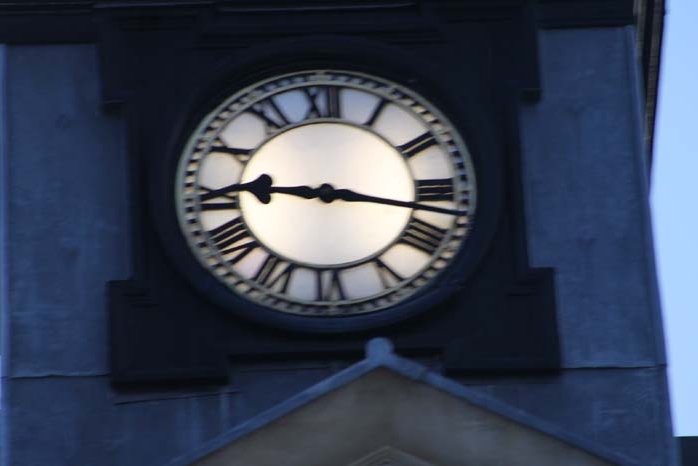 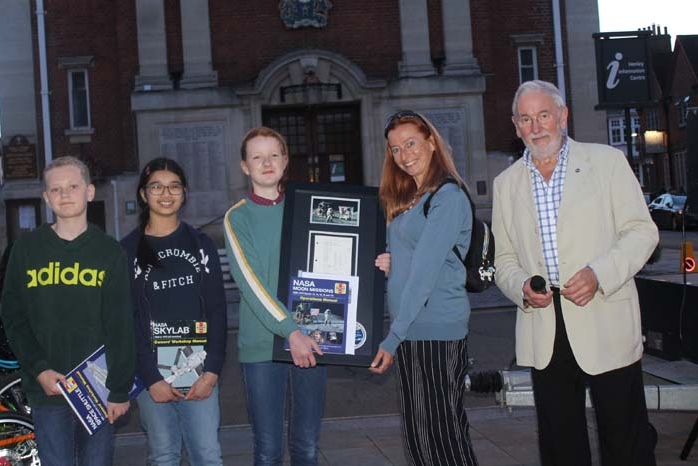 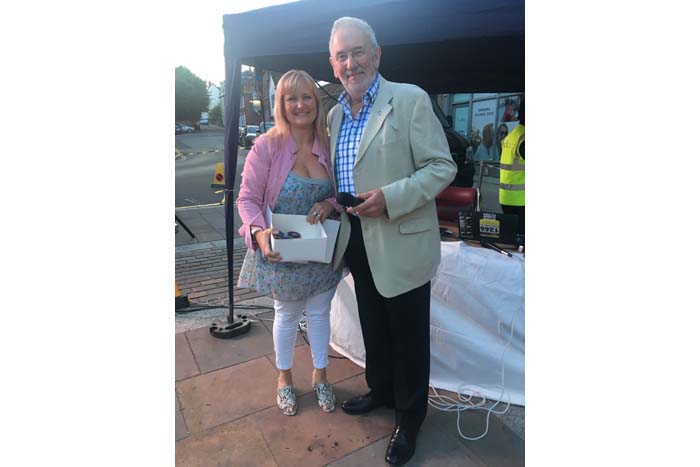 The historic 50th anniversary of the first men to land on the moon was marked in Henley by a truly galactic event on Saturday evening.

The evening was hosted by Dr Michael Warner, a Henley resident and collector of rare Apollo mission historic artefacts and was joined by  special guest Dr David Baker, a British space scientist present at NASA Mission Control during the Moon landings and a member of the NASA team who improvised emergency procedures to rescue the crew of Apollo 13.

With a packed Market Place, the evening started with music from 2001 Space Odyssey and Holst’s The Planets.  Nicola Baker from Lawlor’s The Bakers presented Dr Baker with some ‘out of this world’ space cakes before the Henley Mayor, Councillor Ken Arlett welcomed everyone.  Ken said, “We thank you Dr Baker for choosing Henley-on-Thames to celebrate with us, rather than one of the many other invitations that you have received. My recollection was working in an office in Sydney Australia, where someone brought a television set in for us to watch. I am sure old and young would have heard those immortal words, ‘Houston, Tranquillity base here……… the Eagle has landed?”

The presentation started from the year 1957 when the Soviet Union were ahead of the US when they launched the first intercontinental ballistic missile test into space. This was followed by the video of John F Kennedy’s speech in 1961 when he spoke at Rice University in Texas  outlining his dramatic and ambitious goal of sending an American safely to the Moon before the end of the decade.

Dr David Baker started working for NASA in 1965 aged just 21.  He said, “The average age back then was 26, it’s around 55 now!”  The drama on the night was overwhelming sat in mission control.  We used to call mission control the ‘trenches’.  We would monitor all aspects of the spacecraft with everything done with pen and paper.  We did have computers but they weren’t as good as a smart watch now.  People always ask whether I can talk about things but NASA communications were open to the world back then.”

To highlight the size of the moon and how far it is away from the earth, Dr Michael invited the audience to calculate the size. With Felix Richardson coming up with the right answer, he was then tasked with taking a grey-coloured gym exercise ball (representing the moon) to where he thought the distance to earth was in Market Place.

Recalling how it felt at 9.17 on 20 July 1969, Dr David said, “I’ve seen it a lot of times but the feeling still goes up!  What is the most important thing to remember is that because of size of imagery/maps we had we couldn’t see the boulders on the moon (anything smaller than a house).  It needed real piloting skills and Neil was a real master.”

Dr Michael then invited audience members to tell the crowd where they were that night.  John said, “I was working in the BBC Tower for ITV and our feed went down and we lost the historic pictures.  I realised that BBC were transmitting the footage so I pulled out a cord and plugged it in to ours which was all right until the BBC added a BBC caption to the pictures!”

This special event was partnered with Gillotts School who had run a Science competition for Year 7s to develop a design for a new moon lander.  Ella Wood won the competition and said, “My design was based on the parabola of aerofoil as less fuel is needed when there is less drag.”  She was presented with a special framed artefact at the exact time of the moon landing by Dr David.  The artefact was an original page from Apollo 17 Flight Navigation directory procedures checklist which spent 3 days on the surface of the moon inside the Lunar Module.

The audience were invited to also make a donation to Gillotts School and the event raised £1,000.

Dr Michael said, afterwards, “I was absolutely delighted with the way the event turned out.  I gather around 500 people came to watch, which is amazing.  Dr David Baker was excellent, bringing to life both the science and emotions of the NASA Apollo landings 50 years ago.  Along with David, the giant LED screen was the other tour de force, with its vibrant, brilliant colours and clear sound.  We also raised a significant sum for Gillotts School, which was kind of everyone.  Add in the sunny evening weather, and even the International Space Station flying overhead five minutes after the show finished, all in all I could not have wished for more.  Without the good folk of Henley and a number of visitors, the Town Management team and Gillotts School, none of this would of happened.  It was a big team effort, and great success.”