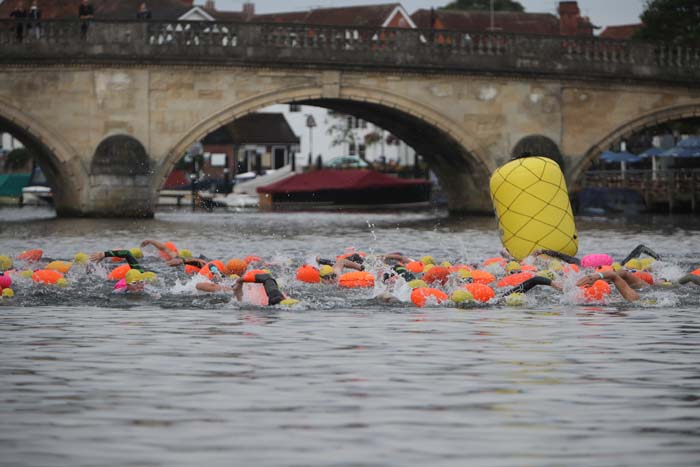 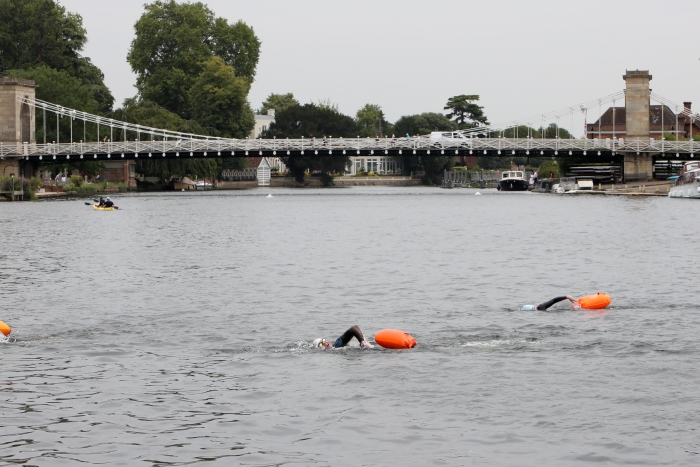 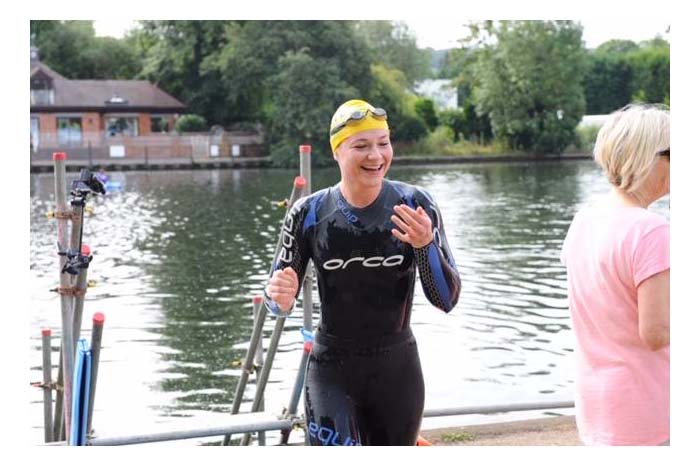 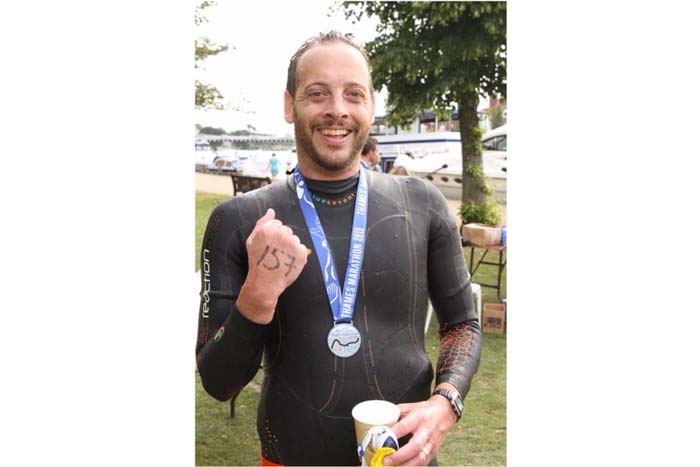 Over 850 swimmers took over the Henley to Marlow stretch of the Thames on Sunday in Henley Swim’s final event of the season, the Thames Marathon. Swimmers set off from the prestigious Leander Club in ten waves distinguished by different coloured swim hats between 7am and 7.45am on Sunday morning with the fastest swimmers leading the 14km journey downstream from the front.

The fastest swimmer, Haydn Burke (pictured above) from Surrey, completed the course in 2 hours 48 minutes. The fastest woman, second swimmer in and two-time winner of the Henley Classic, Vicky Cunningham (pictured above), from Cheshire, was close behind with a time of 2 hours and 51 minutes. The swimmers arrived in to Higginson Park where supporters were cheering them on, enjoying the weather and sampling the food and drinks on offer from various vendors.

The Thames Marathon has been named the Best UK Swimming Event by Racecheck for the past two years, so it is no surprise that swimmers travelled from far and wide to participate in the swim down this beautiful and iconic stretch of river. Competitors came from Australia, Canada, every corner of Europe, USA and Colombia to name but a few. Kirby Drawbaugh travelled from the USA specifically to swim the Thames Marathon on his 82nd birthday, making him the oldest swimmer in the event. As part of the safety plan, tow floats were essential but swimmers were encouraged to jazz them up and some took this opportunity to fly their home flag.

Swimmers from closer to home included Henley residents, 19-year old Henry Bell, who recently completed a non-wetsuit relay swim of the Channel and Sue Nadin, the first woman to swim the Henley Classic ten times. They completed the course in 3 hours 52 minutes and 5 hours 13 minutes respectively.

A huge variety of causes were supported by swimmers taking part in the Thames Marathon, including charities such as MIND, Coppafeel, Henley Music School, African Outreach, Parkinsons UK, Armed Forces Veteran’s Charity and many many more. Triathlete and competitive swimmer Sophie Etheridge swam the 2018 event to raise money for a racing wheelchair after being involved in a road accident. She now has the chair, partly thanks to the generosity of people at last year’s event, and returned to swim this year, completing the course in under 5 hours, achieving her target and beating her 2018 time.

The day finished around 3pm as the final swimmer, Raj Pol from Nottingham climbed up the steps on to dry land after being in the water for 7 hours and 58 minutes. The Thames Marathon was Raj’s first long distance swim and despite the huge challenge, he didn’t give up. He was greeted on the banks by a huge reception of supporters, volunteers and passers-by stopping to chant his name and cheer him through the final 50 meters. He was presented with a copy of Outdoor Swimmer magazine by Henley Swim co-founder Jeremy Laming.

Raj’s arrival into Marlow marked the end of the 2019 Thames Marathon and final Henley Swim event of this season, which has seen over 3,500 swimmers enjoying the Thames.

Entries for 2020 Thames Marathon will open in the Autumn, for more information www.henleyswim.com