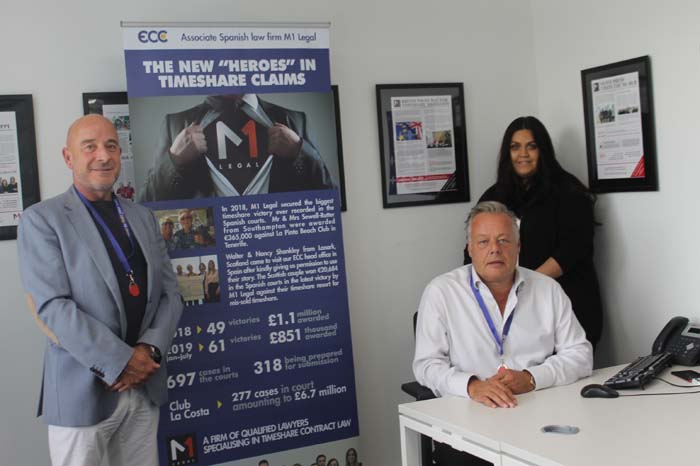 MORE than 250,000 UK residents mis-sold timeshare in Spain could be due compensation says European Consumer Claims Limited (ECC) who have recently opened a satellite office in Henley.

This follows a Spanish Supreme Court Ruling in January 2015 which ruled that all contracts signed after 5 January 1999:

Failure to comply with these rulings has resulted in contracts being deemed null and void with the return of all monies paid plus compensation. This has often resulted in the client receiving double what was initially paid for the purchase of their timeshare.

Chief Executive Officer Andrew Cooper, who set up ECC in June 2016, said: “When timeshare was first sold in the late 1980s early ‘90s, clients bought a fixed week in a fixed apartment which was registered at the local Land Registry and was correctly sold compliant with Spanish law.

“However, the timeshare industry invented intangible timeshares represented by points and floating time with no identifiable week or unit.

“I have always worked on the peripherals of the timeshare industry. Originally I helped many clients get out of their timeshares when the biggest problem was the annual management fee which increased out of proportion.

“Up until 2008 there was a re-sale market, albeit the amount of monies received was only a fraction of the original price.

“In 2008 when the property market crashed it was impossible to re-sell a timeshare and, within a short period of time, timeshare owners had to pay specialist re-sale companies to dispose of their timeshare ownership which for many owners became a financial liability.”

European Consumer Claims associate law firm M1 Legal in 2018 – with a current success rate of 90 per cent – secured what is believed to be the biggest timeshare victory in the Spanish courts with €365,000 for Mr and Mrs Sewell-Rutter against La Pinta Beach Club in Tenerife. Since the company started business in 2017, M1 Legal has secured 140 victories, totalling £2.2m. It is not just Spain where timeshares have been mis-sold but in all European countries.

If you think you have been mis-sold, Mr Cooper recommends: “Find your original documents and then contact us and we will enter the contractual details into our system. This will check whether you have a potential claim, with an estimate of compensation that may be awarded.

“You can then either meet a consultant at one of our offices or we can arrange a video conference call. Once M1 Legal has presented your case in court, you will then be advised to cease paying any further maintenance fees.

“The claims process is not quick as it takes around 12-16 months for the Court of First Instance to make their decision. Most resorts appeal to the higher court, even though they have no grounds to do so, and this further decision can take another 12 months.”

Mr Cooper added: “Most timeshare resorts have deep pockets and will do anything in their power to prevent companies such as ours representing clients who wish to claim against them. The most important thing is to be patient.”

The UK Finance Control Authority (FCA) investigated Barclays Partner Finance for alleged mis-selling of loans totalling £47m for timeshares between April 2014-2016 by Azure Services Limited (Azure Island Residence Club in Malta) who were not authorised by the FCA to carry out credit brokering.  Mr Cooper said: The FCA should be in a position by September to rule on the validation of these loans and to consider client detriment when making their decision.”

As well as the Regus Henley Building in Newtown Road, Henley, ECC has seven satellite offices in the UK and a Head Office based in Malaga, Spain employing over 60 staff. “We chose Henley for our latest office as it is a very attractive location with easy access for transportation,” said Mr Cooper. “Our office is of a contemporary design with room to expand. This is a beautiful town, where we have our bank and also resident Clive Hemsley who assists us with our media internationally.

“We also have arrangements with hotels close to each satellite office where our clients can stay for a free night with breakfast after their meeting with our consultant.”

Mr Cooper said that ‘timeshares’ are still being sold. “They have been renamed under a different wrapper as ‘fractional ownership’ but instead of 1-2 weeks, you are sold 6, 8 or 12 weeks and instead of costing £10,000 they cost anything between £40-50,000.  These are still being mis-sold.

“My advice would be to go on an individual package holiday which will save you a lot of money both short-term and long-term.”

ECC will be sponsoring our Have Your Say (online letters page) over the next few months.  If you have something you want to get off your chest email us at news@henleyherald.com

For more details about ECC go to https://ecc-eu.com/

Regatta for Disabled to Celebrate 10th Anniversary
Scroll to top