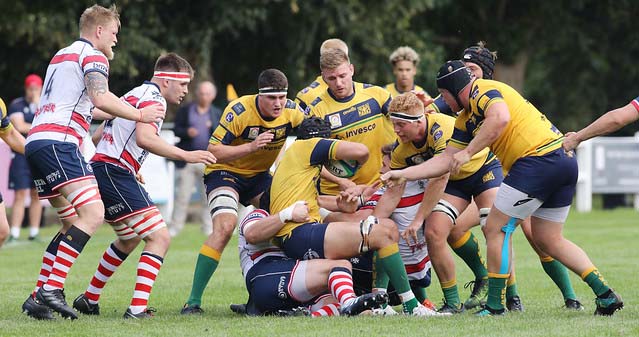 Henley Hawks had a tough afternoon on Saturday as they came up against an impressive Rosslyn Park outfit at Dry Leas and succumbed by 61 points to nil in a pre-season friendly.

The Hawks, with twelve of last years 1st XV squad unavailable for this match, fielded a much changed side which included a number of younger squad players and despite the scoreline was a good learning experience for the them which has given them much to build on.

Rosslyn Park, who finished in third place in National 1 last season, have made some impressive signings over the summer in their bid for promotion to the Championship, were well drilled, organised and clinical and too strong for the young Hawks side.

Having said that, the Hawks showed an excellent appetite for the contest and their effort, endeavour and commitment could not be faulted and they can count themselves unlucky not to get onto the scoreboard.

It was evident early on that the visitors were a strong outfit, dominating the early exchanges and they scored two tries in the opening ten minutes, both converted to move into a 14-0 lead.

Rosslyn Park didn’t have it all their own way and the Hawks responded with some good quality possession of their own and some good work in the loose from Scott White and Marcus Lowe. Henley came close to scoring but a knock on saw the visitors able to clear.

The Hawks were finding it difficult to win regular, quality possession and after losing their own line out, Park increased their lead with an excellent try from their backs.

The Hawks continued to battle well with new signing Angus Hinton building well on last weeks appearance and there were some good touches from Charlie Wicks.

A good break from Hawks scrum half Ewan Fenley set up prop George Primett who made a good charge into the Rosslyn Park defence before the visitors were able to clear.

Rosslyn Park then set up a 35-0 lead at the break with two further tries with quality handling that showed why they are a top National 1 side.

With the Hawks ringing the changes in the second half, Rosslyn Park scored two quick tries.

The Hawks kept playing however and tried to up the tempo of their game. This rattled the visitors who gave away a number of penalties and looked as though the Hawks would get some reward for their efforts. However it was not to be and the Londoners scored two further tries before the referee brought an end to proceedings.

Too much should not be read into the result of the game, it  was a good workout for the Hawks against quality opposition and has given some useful experience to the newer members of the squad.

The Hawks now go back into training in preparation for the first league game of the new season at home against Bury St Edmunds on Saturday 7 September. In the meantime, there is an inter squad game, the the Blues v Golds, on Tuesday 27 August at Dry Leas, kick off 7.30pm. This will give the coaches a chance to see how things are progressing before finalising the squad for the first game.

In a Galaxy Far, Far Away after Rewind South Festival…
Scroll to top